Though not quite a rival for the Dodge Durango SRT Hellcat, the 433-horsepower Tahoe is still pretty quick for a full-size SUV. 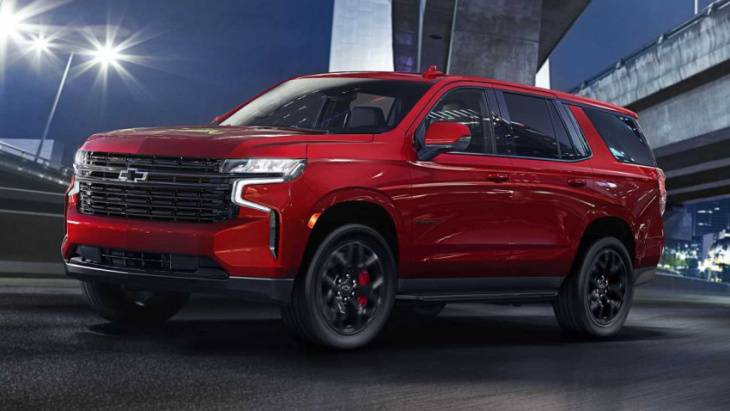 No one really expects a three-row SUV to offer sports car levels of performance, but that doesn’t stop automakers from trying. Witness the 710-horsepower (529-kilowatt) Dodge Durango SRT Hellcat for proof, as well as the Cadillac Escalade V and its 682-horse (509-kW) V8. Now, it’s Chevrolet’s turn to get in on the performance SUV game – albeit with substantially less power.

This is the 2023 Chevrolet Tahoe RST Performance Edition. Although it lacks the supercharged grunt of the hellish Durango and Caddy V, it still packs 433 hp and 467 pound-feet (323 kW and 633 newton-meters) worth of wallop from its naturally aspirated 6.2-liter V8. Upgraded from the engine found in the regular Tahoe RST, the Performance Edition’s mill gets a higher-performance intake and exhaust to free 13 extra ponies from the corral, as well as 7 more lb-ft of torque (10 kW and 9 Nm). 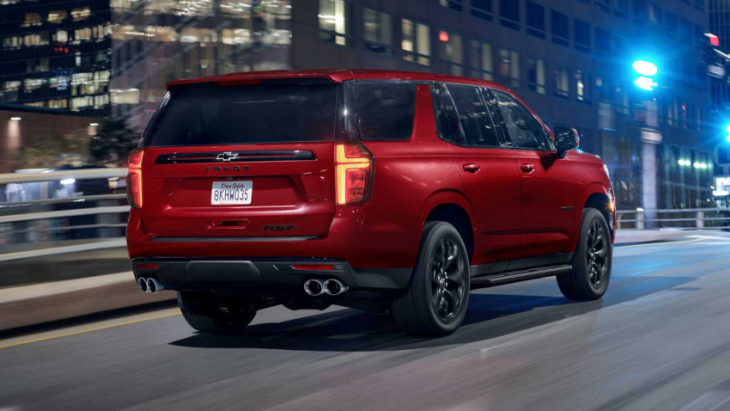 Chevrolet says the added grunt helps the Tahoe RST Performance get to 60 miles per hour in 5.8 seconds, cutting 0.2 ticks off the standard RST’s time. Ditto the quarter-mile, which passes by in 14.2 seconds. The sporty full-sizer can also hit 124 mph if given enough road, compared to 112 on the regular RST.

The Performance Edition takes inspiration from another hard-core Tahoe when it comes to handling. Borrowing the stabilizer bars, springs, and dampers from the Police Pursuit Vehicle, the Performance Edition rides 0.4 inches lower in front and 0.8 inches lower in the rear. Those stiffer suspenders and marginally lower center of gravity might help handling, although the Tahoe still probably won’t carve up the autocross terribly well. At least there are Brembo brakes front and rear that provide better stopping power, improved feel, and more aggressive appearance thanks to red-painted calipers.

More to the point, the recently revealed Ford Expedition Stealth promises even more power, torque, and towing capacity – along with similar interior room – for about 82 grand. It also looks more distinct from lesser Expeditions, broadcasting its barn-storming intentions from across the parking lot.

So where does that leave the Tahoe RST Performance Edition? For those who are a bit less power-mad (or who can’t say no to the mellifluous bellow of a Chevy V8), it should be a sporty, competent family hauler with seating for eight. The Performance’s cop suspension might also carry some cachet. But whether it’s aggressive enough to join the aforementioned full-size SUVs at the top of the performance heap remains to be seen.

This 1982 Corvette emerged from the factory with good looks and poor performance, but that’s no longer the case. As most Corvette fans are well aware, America’s sports car – like all performance-focused vehicles at the time – went through a bit of a rough patch in the 1970s ...

For 2024, the Chevrolet Silverado 2500/3500 promises some heavy-duty additions and enhancements that should have the big trucks from Ford and Ram obsessively checking their rearview mirror for a grille bearing a Bow Tie. In our full model preview of the redesigned Silverado HD — one of Cars.com’s most ...

Photo: General Motors General Motors has just posted record sales of the Chevrolet Bolt EV (including the Bolt EUV) in the third quarter of 2022. And you know what? Despite having all of its units recalled to replace potentially defective batteries and facing a very uncertain future, the small ...

High-Lift vs Low-Lift Camshafts: When You Actually WANT to Make LESS Power

The Evolution of the Z06: Comparing the C5 Through C8 Z06 Generations on Track