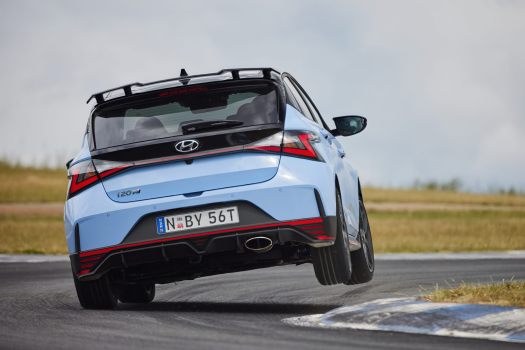 Not long after it was named as Top Gear’s Performance Car of the Year during its annual Speed Week test, the Hyundai i20 N was also named as the publication’s outright Car of the Year.

The i20 N follows in the footsteps of the i30 N and Veloster N and directly rivals the Ford Fiesta ST. It didn’t just beat out 25 other contenders during the Speed Week test but Top Gear was so impressed with its breadth of abilities that it had to also give it its highest accolade, according to Top Gear Magazine editor Jack Rix.

“We already knew how brilliant the i20 N was after it brushed aside 25 other competitors at our recent Speed Week test to claim our coveted Performance Car of the Year title,” Rix said. “But you don’t win the top prize in our annual Awards without proving your all-round brilliance. Having shone on British racetracks and B-roads, we decided to throw it in at the deep end to prove its greatness, with an adventure across the Australian outback. What we discovered was a low-slung hot hatch that remained both comfortable and completely unflustered across oppressively large distances, and on washboard road surfaces. A little Hyundai hatchback that did so well, so far out of its comfort zone, that it was impossible to do anything but make it our overall Car of the Year.”

Powering the i20 N is a 1.6-liter turbocharged four-cylinder with 201 hp and 203 lb-ft (275 Nm) of torque. This engine is mated exclusively to a six-speed manual transmission and a mechanical limited-slip differential that drives the front wheels.

Top Gear also named Hyundai as its Manufacturer of the Year, thanks to vehicles such as the i20 N, i30 N, Kona N, NEXO, and the all-electric Ioniq 5.

“We are truly honored to receive two prestigious awards from one of the world’s most influential and enjoyable automotive publications, especially at a time when Hyundai’s global brand has never been stronger,” executive vice president and global chief marketing officer at Hyundai Motor Company, Thomas Schemera, said. “We know the team at Top Gear is very demanding and have exacting standards, so winning the Car of the Year award for i20 N is certainly an achievement. The Manufacture of the Year is a testament to the direction that Hyundai is committed to as we transform into a smart mobility solution provider. Everyone at Hyundai can be proud of this recognition.”

The Giugiaro-designed show car signified Hyundai’s birth as an independent car maker, and serves as inspiration for the firm’s latest EVs

2024 Hyundai i20 facelift spied for the first time

Hyundai i20 Diesel To Be Discontinued From India Next Year

Hyundai i20 diesel to be discontinued in 2023

Hyundai i20 N Line vs Venue N Line: Which N Line model would you choose

Hyundai i20 crash due to tyre burst: Disappointing BlueLink experience

Finally got my new Hyundai i20 after 5 months of waiting