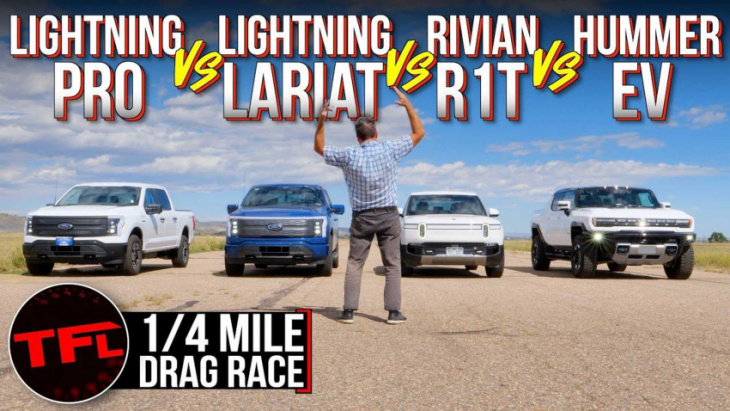 We’ve been waiting for years and years wondering when electric pickup trucks would finally come to market, and now they’ve arrived. Interestingly, all three electric trucks that are available on our shores came to market around a similar timeframe, and all beat the Tesla Cybertruck to market, but that’s a different story for a different day.

We’re talking about the fully electric Ford F-150 Lightning, the Rivian R1T, and the GMC Hummer EV. These trucks are all capable, they have lots of range, and they’re accommodating inside. However, aside from all being electric pickups, they’re not very alike.

The Ford F-150 Lighting is not only the cheapest electric truck on the market today, with a starting price of around $40,000, but also one of the cheapest EVs you can buy in the States. It joins a very small list of EVs that still come in around $40,000, and the list is shrinking. Thankfully, the list stands to grow soon as more automakers have plans to bring more affordable EVs as soon as 2023. If you simply want a traditional truck with an electric powertrain, the F-150 Lightning is the only option, at least for now.

The R1T is produced by startup automaker Rivian, which many people have compared to Tesla. Rivian’s products offer a nice mix between rugged and luxurious, and the company’s marketing campaign centers around “Adventure Vehicles.” The R1T – as well as the brand’s R1S three-row SUV – may be a good choice for you if you’re a fan of the Jeep Grand Cherokee or any number of Land Rover vehicles, but you’re hoping to go electric.

There’s honestly not a whole lot to say about the GMC Hummer EV. It really speaks for itself. GM decided to go way over the top with the expensive behemoth, perhaps to impress the large audience that’s touting Tesla’s ridiculous Cybertruck.

At any rate, now that there are multiple electric trucks available in the US, it was high time to pit them against one another. We’ve seen various matchups featuring some of these trucks racing, but nothing quite like this.

The Fast Lane Truck drag races the cheapest electric truck – the F-150 Lightning Pro base model – against the most expensive, the Hummer EV. The Rivian R1T and the more expensive F-150 Lightning Lariat with the Extended Range battery pack are also on hand.

It’s important to note that while the base F-150 Lightning comes with all-wheel drive, it’s fitted with Ford’s Standard Range battery pack, which means it’s also not as powerful. That said, as you can see in the related stories above, TFL previously put the more powerful version against the quickest truck ever made, the Ram TRX, and the electric truck took the win. So, the winner of this race is arguably the quickest stock truck on the planet. Ready to place your bets?

How much ground clearance does a Rivian R1T offer? The Ram 2500 Power Wagon offers 14.2 inches of ground clearance The Rivian R1T is revolutionizing truck performance Traction control and off-road driver aid software comes in handy in certain 4×4 situations. But on some trails, there is no replacement ...


View more: The Rivian R1T Offers More Ground Clearance Than Any Other Truck

The company is not able to keep up with demand and takes a break until the balance improves.

GM upgrades Ohio plant to build electric drive units Electrek’s Take General Motors is preparing for an all-electric future as the automaker announced Friday it would be investing $760 million into its Toledo, Ohio, plant as it gets the facility ready to produce drive units for future GM EV ...