Taking a tour of the Davidson Legacy Cottage in Scotland while a friendly welder fixes up his bike is all in a day's riding. 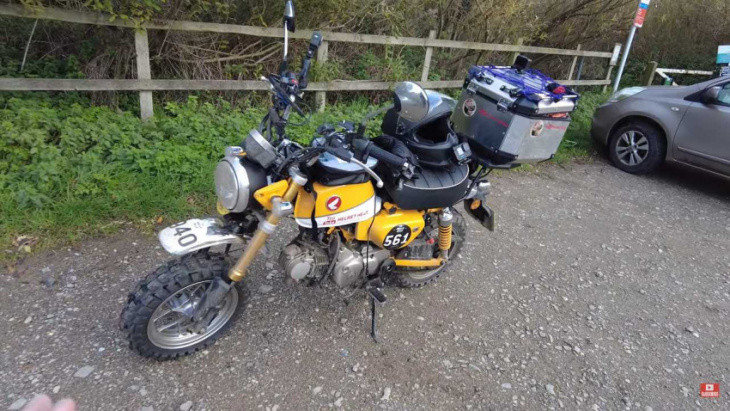 Let’s say you’ve got a Honda Monkey, and let’s say you love riding it (but I repeat myself). Even if you absolutely adore it, would you want to ride it all the way around the U.K.? Most likely, some people would, and some people wouldn’t–but in any case, if you want to see someone else do it, YouTuber Helmet Head recently undertook this journey on his little yellow Monkey in 2022.

He set his official starting point in the beachside town of Hunstanton in Norfolk, and then started riding up north, rain or shine. In fact, the first day of his journey was absolutely pouring down rain nearly the entire time, which left him totally soaked and was interfering with his ability to charge his phone. That was a definite problem, since he was also using that phone for navigation—but despite the setbacks, he did eventually get it sorted out well enough to continue.

Along the way, he’s been posting on all his social media channels—and this video goes to show one of the most amazing things about the moto community. Now, Helmet Head is traveling with a support vehicle—but he still has a whole lot of equipment that he needs in the hard Givi top case he has mounted to a rear rack on his Monkey. Also, that case serves as a nice impromptu backrest when he needs it, which comes in handy. So, the fact that the rack started to bend under the additional strain from road vibrations was worrying for some very obvious reasons.

That’s where the local moto community in Scotland (where he was riding at the time) came to the rescue, though. See, he’d posted a request for help on his Facebook page, where there’s an active community following his journey. A local man named Rory roped a friend with welding skills and equipment into helping Helmet Head out with some reinforcements while the man himself took a wee break and took a tour of the Davidson Legacy Cottage.

As it turned out, Rory’s married to one of the Davidson Legacy Preservation Group members, who participated in giving the tour—so it’s a family affair. Unfortunately, bad weather recently has caused some water damage to the Davidson Cottage, and they’re currently looking for help from local construction firms to fix things up before it gets any worse. (We’ll include a link to their Facebook page, where they’ve made this request, in our Sources if you can help out.)

It’s an epic journey, made even more epic by the fact that bike people can be so incredibly kind and helpful to a fellow rider traveling through their area. If you want to follow Helmet Head’s journey, he’s posting videos regularly from this adventure on his YouTube channel.

Keyword: This Guy Is Riding All The Way Around The U.K. On His Honda Monkey

Honda is recalling more than 115,000 Ridgeline pickups to address an issue that plagues those who actually use their trucks to do truck things. Per the company’s notice to NHTSA, opening and closing the tailgate on 2017-2019 model Ridgelines can damage a wiring harness that carries the signal for ...

Who said the CR-V had to be boring?

TOKYO — Honda said it is developing Level 3 self-driving capability to function at any speed below legal limits on highways by the second half of the 2020s as it strives to eliminate traffic deaths involving its vehicles. Honda in March 2021 became the world’s first carmaker to sell a ...

Honda is adding a slew of new features to its driver-assistance system known as Sensing 360 as part of a goal to eliminate fatal traffic collisions involving Honda by 2050. According to Honda, nearly 7 million vehicles on the road today are equipped with Honda Sensing 360 and its ...

Honda will launch a version of its popular CR-V compact crossover powered by a hydrogen fuel cell, the automaker announced on Wednesday. The hydrogen-sipping CR-V will arrive in 2024 and be built at the former plant of the Acura NSX supercar, located in Marysville, Ohio. NSX production came to ...


View more: Next Honda Sensing 360 to pull ahead of Tesla FSD? World's first L3 autonomous driving to launch in China