Many may consider the 2023 Toyota Crown a great new addition to the small SUV class, but don’t tell Toyota. Hardly averse to changing things up, the company plans to release the resurrected Crown onto the full-size sedan market after sidelining its long-running Avalon models. However, rather than compete with subcompact SUVs or sedans, Toyota created a new label for what looks like a juiced-up sedan with the lift and control of a small SUV.

Will the new Crown be Toyota’s jewel? 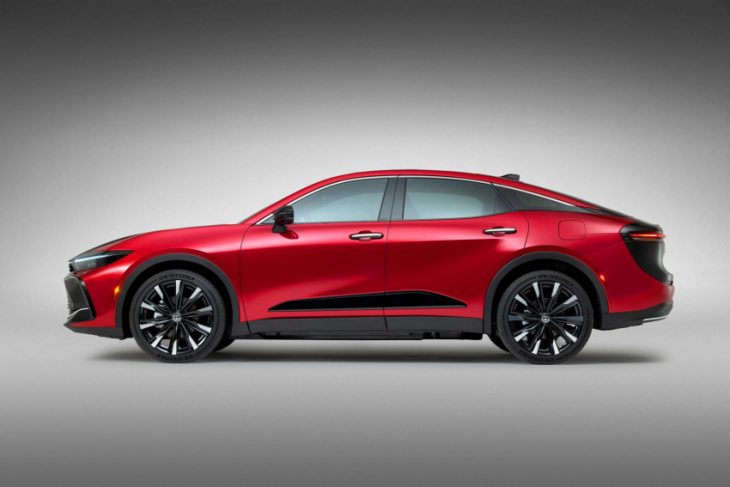 According to Toyota‘s press release, the 2023 Toyota Crown delivers intuitive driving, power, looks excellent, and handles well. Thanks to the new design, the new Crown conveys power and performance despite maintaining its place as a sedan. There are three base grades: XLE, Limited, and Platinum. The XLE and Limited packages feature a standard 2.4L hybrid powertrain system, while the Platinum package debuts Toyota’s Hybrid Max powertrain with 340 horsepower. All trims come with standard electronic on-demand AWD.

The Toyota Crown comes in Black, Oxygen White, Magnetic Gray Metallic, Heavy Metal, and Supersonic Red colors with a black interior, though the Limited grade adds macadamia and a mixed black and chestnut option. Toyota equipped the XLE and Limited packages with heated front seats, a Toyota Multimedia System, and a 12.3″ touchscreen with six speakers. The Limited adds LED headlights, a panoramic roof, more heated seats, an 11-speaker JBL sound system, and a comprehensive safety system. On the other hand, the Platinum package gives you an Adaptive Variable Suspension and six-speed driving.

While all of this sounds good in any model, what’s under you makes this apparent small-size SUV the first lift-up sedan on the market. It turns out that it’s not so much the car itself but wheels and tires.

What on earth is a lift-up sedan?

Upon returning the Toyota Crown name to the North American market, Toyota designed a new middle ground between sedans and SUVs. Of course, many see a sedan at first glance, but Toyota purposely blurred that line by adding space between the driver and the ground beneath them and creating a new class of small but spacious cars.

According to Toyota, the Crown’s base models, the XLE and Limited packages, boast impressive 19″ alloy wheels. At first glance, these wheels are slightly larger than your typical sedan, though the average consumer may not notice immediately. However, with the 21″ Platinum wheels, suddenly, your fun sedan takes on a new, unique look that is quite difficult to label.

According to the official press release, this lifted design is critical, as both sets of tires are several inches larger than your average sedan’s. This may not matter to casual drivers, but those who push the cargo limits but prefer a small car will grow to appreciate the added durability that the larger tires offer. Time will tell if the changes work, but this is how Toyota wants to bring its classic nameplate to the 21st century.

The Toyota Crown’s place in the lineup

The Toyota Crown offers potential buyers a middle ground between its upcoming Corolla family’s compact size with the ruggedness of the Corolla Cross Hybrid. The Crown is one of the oldest nameplates in the industry for a good reason. Still, with the latest model’s return to the American market, Toyota’s filling in the blanks between its lineup and ensuring everyone has a chance to get behind the wheel.

Will this lift-up sedan be a new fad that never goes anywhere or the first in a long line beyond Toyota? Tim will tell, but Toyota hopes its reboot resonates with new buyers and the Crown name’s return is permanent this time.

Keyword: The 2023 Toyota Crown Is a ‘Lift-Up Sedan’ Not a Small SUV