Many Honda and Toyota buyers are moving away from those brands in favour of automakers that offer electric vehicles (EVs); and while Tesla still leads the pack in battery-power sales in the U.S., its dominance in that segment is slipping, according to a new report from S&P Global Mobility.

The study found that most of Tesla’s market-share loss is due to consumers buying EVs that are priced below US$50,000, “where Tesla does not yet truly compete,” the report said, adding that “Tesla’s CEO Elon Musk confirmed (again) during a recent earnings call that the company is working on a vehicle priced lower than the Model 3, though market launch timing is unclear.”

No matter the price point, S&P’s preliminary data suggests that people buying EVs in 2022 had largely moved away from Toyota and Honda, which have been very slow to embrace the battery-specific segment, even though they’ve successfully offered hybrids, plug-in hybrids, and hydrogen fuel-cell vehicles. The study found that the Tesla Model 3 and Y, Ford Mustang Mach-E, Hyundai Ioniq5, and Chevrolet Bolt have all been very successful in capturing buyers who had previously purchased from those two Japanese automakers.

In the U.S., most EVs are pricier models and going to buyers with higher incomes, but S&P said that’s in part because Tesla sells the majority of them. In the first nine months of 2022, there were 525,000 EVs registered in the country and nearly 340,000 of them were Teslas. But as more affordable battery vehicles arrive, and “offering equal or better technology and production build,” the report said, “Tesla’s ability to retain a dominant market share will be challenged going forward.”

S&P predicts EV nameplates will grow from the current 48 to 159 by the end of 2025, “at a pace faster than Tesla will be able to add factories.” That automaker’s range is “expected to grow to include Cybertruck in 2023 and eventually a Roadster, but largely the Tesla model lineup in 2025 will be the same models it offers today.” It still expects Tesla’s unit sales will grow, even as its share of the EV market declines.

Despite shortages caused by supply-chain issues, EVs gained 2.4 points of market share year-over-year as of September 2022, and achieved 5.2 per cent of all light-vehicle registrations. Tesla’s Model Y and Model 3 combined accounted for 56 per cent of those vehicles. Ford was in second place, although the 27,800 units of the Mach-E sold were only about 8 per cent of Tesla’s volume. 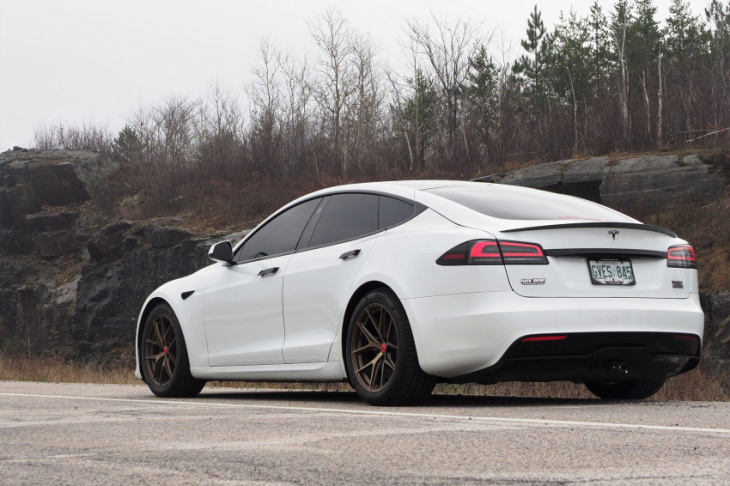 Tesla’s four models – 3, Y, S and X – and the Mach-E accounted for the top five EV registrations during that period, followed in order by the Chevrolet Bolt and Bolt EUV, Hyundai Ioniq5, Kia EV6, Volkswagen ID.4, and Nissan Leaf.

The study found that very few EV owners return to gasoline vehicles. The Model Y has 60.5 per cent brand loyalty, and nearly 74 per cent of buyers move to it from other brands – primarily Toyota, Honda, BMW, and Mercedes-Benz. For individual models, those buying a Model Y are most likely trading in a Lexus RX, Honda CR-V, Toyota RAV4, Honda Odyssey, or Honda Accord.

Jil McIntosh specializes in new-car reviews, auto technology and antique cars, including the two 1940s vehicles in her garage.