Tesla’s Semi has finally shipped to its first customer: PepsiCo. 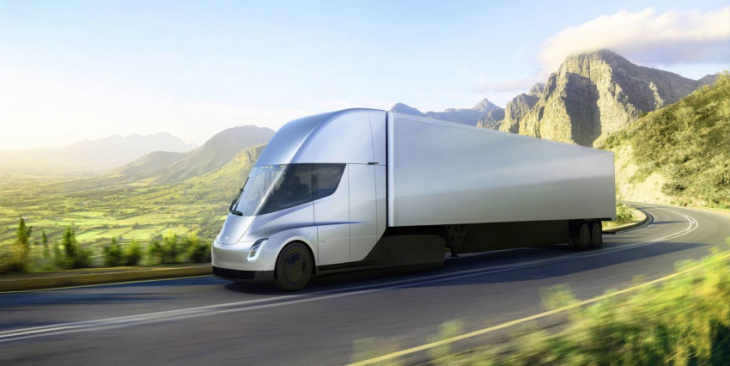 After five years, Tesla has finally delivered its first Class 8 truck. Aptly named Semi, this Tesla freight hauler was delivered during the live presentation you see above to drink giant PepsiCo. Despite the delay in the delivery, the folks at Tesla and PepsiCo marked the delivery with the launch celebration at the Tesla Semi factory in Nevada.

Obviously, a single Tesla Semi delivery isn’t going to reset the entire trucking industry. That said, this 500-mile-range Tesla Semi—like the Toyota Class 8 fuel-cell powerplant—and other battery-electric rigs could cause a shift in short-haul trucking.

Tesla is admittedly light on the specs of its Semi, but the company did mention some of its hardware. The company says it uses a tri-motor powertrain, which Elon Musk says is essentially the system found in the Model X and Model S Plaid variants. This version only engages two of the motors on demand, with the rear-most motor designed to be as efficient as Tesla engineers could make it while being the main motor.

Tesla hasn’t revealed power figures, but the presentation notes it has three times the power of any diesel truck on the road right now. That might be taken with a grain of salt, considering the Volvo FL16 advertises up to 750 hp and 2618 lb-ft of torque. So while “three times” might be ambitious, we’re sure Tesla will publish the official numbers eventually.

Showing the crowd that this rig can actually live up to the 500 miles-per-charge claim, Tesla documented the truck’s journey from Los Angeles to San Diego. While Musk showed only a time-lapse video of the trip, he promised that there wasn’t any movie magic and Tesla would publish the entire trip to its YouTube channel.