Tesla's cars are priced at the luxury level, so it's a stretch for mainstream shoppers to make the switch. 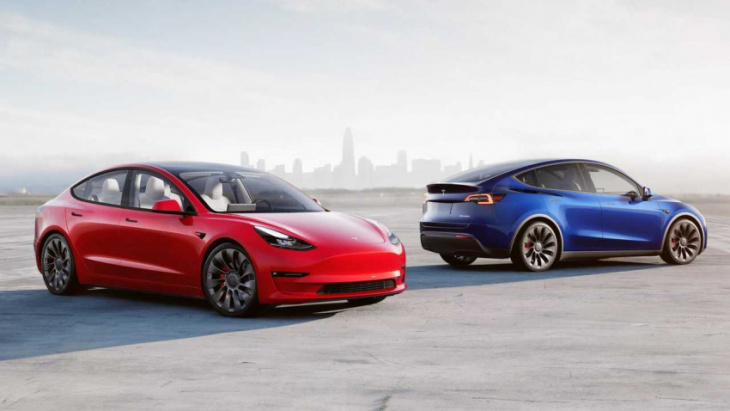 We just recently shared information with you from a study published by S&P Global Mobility. The details had to do with Tesla’s EV market share, which is still strong, though rivals’ cheaper models are beginning to chip away at the US EV maker’s strong lead. The same study shows that more Tesla buyers come from Toyota and Honda than from any other brand.

While it may come as no surprise to some folks that buyers of mainstream Japanese cars and SUVs may make the move to Tesla, it’s interesting, especially if you dive a bit deeper. As we reported earlier, Tesla is a luxury brand, whether or not you personally believe its cars are luxurious. It calls itself a “premium” automaker, and the price of its vehicles help dictate its luxury status.

This means that Tesla competes with luxury brands that price their cars similarly. We noted that based on details in the S&P Global Mobility report, it was actually the cheaper, “mainstream” EVs that are beginning to take some market share away from Tesla. However, on the flip side, it seems shoppers who are coming to Tesla aren’t necessarily all leaving BMW and Mercedes, though these brands are seeing customers turn to Tesla as well.

Looking at S&P Global Mobility’s data reveals that while Tesla’s “Conquests” include a significant percentage from the aforementioned German luxury automakers, more than double the percentage comes from Honda and Toyota. In fact, if you add the two brands together, the data shows that nearly 30 percent of the total conquests come from the two Japanese automakers. 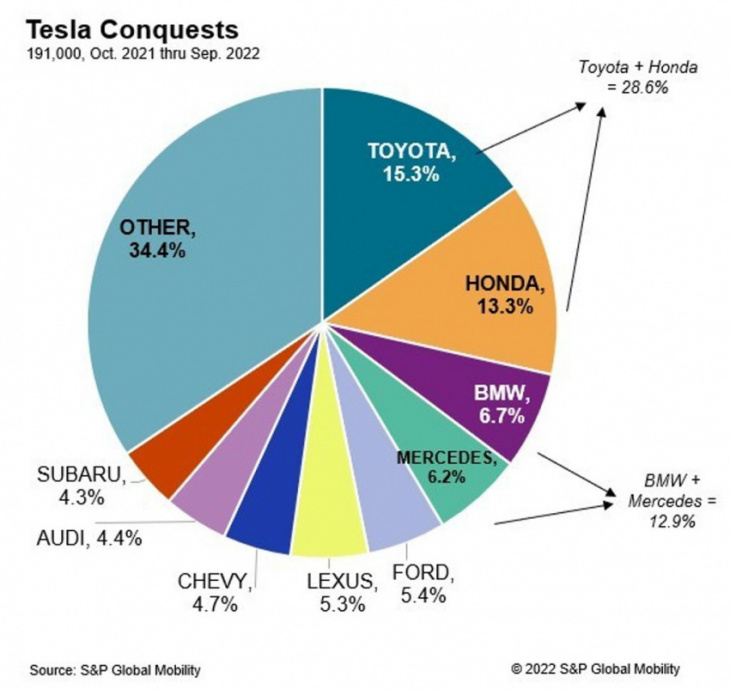 As you can see, based on data from October 2021 through September 2022, about 15 percent of Tesla buyers came from Toyota and 13 percent from Honda. Meanwhile, nearly 7 percent came from BMW and 6 percent from Mercedes.

It’s interesting to learn that while it’s primarily non-luxury EVs that are grabbing some of Tesla’s market share thanks to the fact that they’re more affordable, people are leaving some of the more affordable brands to buy a Tesla. Why?

There’s really no way to know for sure, but we do know that neither Toyota nor Honda has moved quickly with EVs. Since these brands don’t yet have a lineup of compelling electric cars and SUVs to choose from, people may be looking elsewhere, and Tesla is arguably the most well-known choice when it comes to EVs.

On the flip side, Ford and Chevy owners that want to graduate to an EV may choose to stick with their current brand rather than consider a Tesla. Both Ford and GM already have some Tesla rivals in their lineups, and both plan to add many more in the near future. What do you think? Leave us a comment.

Keyword: Tesla Buyers Leave Honda And Toyota Much More Often Than Other Brands