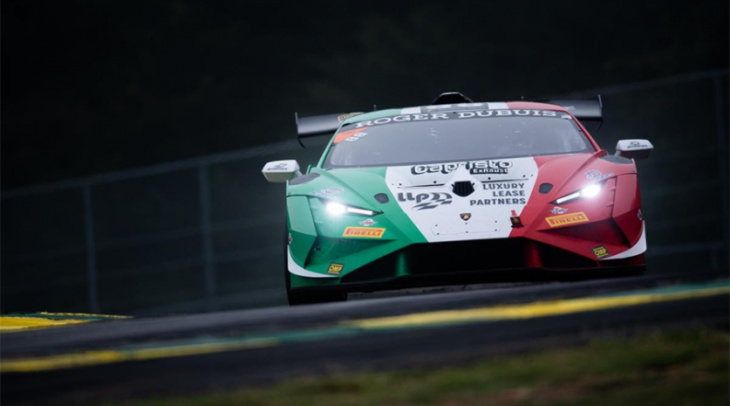 ALTON, Va. – Loris Spinelli and Giano Taurino are as hot in Lamborghini Super Trofeo North America competition as the weather was Saturday at VIRginia International Raceway.

The blazing heat didn’t matter as the duo rolled to their third straight win and edged closer to the top of the Pro class standings.

Driving the No. 88 Taurino Racing by D Motorsports, Lamborghini Palm Beach Lamborghini Huracán Super Trofeo Evo2, they combined to take the overall and Pro class victory by more than eight seconds in the first of two weekend races at VIR.

Spinelli started from the pole and avoided chaos directly behind when the Huracáns of second-place starter Danny Formal and third-place starter Dario Capitanio touched entering Turn 1 of the 3.27-mile, 17-turn road course. The result was damage eliminating Capitanio and the No. 27 Dream Racing Motorsport, Lamborghini Las Vegas Huracán, while Formal dropped to 18th place in the 25-car field.

Unaffected, Spinelli pulled to a 12-second lead before handing the No. 88 Huracán over to Taurino on the mandatory pit stop. All Taurino needed to do from that point was not make a mistake.

“After the incident happened at the front with those two, it gave us a big cushion to rely on,” Taurino said. “I went out there with no stress. For the first time, my heart wasn’t going crazy. It’s very hot out there so the track is very loose, like on ice, so I had to make sure I didn’t spin out. Overall, I think we did really good.”

Formal and co-driver Kyle Marcelli charged back in the No. 1 Prestige Performance with Wayne Taylor Racing, Lamborghini Paramus Huracán to finish third, behind Edoardo Piscopo and Patrick Kujala in the No. 50 O’Gara Motorsport/Change Racing/US RaceTronics, Lamborghini Beverly Hills Huracán.

Formal, Marcelli and the No. 1 still hold a comfortable lead in the Pro standings heading into Sunday’s second race, the 10th of 12 this season. Spinelli, Taurino and the No. 88 moved into second in the class, 25 points out of the lead and a single point ahead of Piscopo, Kujala and the No. 50.

“Right now, we are in a good way,” he said. “Three (wins) in a row is amazing. We are working really hard, especially with Giano. He did an amazing pace today and the car was really good, so thanks to the team.”

The ProAm class witnessed a dominant performance of its own, with Bryson Lew and John Dubets collecting their third straight win and fifth this season in the No. 46 Precision Performance Motorsports, Lamborghini Palm Beach Huracán, by a 24-second margin over teammates Sebastian Carazo and Bryan Ortiz in the No. 47 PPM Huracán.

Starting ninth overall, Lew dodged the first-lap melee and came out in third place. He was fourth overall and in the ProAm lead when he stepped out in favor of Dubets to close.

With the win, Lew and Dubets also reclaimed the ProAm points lead.

Shehan Chandrasoma, solo driver of the No. 19 MCR racing, Lamborghini Austin Huracán, drove to his fourth Am win in 2022. Also starting from the class pole, Chandrasoma was never seriously challenged and crossed the finish line 48 seconds ahead of David Staab and Nikko Reger (No. 48 Precision Performance Motorsports, Lamborghini Palm Beach Huracán), who saw their Am lead chiseled to six points.

“Consistent car, good team, they set up the car perfectly,” Chandrasoma said. “I closed the championship lead by a couple points but hopefully things go even better next race.”

The wildest finish of the day came in LB Cup. Ofir Levy (No. 13 O’Gara Motorsport/Change Racing/US RaceTronics, Lamborghini Rancho Mirage Huracán) held off advances from several challengers in the closing laps of the 50-minute race, including a drag race down the front straight to win by 0.604 seconds over Austin McIntosh, making his series debut in the No. 49 Precision Performance Motorsports, Lamborghini Palm Beach Huracán.

“I just tried to be smart, not to block anyone but just play defensive,” Levy said. “The guys behind were a little quicker at certain parts, and there were a couple moves they attempted but I was able to hold on. It’s a fantastic win.”