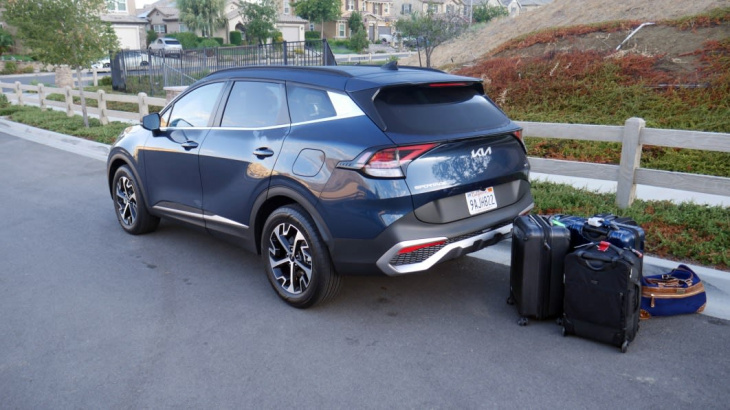 The specs say that the completely redesigned 2023 Kia Sportage should have best-in-class cargo space behind its back seat at 39.6 cubic-feet*. That surpasses the previous leader in the clubhouse, the mechanically related Hyundai Tucson. This is quite a change for the Sportage, which used to be one of the smallest compact SUVs. In fact, there was very little difference between the last-generation and the one-size/class-down Kia Seltos.

Now, there are different versions of the Sportage, which is where that asterisk comes into play. The Sportage Hybrid has 39.5 cubic-feet of space behind its raised second row. That’s right, 0.1 cubic-foot. Whooptidoo. The Sportage Plug-in Hybrid has only 34.5 cubic-feet, the result of it not having the dual-level floor of the other versions. It also lacks a spare tire.

This luggage test was conducted on the quite excellent Sportage Hybrid. 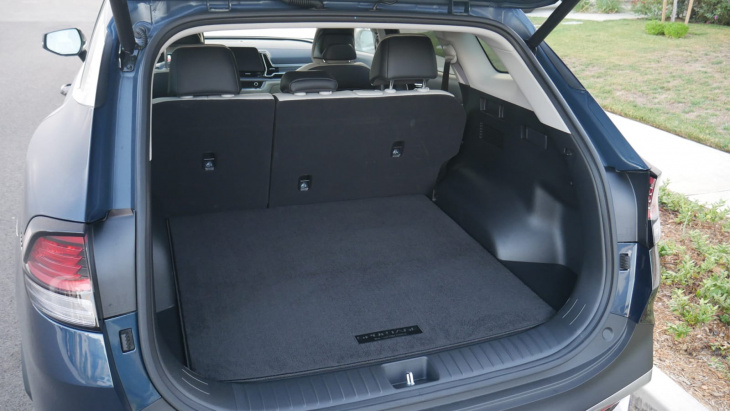 Here’s the cargo area. It’s as big as advertised with abundant length and width, plus a decent amount of height beyond the back seat line. 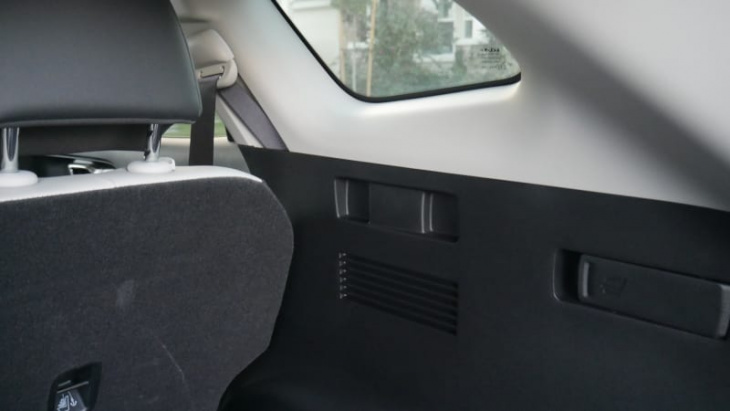 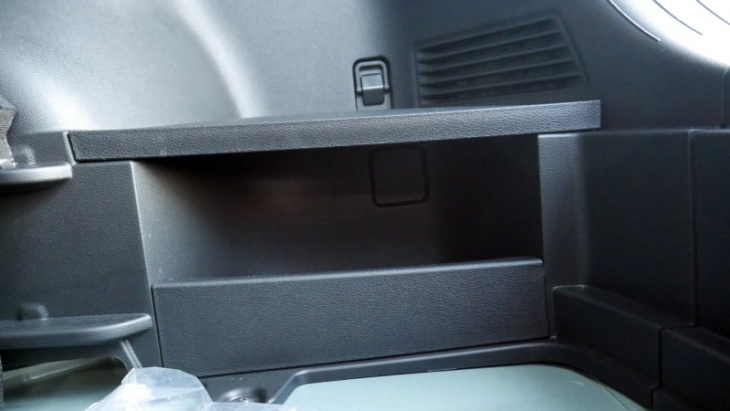 The Sportage can be equipped with a cargo cover, which was not included in this test car. However, like the Hyundai Tucson and Toyota RAV4, you can store the cargo cover inside the car. You can see the little indentation that keeps it in place above right.

You can also see the difference in height between the low and high floor settings. Using the low floor lets you take full advantage of the 39.6/39.5 cubic-feet of space. Using the high-floor provides a flat load floor when you fold down the back seat. Its resulting 34.5 cubic-feet is still better than most compact SUVs.

Which is good, because I must now admit to screwing up this test a bit. Normally, I test only with the lower floor position since we’re talking max space behind the back seat. A flat load floor with that seat lowered is therefore irrelevant. Unfortunately, I totally missed the lower floor option when I did this test and only stacked bags atop the high floor. Oops.

Did it really matter? Ah, no. 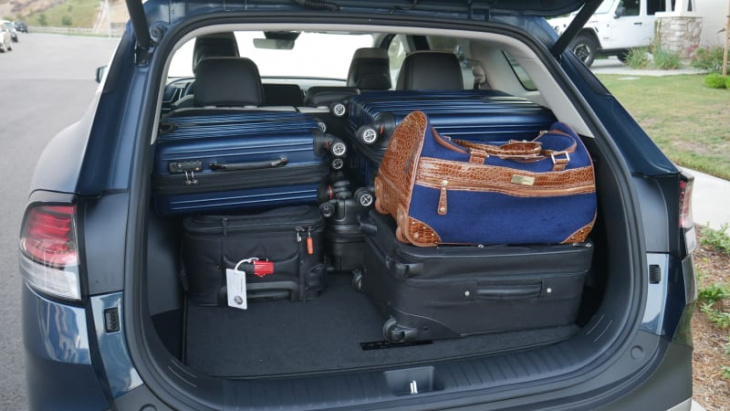 All the bags fit, no problem whatsoever. Easy cheese.

As in every luggage test I do, that means two midsize roller suitcases that would need to be checked in at the airport (26 inches long, 16 wide, 11 deep), two roll-aboard suitcases that just barely fit in the overhead (24L x 15W x 10D), and one smaller roll-aboard that fits easily (23L x 15W x 10D). I also include my wife’s fancy overnight bag just to spruce things up a bit (21L x 12W x 12D).

You can see that the Sportage is notably longer than its competitors, with the Tucson being the closest (I remembered to use the lower floor in that). 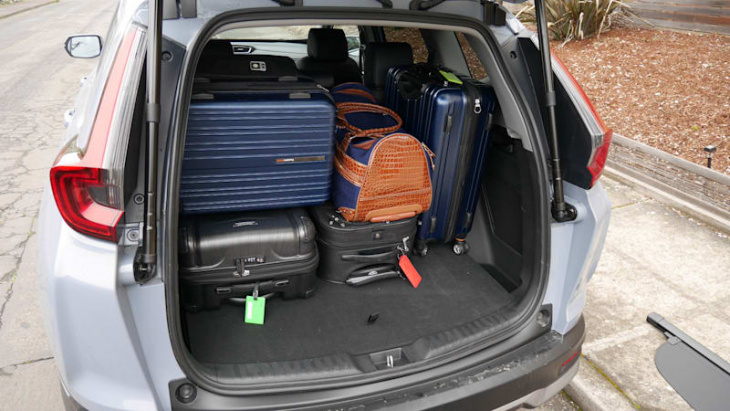 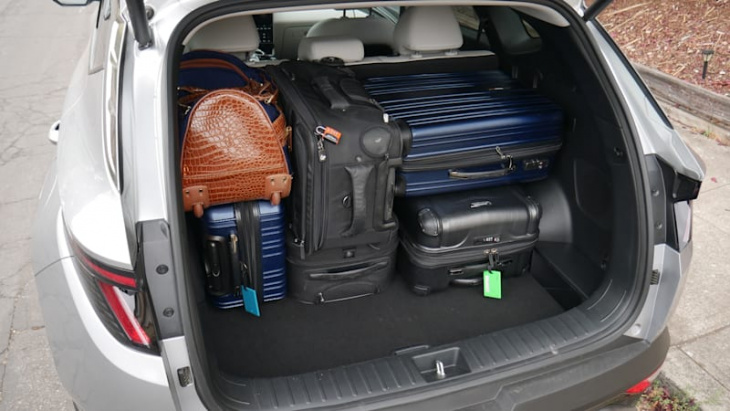 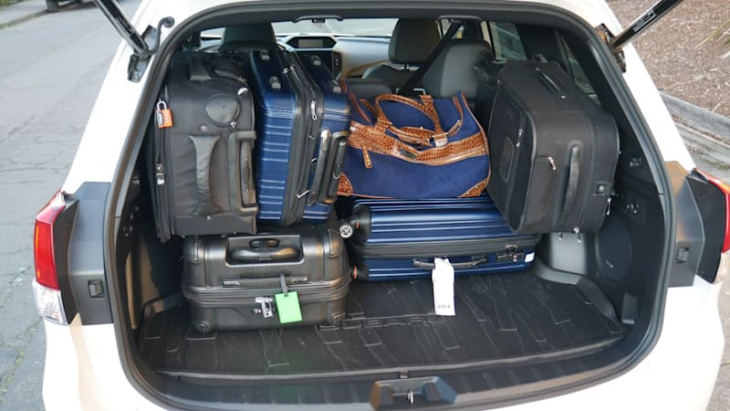 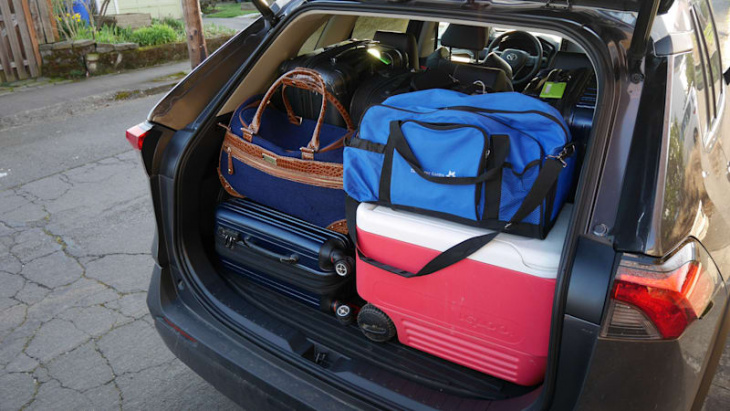 Judging by the photos, the Sportage doesn’t seem as large as the CR-V and it sure looks to be the same as the Tucson. Too close to call? You’ll note that the Forester cargo area isn’t as tall as those of its competitors, but with some more effort, takes advantage of its boxiness to fit the same items with comparable space left over.

As for the RAV4, I annoyingly did not take a photo with all the standard bags inside without the cargo cover in place. I did, however, take a maximum image featuring a 38-quart Coleman cooler and a blue duffle bag. Those exact same items fit in all the vehicles above, with the Tucson having the most left over afterward.

The Sportage? Sorry, I don’t know. That cooler is currently located somewhere in my new, box-filled-garage that resembles the warehouse at the end of Raiders of the Lost Ark. The blue bag? Ditto. My guess? As the above photo of the remaining space seems to attest, they’d fit without issue. 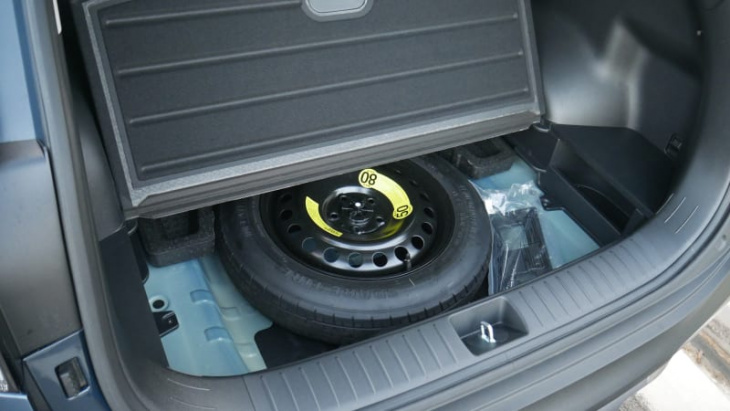 At the very least, keep in mind that the CR-V Hybrid and Tucson Hybrid do not have spare tires. The Sportage Hybrid and RAV4 Hybrid do. This is a big advantage as far as I’m concerned. It’s also important to note that the Sportage Plug-in Hybrid does not have the spare due to all those extra batteries.

Because of that, I feel confident in saying that it is in fact the best in the segment. While the space seems similar to the Tucson, the Hybrid/spare tire issue tips the scales in the Kia’s court. The Honda CR-V is also redesigned for 2023, though is apparently on-par with the outgoing version shown above. To be continued …