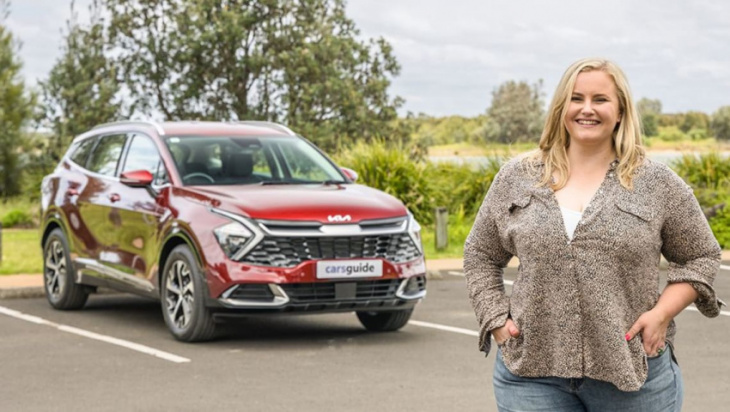 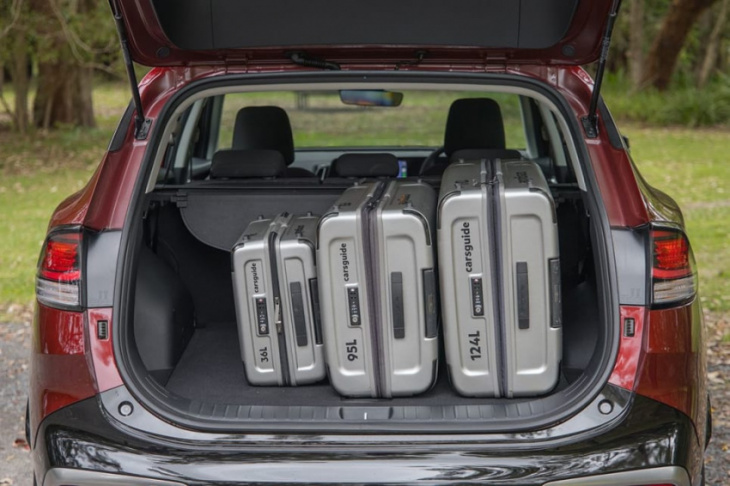 The boot has lots of room with its 543L (VDA) capacity when all seats are in use. (Image: Glen Sullivan) 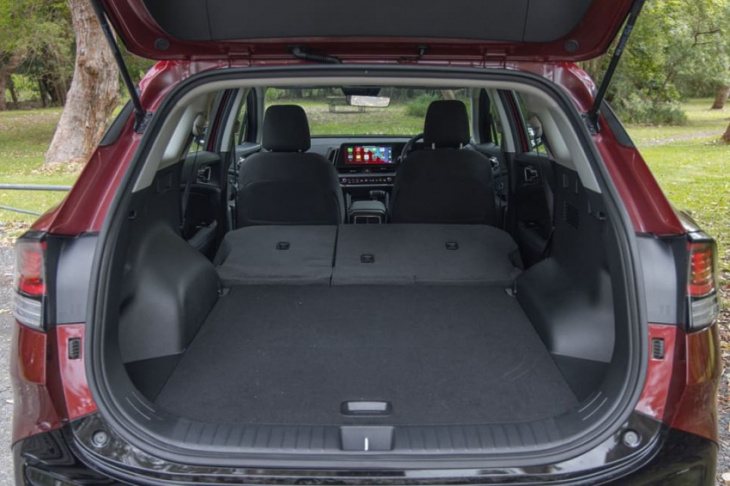 When the back seat is folded, boot capacity increases to 1829L (VDA). (Image: Glen Sullivan)

After driving it for a week with my family of three, it’s easy to see why the newly facelifted Kia Sportage SX petrol is a serious competitor for the medium SUV market.

The biggest pull factor is a price tag that should make even a budget conscious individual excited. However, it’s restyle has pushed it from being ‘just okay’ in the looks department to downright stylish.

Add the practicality of a spacious cabin and, while it might not take the win, it certainly gets on the podium.

There’s no denying the new-generation model’s redesign has done the Sportage a lot of favours. It has awesome kerb-side appeal now with its pronounced black grille and the cool LED arrowed lights that cut into it.

Those interested in the EV 6 will see some nods to the electric car in the rear styling, with the swoopy, smoothed rear that blows out over the wheels. The overall effect makes this feel very fresh and relevant.

The interior isn’t forgotten, either, with the dashboard being headlined by a gorgeously curved panoramic display that houses your multimedia system and instrument panel. 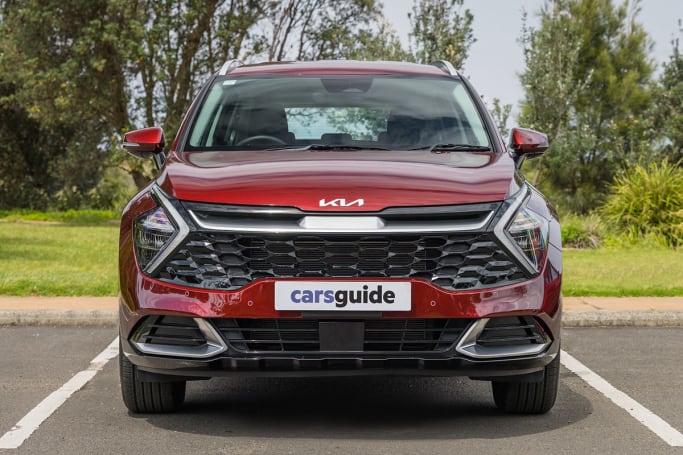 Despite the traditional gear shifter, key ignition (no push-button start on this grade) and lever-like door handles, which could have made it look a bit naff, they just make the Sportage seem more solid.

This doesn’t look or feel like a base package. 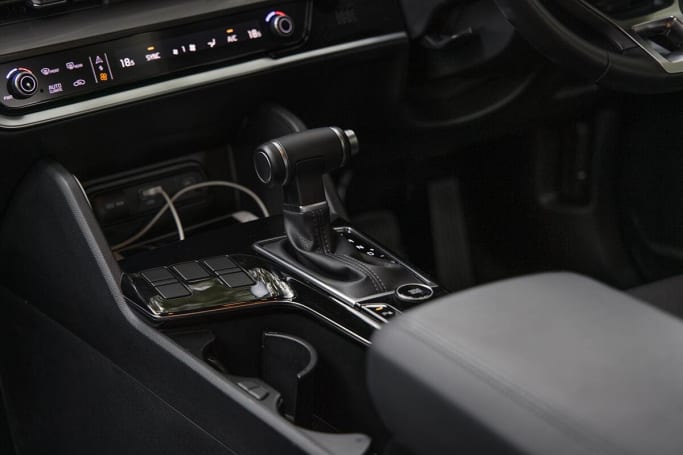 How does it drive?

The front-wheel drive, 2.0-litre four-cylinder petrol drivetrain can feel almost reluctant to stretch its legs – much like a sun-drunk horse that just wants to laze in a paddock.

The power feels inconsistent. At lower speeds, you feel like this is almost zippy but put your foot down to get up a hill and it will start to whine at you. It gets up there, no issue, it just doesn’t sound happy about it.

The six-speed auto transmission is quite smooth but the ride can get bumpy, even on the open road. It’s not enough that you’re uncomfortable but you’re aware of what sort of road you’re on. 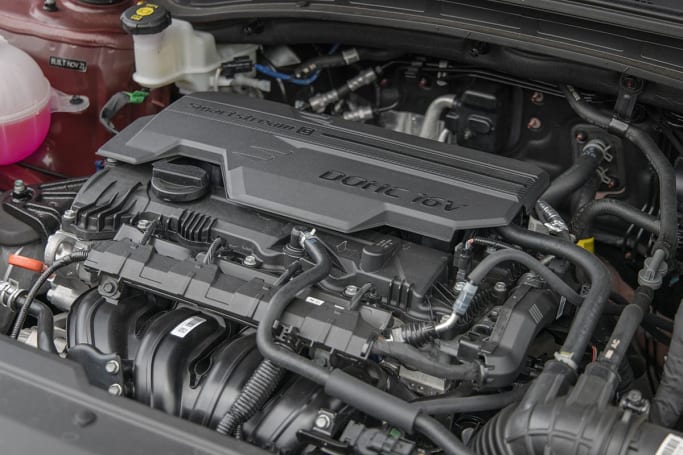 Under the bonnet is a 2.0-litre four-cylinder petrol drivetrain. (Image: Glen Sullivan)

The steering on the Sportage is direct and feels precise when you’re winding through a tight street. The cabin is mostly quiet but you do get some wind noise at higher speeds.

Kia has made the reversing light on the Sportage very small and positioned too low. Blink and you’ll miss it, which sort of defeats its purpose in my mind.

The smaller size makes it a true friend in a car park and you’ll fit into a spot, no worries. The reversing camera is clear and the front sensors feel accurate. So, overall – it’s easy to handle. 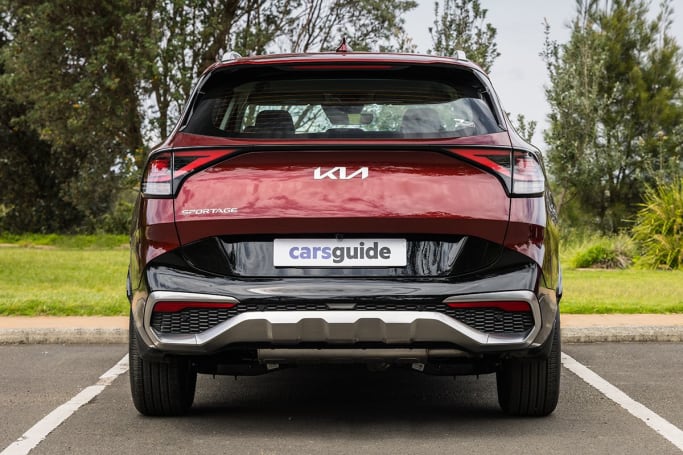 The smaller size makes it a true friend in a car park. (Image: Glen Sullivan)

How spacious is it?

My favourite thing about the car is the SPACE. Each occupant will benefit from generous legroom and headroom – which is not always the case in this size of SUV.

The storage up front is good, despite there being only a shallow glove box and middle console, because of the other spaces, like: the storage bins in each door, a large centre console with retractable cupholders and a great-sized cubby at the front of the gear shifter.

I also like the handy storage pockets in the door grips. The back doesn’t get quite so much but there’s enough to satisfy the odd device. 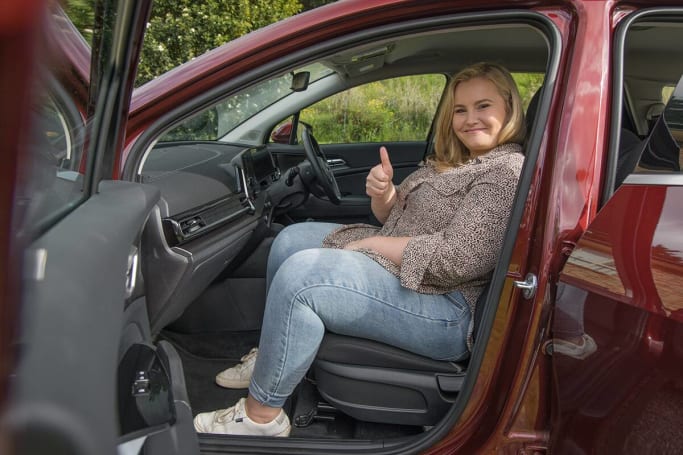 Each occupant will benefit from generous legroom and headroom. (Image: Glen Sullivan)

The boot has lots of room with its 543L (VDA) capacity when all seats are in use, but that jumps up considerably when the back seat is folded (1829L VDA, to be exact).

The level load space also makes it easy to slide bigger items in and out. There are some cute storage cubbies on either side of the cargo floor for small items, too.

The boot has lots of room with its 543L (VDA) capacity when all seats are in use. (Image: Glen Sullivan)

When the back seat is folded, boot capacity increases to 1829L (VDA). (Image: Glen Sullivan)

How easy is it to use every day?

Easy peasy, lemon squeezy. Lame, I know, but no less true. Yes, the tech could be a little bit better, but otherwise, it’s a nice car to handle.

All the seats are firm but comfortable. At this low grade, the front seats are not electrically-controlled but surprisingly the driver’s side still sports an electric lumbar support (awesome for longer trips).

Fabric will never be my favourite choice as I prefer something hardier with kids around, but the texture and colour of the seats is nice. 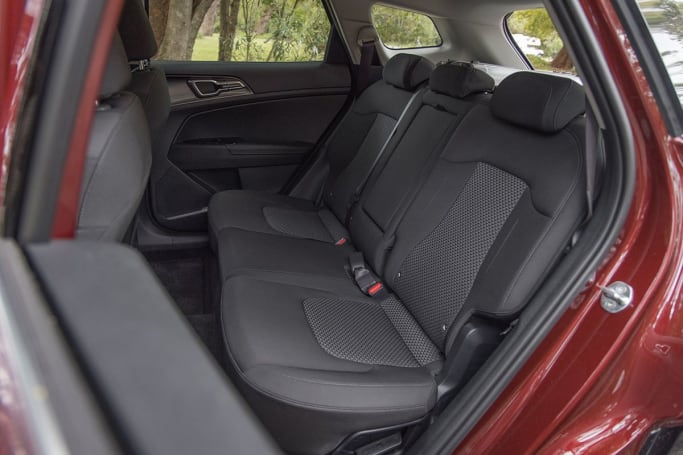 All the seats are firm but comfortable. (Image: Glen Sullivan)

Unfortunately, there are no hardened kickplates on the backs of the front seats, so there may be regular maintenance cleaning to keep them looking good.

The squared-off door apertures and lower profile height of the car mean its easy to get in and out of, which is something my five-year old always likes. The taller window sills did mean my son didn’t get an awesome view this week, though.

There’s no powered tailgate on this grade and the boot lid does have some heft, but there’s a chunky handle to help you close it, so it’s not too much trouble. 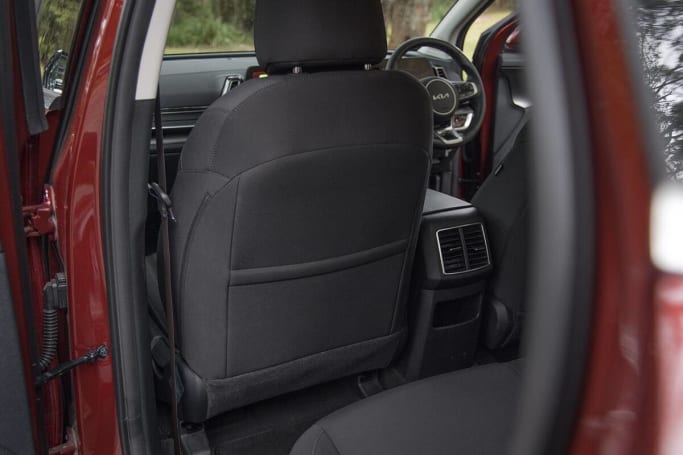 Unfortunately, there are no hardened kickplates on the backs of the front seats. (Image: Glen Sullivan)

How safe is it?

The Sportage hosts some great safety features that I always like to see on a family SUV, like AEB (with car, pedestrian, cyclist and junction detection), plus rear cross-traffic alert. As well as front and rear parking sensors plus a reversing camera that’s nice and clear.

It has the usual airbags (seven, in total) but it also has the newer front centre airbag, which is nice to see. 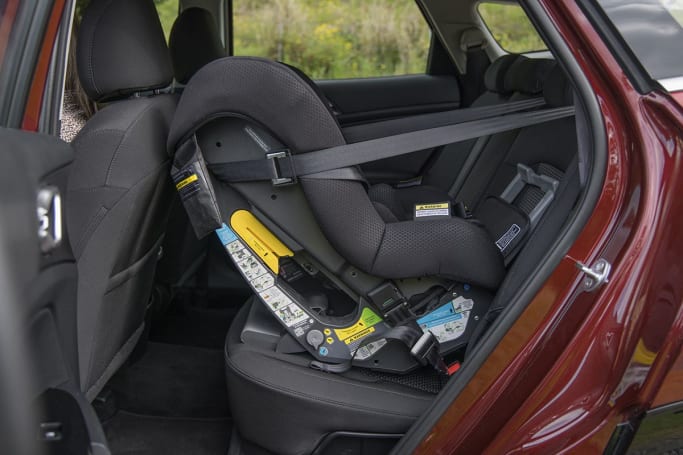 It’s also managed to score a maximum five-star ANCAP safety rating from the strict 2022 testing criteria. But, curiously, the overseas model was tested, which has a different wheelbase and smaller body than our Aussie version. I’m not sure how I feel about that, but it might not bother you.

There are ISOFIX mounts on the outboard rear seats and three top tether child seat mounts. With the right car seats, you should be able to fit three seats side-by-side. There’s also enough space to fit a 0-4 rearward facing child seat without compromising front passenger comfort. 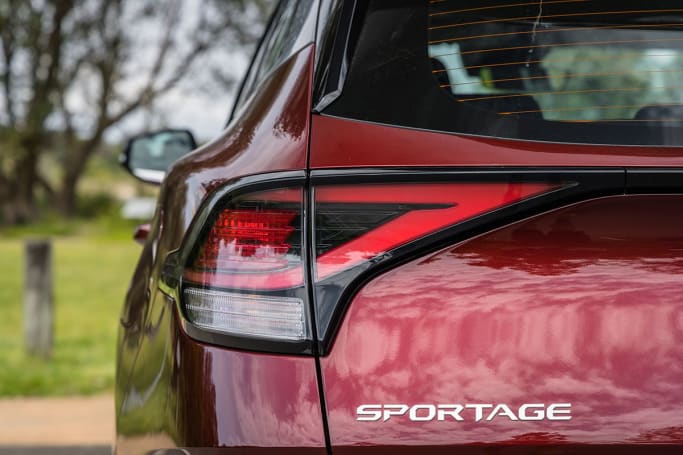 Considering this is one of the base models, the tech is surprisingly well-rounded, but not perfect. The touchscreen multimedia system and digital instrument panel (which are both 12.3-inch) look fabulous.

The touchscreen is a bit laggy, and the Bluetooth has to be rejiggled at times, but otherwise both are simple enough to operate. 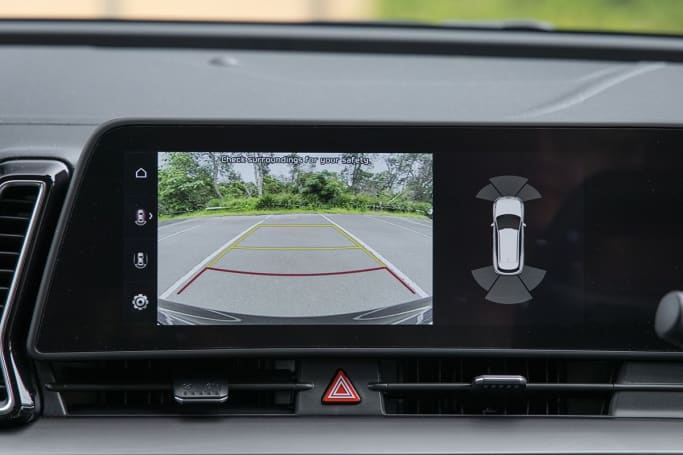 The tech is surprisingly well-rounded, but not perfect. (Image: Glen Sullivan)

The wired Apple CarPlay and Android Auto are welcome but this does come with built-in satellite navigation, too.

However, there are only two USB ports in the whole vehicle (one USB-A and one USB-C, both up front), which is a downer for other passengers who want to stay charged up (or for keeping a kid’s device primed for long car trips!). 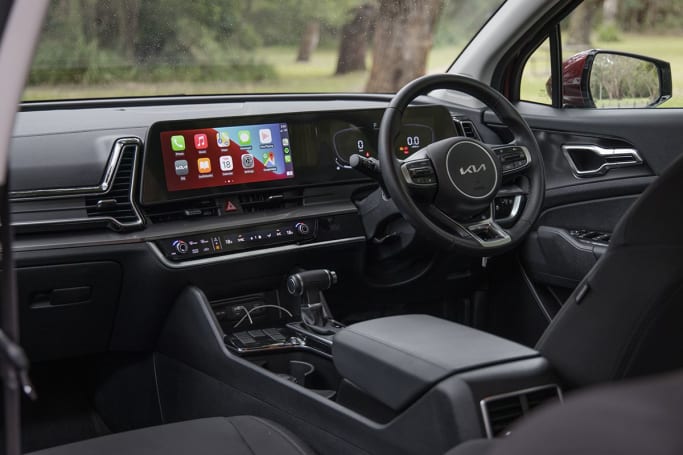 How much does it cost to own?

The SX Petrol, which sits closer to the bottom than the top of the queue, will cost you just $37,000, before on-road costs, and you can have it with a manual gearbox for two grand less!

If you’re considering a medium SUV like this, then it represents reasonable value-for-money because not only does it fall under $42K drive-away – which makes it a serious competitor against the likes of the Toyota RAV4 and Volkswagen Tiguan – but it also has Kia’s attractive seven-year/unlimited warranty and seven-year capped-priced servicing plan. 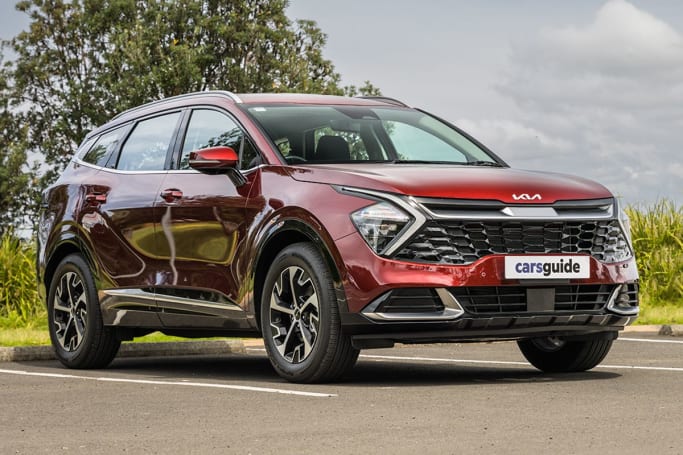 Services average $497 annually over five years, which is on the more expensive side for the class but servicing intervals are reasonable at every 12 months or 15,000 kays, whichever occurs first.

The official combined fuel cycle figure is 8.1L/100km, and after some heavy open-road driving with urban stuff as well , I achieved 7.7L/100km.

Given its size and that I drove it hard this week, I’m impressed with the fuel economy. I would obviously expect that figure to be higher in the city, but it’s not too shabby at all. 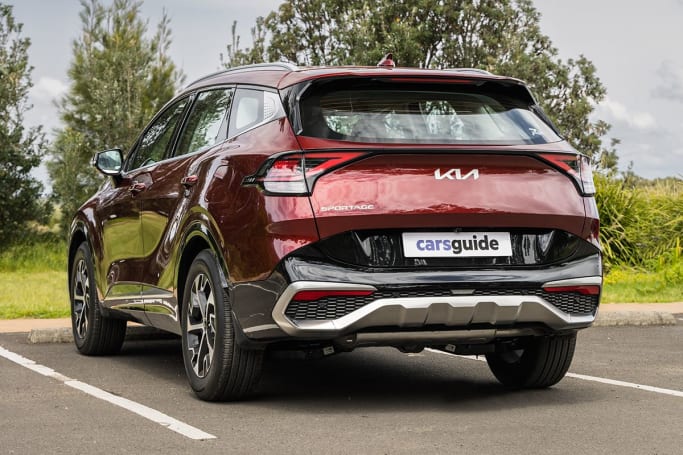