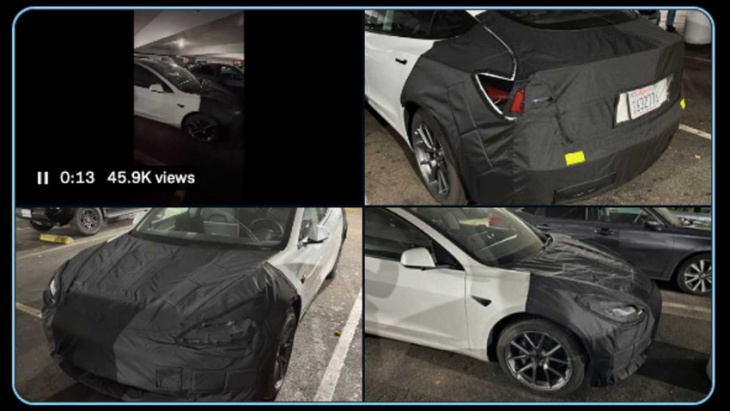 We recently wrote about a report claiming that Tesla was working on a refreshed and improved version of the Model 3 known as project “Highland,” and it looks like that information may have been accurate. Photos were posted on Twitter showing what is very likely a prototype or mule for the upcoming Model 3 facelift, as it had camouflage hiding much of its front and rear sections, and it was also wearing manufacturer plates.

Twitter user omg_Tesla/Rivian spotted the prototype in a parking lot in Santa Cruz, California, and took several photos that even through the camo reveal some of the changes that Tesla will make. For instance, you can see that the upper corner of the headlight appears to have a camera, which the current model doesn’t have – if it is a camera, it’s probably there to eliminate a blind spot and possibly also improve the vehicle’s ability to “see” while self-driving.

And considering how much of the front end is hidden under camo, we say it’s also hiding a new front bumper design, and maybe even a different style of hood (otherwise they would not have gone to the trouble of camouflaging it all the way up to the windscreen). The front fenders probably won’t change much (if at all) so even if the headlights themselves may be different, as well as the bumper, they will still work with the exact same fenders as currently fitted to all Model 3s.

The rear end is also heavily camouflaged, with just the light clusters’ side reflectors and a bit of the LED blade peeking through the camo – the taillights themselves don’t appear to be any different, though, so maybe Tesla will keep the old design or this mule/prototype doesn’t have them. And just like in the front, the entire bumper is hidden, as is the trunk lid, strongly suggesting that these will be redesigned for the refreshed version of the model.

We’ve seen various comments from people who don’t seem convinced this is an actual Tesla prototype, but between the high quality, tailored camo (like all other manufacturers have been using for years) and the manufacturer plates, as well as the possible cameras in the headlight housing we’re pretty sure this is the real deal.

Then again, it could just be a simple Tesla owner who really wants to protect their vehicle from the harshness of winter in California… even when reversing.

Keyword: Is This The Tesla Model 3 Refresh With Its Front And Rear Under Camouflage?