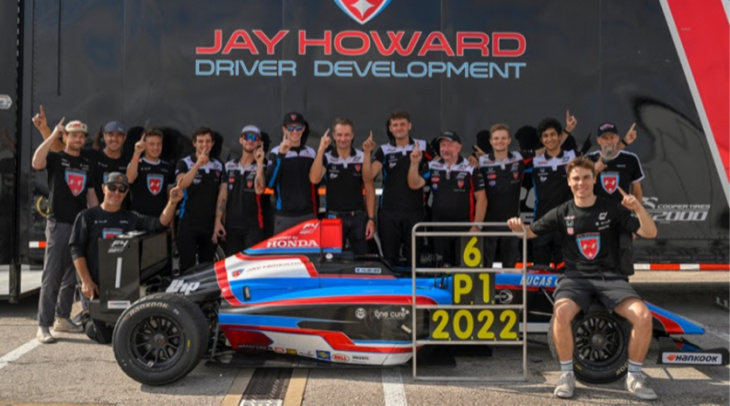 “It’s been incredible,” said Hughes of his season. “Winning a championship is what you dream of. We couldn’t have won it in any better style than winning the last two races, and that’s all thanks to the team. When I came over [to America] this season, I knew no one. The team welcomed me like family, and for us to win this championship—I can’t thank them enough. It’s been a great year.”

“It’s been a pleasure working with Lochie,” said Jay Howard, Owner of Jay Howard Driver Development. “I couldn’t ask any more from him. He was all-in. His parents aren’t here; he lives by himself. He’s dedicated and it shows every time he goes on track. I really appreciate all the hard work from the whole team this year; it really was a team effort. Lochie’s a well-deserved champion.”

Moving from his native country of Australia to America, Hughes was tagged by Jay Howard Driver Development to compete in the 2022 F-4 U.S. season.

After being out of the car for two years during the COVID-19 pandemic, Hughes was announced as one of the JHDD drivers just days before 2022 season began. In his debut season racing in America, Hughes led the F-4 U.S. field with six wins, and tied championship rival Bryson Morris for the most podium finishes of the year with 10 podiums.

As the champion, Hughes has secured a scholarship to compete in the 2023 FR Americas season. Valued at $215,000, the prize package includes an engine lease from Honda Performance Development, a chassis lease from Ligier Automotive, tires from Hankook Motorsports for all official sessions, entry fees and a marketing package from Parella Motorsports Holdings, as well as $25,000 from HPD.

The Australian also earned 12 FIA Super License Points to assist in his journey on the Road to F-1.