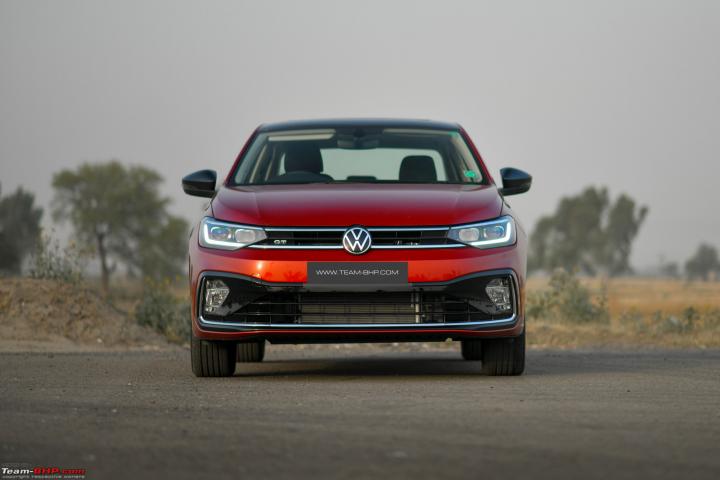 BHPian Newtown had shared the following dilemma with other enthusiasts before:

Folks – I write this to seek your advice.

My father who is 78, is an avid driver. A week before the lockdown in March 2020, he bought a 2020 Honda City top of the line ZX CVT. The car is now at 5,500 kms only and in showroom condition save a little mark on the rear bumper.

He has been wanting a Taigun ever since its launch. However this was not considered seriously as the differential of price (selling the City and buying the Taigun new) would make no economic sense.

The opportunity has now presented itself where the owner of a Dec 2021 VW Taigun 1.0 Comfortline Automatic wants to sell their 1,500 km driven car. I will be going with my father to see the car today.

Personally I think it is unwise to sell a top of the line Honda City that is almost brand new and get a Taigun with lesser creature comforts. I feel the loss of 4 air bags, no LEDs at all, no start stop, no auto lighting are some of the biggest misses of the Comfortline.

Although I am trying to talk him out of it he is very excited to have a higher and a slightly larger car that is easier to get in and out of.

Request your points of view and if this makes any sense at all. Cars at our home have been more heart than head always but this change seems a little too much for me to digest.

Thanks for your thoughts in advance.

BHPian Newtown had the following update to share on the matter:

Hello T-BHP family. I’d like to update all of you on what transpired in the months following the last posts on this thread.

Through the months of May, June & July, I made my best effort to get the City sold. Eventually I had to accept reality that the market was not willing to pay top moolah for a 4th generation City despite it having less than 6,000 km on the odometer.

While it did not take that long to gauge what price the car would fetch, what did take longer was arriving at a decision on the car to replace it.  My dad has always been a sedan person and has never liked the SUV and off roader shapes. Which is why I was flummoxed when he had said he like the Taigun and wants it so that he does not have to sit into a car too low.

Over the months that went by, I figured out that it was the Digital Dash and the Infotainment Screen that he was really after. He is quite a gadget freak even at this age and take a lot of interest and effort in learning something new.

I also felt that my dad was left a little disappointed by the Honda City’s Infotainment display quality and graphics. Even though one could project their Android auto to the screen, the quality was pedestrian. He loves maps (his career involved a lot of maps) and over the years I have often seen him just sitting with them on a crisp screen. Most often that is what he does with his iPad.

Just to make things more complex, he started test driving a multitude of cars – Sonet, Venue, went for the Grand Vitara launch, also drove the Brezza. Somehow none of them caught his fancy.

Late July, we happened to be at the VW Showroom to pick up a document while passing by. The Taigun and Virtus were both on the display floor. So decided to adjust the height of the seat of both cars and see how easy/hard ingress and egress was.

What we realized was that Virtus driver seat could be adjusted to a position that would be easier on the knees to get in and out off. Despite the seat being adjusted to a tall height, it did not impede head room. To add, the passenger seat of the Virtus also came with height adjustment which would really help my mum as well.

Not long after the visit to the showroom, my parents were very happy to welcome home, a Virtus 1.0 Topline in Cherry Red. It has been an interesting 5 – 6 weeks with the car and needless to say my parents are enjoying it! I wish to thank all of you that put your thoughts on this thread in different ways. Some of those struck a chord and enabled this change.

Here’s what BHPian Cyborg had to say on the matter:

Congratulations on the Virtus! So, so happy to read this, God bless your parents and may they be happy and healthy always.

Please keep in mind, you will never walk this way again. Considering the age of your Father (parents), please indulge in his/their whims and fancies as long as you can. Their happiness is all that’s important, cars or anything else can come and go. The smile you put on their faces and happiness you give them is priceless!

We can never give them what they have given us in every which way but if you can make them feel in their hearts that their Son is doing everything for their happiness, you have succeeded in your life.

Keyword: How my 78 year old father replaced his 2020 Honda City with a VW Virtus