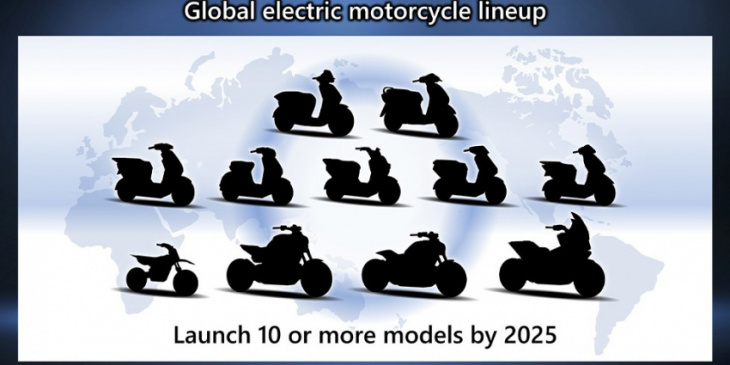 Honda plans to introduce at least ten electric two-wheeler models worldwide by 2025. This includes electric motorcycles, mopeds and electric bicycles – but no pedelecs. Further details were also announced regarding the technology.

Honda’s motorbike division wants to equip all its electric two-wheelers with solid-state batteries and is also pushing ahead with battery replacement. For battery swapping in Europe, Honda is a co-founder of the Swappable Batteries Motorcycle Consortium (SBMC). In Japan, Honda, the three other large Japanese motorbike manufacturers Yamaha, Kawasaki and Suzuki have joined forces with the mineral oil company Eneos to develop a battery exchange standard within the framework of the joint venture Gachaco.

Initially, this involves the so-called “Honda e: Business Bike series”. These electric motorbikes for commercial use are already being used by the Japan Post and Vietnam Post Corporation, for example, and the Benly e: model is due to be launched in Thailand at the end of September. Between 2024 and 2025, two electric motorbikes “for personal use”, namely private customers, are to be launched on the market. The latter could have an exchangeable battery, but possibly also a permanently installed battery.

In addition, three electric motorcycles in the “fun” category are also in development, Honda writes. These are said to be unspecified, larger motorbikes that are to be launched in Japan, the USA and Europe. However, it is not known which motorbike categories these fun vehicles will be assigned to.

As far as the technology is concerned, Honda wants to develop a special EV platform that includes the battery, power electronics and the e-motor. This drive platform is to be combined according to the “Monozukuri” principle (i.e. the art of making things) with a frame that is selected according to regional preferences or the requirements of the product.

Within the next five years, annual sales of these models are to be increased to one million units and, from 2030, to 3.5 million units. The development of a networked platform is also intended to help with this, so that thanks to digital functions, the networked motorbikes should become more attractive to customers.


View more: How is the Honda Amaze performance?