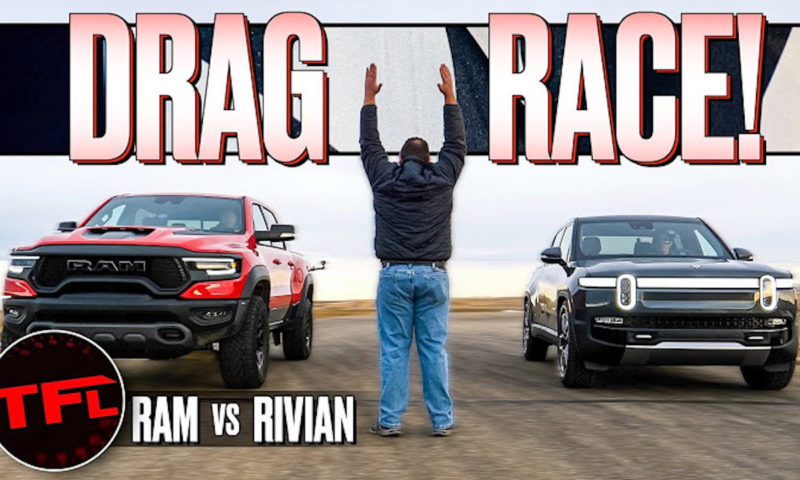 Remember your uncle’s 1985 Toyota Hilux? The one that could do 140 km/h downhill and if you ran out of diesel, some cooking oil would likely suffice? Oh how bakkies have come such a very long way, with their breadth of talents now being so varied and the aplomb with which they can do things, like act as a daily runabout, enough to baffle.

Some 37 years on, ‘bakkies’ are now the subject of YouTube drag races and while some ‘murcan manufacturers shoehorn bigger and bigger V8’s into their ‘pickups’, EV manufacturers launch cars with more preposterous power and torque outputs than we ever though possible from any vehicle, let alone a plush, comfortable and completely capable electric bakkie… As a side note, Rivian are American, but they’re different.

Since Rivian announced the R1T’s frankly absurd outputs, there’s been a certain drag race that everyone has been waiting for – RAM TRX vs Rivian R1T. With an immense 622 kW/1 231 N.m from its four permanent-magnet motors, each one mounted inboard at a wheel, its  0-100 km/h is 3,0 seconds dead and it’ll surge on to a top speed of 200 km/h, yet boasts a range of just over 500 km,  if you don’t launch it at every opportunity.

Up until the R1T was announced, the undisputed king of ‘pickup’ performance was the RAM TRX with its 6,2-litre supercharged and intercooled pushrod, 16-valve Hemi V8 with port injection. One couldn’t really engineer anything to be more of an antithesis to the Rivian’s high-tech electric motors than this. If the R1T’s motors are fusion sushi, there TRX’s meaty V8 is a boiled potato. But wow, what a potato it is. 524 kW/881 N.m propel the enormous TRX to 100 km/h in under 5 seconds and if you’re brave enough, it’ll stop going faster just short of 200 km/h.

Have a look at this epic drag race from the team at The Fast Lane Truck in the US.

Car manufacturer Ford has delivered a near-£150million boost to the British car industry with plans to ramp up production of electric vehicle parts at its Halewood plant. The investment means that from 2024 the Merseyside factory will be making 420,000 electric power units – the motor and gearbox of the ...


View more: Ford in £150m boost for the British car industry: US-owned giant to ramp up production of electric vehicle parts at its Halewood plant

Photo / Supplied Thousands of eagle-eyed car enthusiasts have been left in stitches after German car manufacturer Volkswagen made a comical oversight on one of its social media pages. Those who spotted the hilarious gaffe eagerly shared their findings online this week where many speculated “how did marketing miss ...