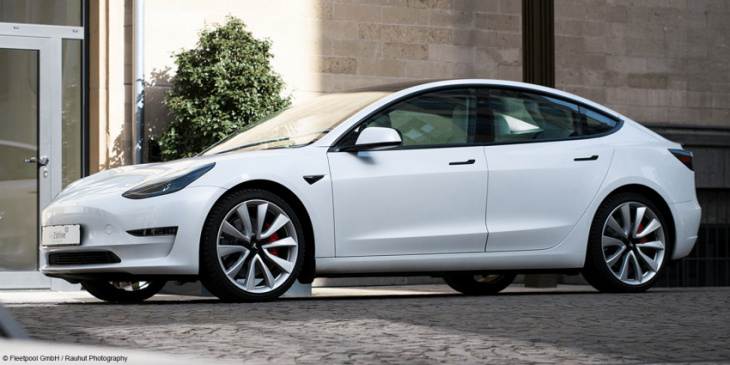 Tesla has received its largest known order to date from a US federal or state government agency. The California Department of Transportation (Caltrans) has ordered 399 Model 3s in the RWD variant from Tesla.

A spokesperson for the agency confirmed the order to Drive Tesla. Caltrans has already received 236 of the Tesla Model 3s and expects to deliver the remaining 163 by 1 January 2023. Since Tesla does not typically offer discounts to government agencies or large customers, the total order value is expected to add up to more than $18 million.

As the ministry spokesperson further indicated, the rear-wheel drive Model 3 will provide “the best overall value for taxpayers”. The procurement follows a comparison of several zero-emission vehicles approved by the Department of General Services for government fleet purchases. Criteria for the comparison include safety ratings, range, resale value and powertrain warranty.

When all 399 Model 3s have been delivered, 43 per cent of the ministry’s 1,195-vehicle passenger car fleet will be all-electric. Other electric cars include the Chevrolet Bolt, Nissan Leaf and also a Ford F-150 Lightning. In addition to these BEV models, Caltrans also has 37 Toyota Mirai fuel cell vehicles in its fleet.

In its spending plan for 2022-2023 and 2023-2024, Caltrans has budgeted $176 million each to replace its ageing internal combustion fleet with zero-emission vehicles, according to Drive Tesla. This budget will not only be used to procure the vehicles but also to build the necessary infrastructure.

The largest known order to date from a US government agency for Tesla was reportedly 250 Model 3s for the New York Department of Citywide Administrative Services (DCAS), although the procedure for this procurement had not yet been completed at the time and it is still unclear whether the deal was actually completed.