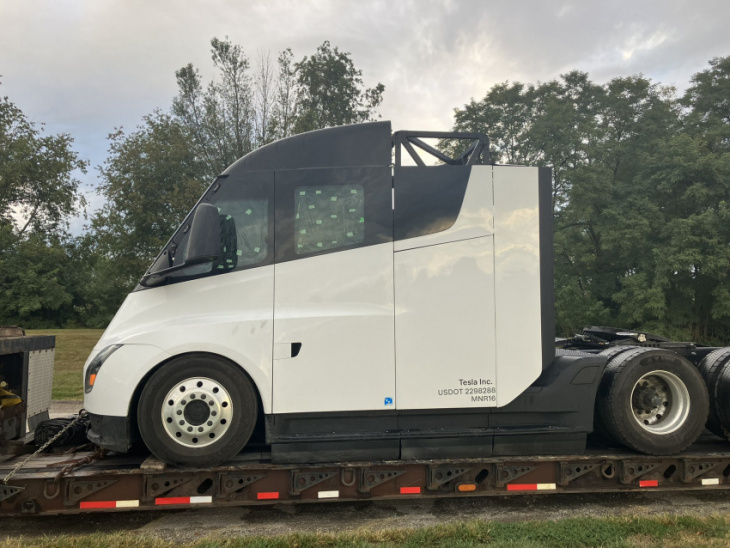 If Elon Musk’s statements ring true, the 500-mile variant of the Tesla Semi should start shipping later this year. As the EV maker approaches this target date, it appears that Tesla has been busying itself with stress-testing the Class 8 all-electric truck.

A recent sighting of the Tesla Semi as it was being transported in Louisville has caught the attention of many in the electric vehicle community. The vehicle itself looked like it was production ready as it reflected the truck’s updated design. But more importantly, the vehicle looked battle-scarred, almost like it was in an accident.

As pointed out by the Tesla Owners of Kentucky group, the Semi in the sighting seemed to have gone through a runaway ramp. This was hinted at by the fact that the front end of the truck was damaged and gravel is lodged in the vehicle’s headlights. Interestingly enough, the interior of the truck was completely covered by plastic, so its cabin was out of sight.

If Tesla was indeed testing the Semi through a runaway ramp, it would suggest that the electric vehicle maker is leaving no stone unturned to ensure that the Class 8 all-electric truck is as safe as possible. Runaway ramps, after all, are designed to help trucks stop safely, even if their brakes have been compromised.

Runaway ramps are typically long lanes that are filled with gravel or sand and connected to a steep downhill grade section of the main road. Runaway ramps have saved thousands over the years, and they are usually located in mountainous areas or sections of the road that tend to be hard on the brakes.

Considering that the Tesla Semi would have regenerative braking in its arsenal, the vehicle’s physical brakes would likely last for a very long time. As such, it would likely be very rare for a Tesla Semi to need a runaway ramp to stop safely. Tesla still deserves quite a bit of credit, at least for ensuring that its Class 8 truck can be stopped by solutions that are designed for traditional semitrailers.