Let’s talk pickups. More specifically, let’s talk about how reliable and capable the Honda Ridgeline is as a compact truck model. It’s a popular truck for many reasons, but the price tag can be more than some are willing to pay. The Honda Ridgeline is far more expensive than others in its segment and not beefy enough to compete with its full-size pickup competitors, like the Ford F-150 and Chevy Silverado 1500. So, if you’re on a tighter budget, and looking for a compact pickup alternative to the more expensive Honda Ridgeline, keep reading. The following trucks are capable and cost less than $30,000 to buy.

One of the first Honda Ridgeline alternatives to consider is the small-but-mighty Chevy Colorado. As Chevrolet points out, this 2022 model pickup has a starting MSRP of $25,200. Edmunds outlines its impressive specs, including the Colorado’s base, 2.5-liter, Inline 4 engine capable of harnessing 200 horsepower. Max towing comes in at 7,000 lbs, and max payload capacity ratings are at 1,435 lbs. The Colorado also offers the more traditional body-on-frame design, which differs from the Ridgeline’s unibody design. You also have more options with the Colorado, including a 3.6-liter V6 or 2.8-liter Duramax diesel, rear or four-wheel drive, and plenty of off-road trims. Consider serious off-pavement chops with the Z71, the Trail Boss Package, and the ZR2 Bison Edition.

Another compact pickup contender that deserves a test drive is the fun and sporty Ford Ranger. Ford says you can get a 2023 XL model with a starting MSRP of $26,400. Since Honda lists the 2023 Ridgeline with an MRSP of $38,800, the Ford Ranger could save you thousands! The Ranger’s 2.3-liter Inline 4 engine can achieve 270 horsepower, according to Edmunds. It’ll tow 7,500 lbs and has a payload capacity of 1,905 lbs. The Ranger is slightly bigger than the Ridgeline, with a wheelbase measuring 126.8 inches versus the Honda’s 125.2 inches. The Ranger is also 0.8 inches longer. 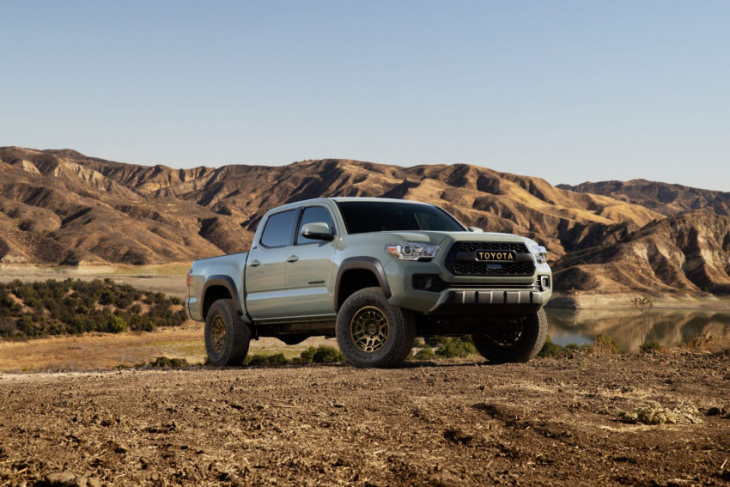 Toyota says you can get your hands on a 2023 Tacoma for $27,250, a few thousand less than the Honda Ridgeline. The Tacoma’s engine is a 2.7-liter Inline 4 with a horsepower rating of 159. Edmunds says it can tow up to 3,500 lbs and has a max payload of 1,685 lbs. The Tacoma is about 4 inches narrower than the Ridgeline and 0.4 inches shorter. However, the Tacoma is a better off-road partner with its more effective four-wheel drive system and higher ground clearance of 9.4 inches versus Ridgeline’s 7.6 inches.

The 2023 Nissan Frontier brings a more upscale experience to the compact truck segment and still comes with a less than $30,000 price tag. Nissan lists the starting MSRP at $29,190 for this “best-in-class horsepower” truck. You’ll appreciate the more robust engine, too. According to Edmunds‘ spec sheet, the Frontier comes with a 3.8-liter V6 capable of 310 horsepower. It’s rated with a 6,720-lb max towing capacity and a 1,600-lb max payload capacity. Both the Honda Ridgeline and Nissan Frontier come with basic safety, including auto emergency braking and five-star crash test ratings. However, you can spend a little less with the Frontier.

To recap, don’t discount the Honda Ridgeline as a capable, upscale pickup. It’s a top contender among industry critics and earns high marks from consumers in a big way. Still, if price matters and outfitting your dream Ridgeline leaves you clutching your pearls, there are more affordable contenders to consider. Check out these other four pickups before you make your decision, and your bank account will thank you.