The EV revolution is steadily coming along. There are many EV options in various segments of the market. To address range anxiety among drivers, EV automakers have steadily improved their driving range, but there are still a few with terrible range numbers. Here are the three EVs in the American car market with a standard driving range under 200 miles.

3. The Nissan Leaf is cheap but doesn’t have much range

The Nissan Leaf is one of the oldest EV options on the market, and it’s still an affordable and low-range EV option. According to Car and Driver, a 2023 Leaf starts at about $28,000 before incentives, making it the cheapest EV option right now. The Leaf’s affordability will come at a price, largely seen in its range numbers.

The standard Leaf has a 40-kWh battery that only allows it to get 149 miles of range. The standard Leaf also has a weak electric motor, only getting 147 hp. The good news is that Nissan has a more powerful, longer-range option.

The SV Plus trim costs about $37,000, but it improves the Leaf’s power output and range. The SV Plus trim gets 214 hp from its electric motor and is paired with a 62-kWh battery allowing the Leaf to get 226 miles of range. This makes it the only Leaf worth buying if shoppers want a daily driver.

2. The Mini Cooper Electric has a minuscule amount of range 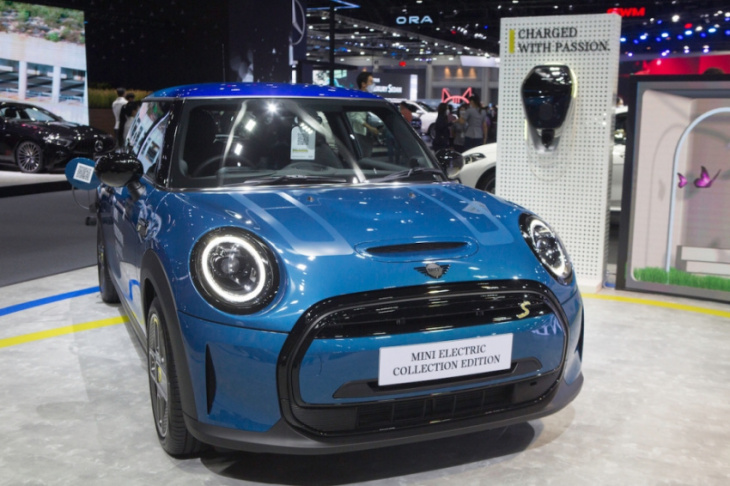 The Mini Cooper Electric is an electric version of the stylish Mini Cooper. It’s also a reasonably affordable EV option, starting at about $31,000 before incentives. The Cooper Electric has only one powertrain option, and its electric motor gets about 181 hp. This allows it to accelerate from 0 to 60 mph in 6.1 seconds, making the Mini a fun car to drive.

1. The Mazda MX-30 is only available in one state and has a terrible range

The Mazda MX-30 is Mazda’s first EV entry in the U.S. and has several problems. The most obvious issue is that the MX-30 mainly exists to comply with California’s regulations, and as a result, it’s currently only available in California. Mazda may eventually decide to sell the MX-30 in other states, but it’s not clear when that will happen.

It’s also not clear if car shoppers will even want the MX-30. It’s a compact crossover SUV, which makes it larger than the Cooper Electric or the Leaf. However, it also costs more, starting at about $35,000 before incentives. Not only that, but the MX-30 also has a worse range than the Leaf or the Cooper Electric.

Mazda gave the MX-30 one powertrain option, and its electric motor only generates 143 hp. It’s paired with a 35.5-kWh battery pack, and this only allows the Mazda EV to go 100 miles. Mazda does not currently offer any other battery option for this low-range EV.

EVR partners with EKA for commercial EVs in India

Vietnam’s electric vehicle maker VinFast said on Friday it had shipped its first batch of 999 cars to the United States, capping a five-year bid to develop an auto production hub in the Southeast Asian country for markets in North America and Europe. jQuery(function(){ if (typeof jwplayer_load == typeof indefined) { ...

British electric vehicle developer Arrival is reshuffling its leadership team. Denis Sverdlov is stepping down as CEO to become Chairman of the Board of Directors. The company has appointed Peter Cuneo as interim CEO, and there is yet another strategic change. Cuneo, who has resigned from the Board and ...

Solaris gives us an insight into its factory in Bolechowo near Poznan, where Poland’s leading e-bus maker recently inaugurated a bus charging park. Solaris equipped the massive charging hub with systems from three manufacturers that support bidirectional charging – a first in Poland. Solaris announced the 5,000-sqm Charging Park ...

Vinfast EV cars are seen during a car shipment to the US in Haiphong today. — Reuters HAI PHONG: Vietnam’s electric vehicle maker VinFast said today it had shipped its first batch of 999 cars to the United States, capping a five-year bid to develop an auto production hub ...

WeLion says it has produced the first semi-solid-state battery cell at its battery factory in Huzhou in East China’s Zhejiang province. The cells are to be used in Nio’s future 150 kWh pack. It is therefore hardly surprising that Nio’s Senior Vice President Zeng Shuxiang also attended the ceremony ...

Vietnamese electric car manufacturer VinFast has started exporting its electric cars. The first batch of 999 VF 8s was shipped to the USA, where they are to be delivered this year. The first VF 9s will then follow in early 2023 – in Vietnam, as well as internationally. After ...

The Chinese company Botree Cycling is planning to build a recycling plant for electric vehicle batteries and an education and training centre for battery recycling specialists in Guben, Brandenburg. Another industry player is also setting up shop in Guben. With its decision for the Brandenburg location, Botree Cycling is ...

SK to introduce fast chargers with integrated battery diagnosis in 2023

LG Chem to build cathode plant in the USA

Will Parts Be Available as Needed for Electric Vehicle Repairs?

How Long Will a Tesla Electric Vehicle Battery Last?

Poland partners with China to produce its first electric vehicle

What is Vehicle Excise Duty? The incoming road tax rules for electric vehicles

“Locked out of market:” Why Australia trails the world in electric vehicle uptake

Which Electric Vehicles Qualify for Tax Credits Under the Inflation Reduction Act of 2022?