There's a lot about Toyota's large hybrid sedan that makes sense, but there's also a lot that leaves us scratching our heads.

You know that GIF of Larry David looking confused? That’s how I feel about the 2023 Toyota Crown. The de facto replacement for the Florida-snowbird-friendly Avalon, this large hybrid packs a number of characteristics that have it feeling right at home in Toyota’s current lineup. But at the same time, there’s some truly confounding decision-making in here.

Don’t get me wrong, there’s a lot to like about Toyota’s polarizing new mostly-a-sedan, most of which boils down to its two available hybrid powertrains and how they feel in execution. The majority of models will come with the base setup, which pairs a 2.5-liter naturally aspirated inline-4 gas engine to an electric motor, which routes through a continuously variable transmission before reaching all four wheels. Net output is 236 horsepower.

Those numbers don’t exactly jump off the page, but that’s fine. The Avalon wasn’t a peak performer in hybrid form, and neither is the Crown, but that’s the whole point. There’s more than enough electric shove to leave stoplights with gusto, and in around-town use, I never find it lacking for power. When the 2.5-liter kicks in, it makes a little bit of a clamor, but no more so than any other Toyota hybrid using the same gas-engine half. The CVT keeps everything nice and smooth.

One big reason to stick with the base powertrain is its estimated fuel economy. Toyota estimates that the lower tiers of Crown will achieve 42 mpg city, 41 mpg highway and 41 mpg combined. For something as large and heavy (north of 4,000 pounds) as the Crown, being this efficient is a great notch for the bedpost. In my brief drive around Nashville, Tennessee, I found these figures sufficiently easy to match.

Those looking for something with a bit more punch will find it on the Crown’s Platinum trim. This flagship variant carries Toyota’s new Hybrid Max powertrain. A 2.4-liter turbocharged I4 mates to an electric motor and a six-speed automatic transmission, putting out a solid 340 hp and 400 lb-ft. There is definitely more shove here, and the 2.4-liter sounds better when it’s operating, but it’s not exactly knock-your-socks-off quick. It also sacrifices a fair bit of fuel economy, with estimates dropping to 29 mpg city, 32 mpg highway and 30 mpg combined — but again, these figures are not hard to achieve.

In addition to a beefier powertrain, Crown Platinum models also pick up an adaptive suspension system, which can soften or stiffen in different drive modes. The XLE and Limited versions do just fine with the standard fixed suspension, which offers a Venza level of cushiness that I appreciate, so consider the adaptive setup to be the optional sprinkles on an otherwise delightful sundae. There is some body-roll reduction in Sport S Plus mode, not that anyone intends on hustling this thing around switchbacks, but you could if you wanted to. The Crown’s plushest Comfort mode is where I prefer to spend my time, softly careening over the road as the dampers soak up most of the nasty asphalt underfoot. 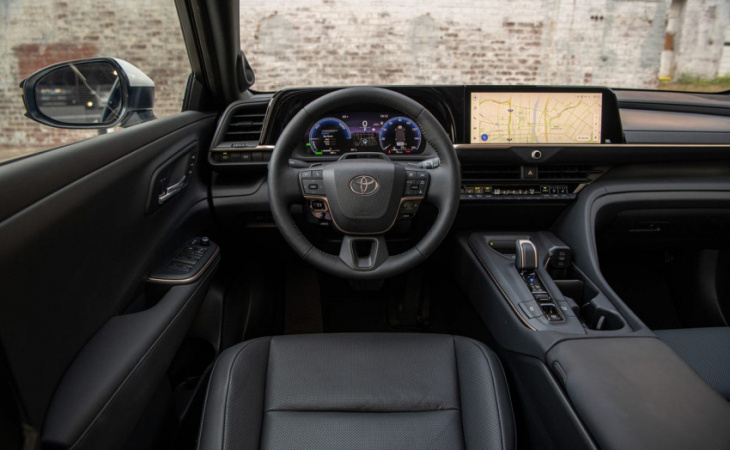 The Crown’s interior is nicely laid out, and everything you’d need is within easy reach, but there are some questionable ergonomics in here, as well. Toyota

Cabin tech marks another high-water point for the 2023 Toyota Crown, which shares its best stuff across all three trims. In addition to a standard 12.3-inch gauge display, a 12.3-inch infotainment touchscreen is also standard, and it runs Toyota’s new Audio Multimedia system, which is a marked improvement over crappy old Entune. The graphics are crisp, the system itself is responsive and its Google-based mapping may actually keep you from firing up Apple CarPlay or Android Auto as often, though both are standard.

Find the right car for you View Local Inventory

Four USB-C ports adorn the interior, in addition to a sole USB-A in the center console, but my favorite part is the vertically mounted Qi wireless charger, which saves space while keeping your phone within close reach, so it’s not forgotten upon arrival.

On the safety front, the Crown comes standard with Toyota Safety Sense 3.0, the latest iteration of the automaker’s suite of passive and active driver aids. This includes automatic emergency braking with pedestrian and cyclist detection, adaptive cruise control, lane-departure warning, lane-keeping assist and automatic high beams. It also includes Proactive Driving Assist, a new feature that helps maintain a proper distance between the vehicle and pedestrians or cyclists. Blind-spot monitoring is standard, too. 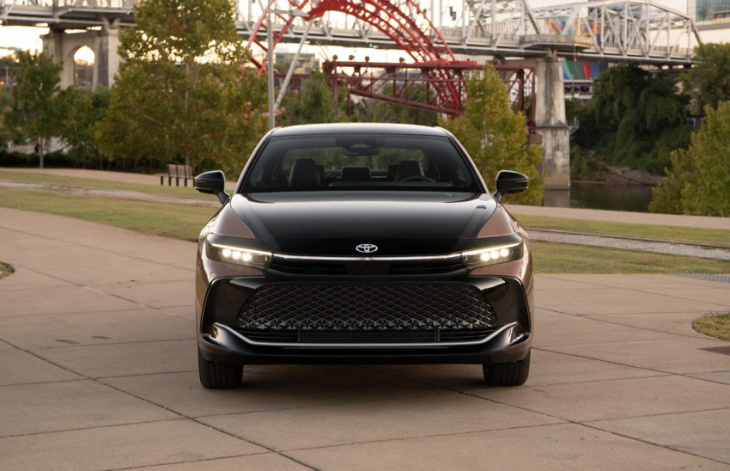 The Crown’s front end, which shares some design elements with the BZ4X electric SUV, is probably the least polarizing part of the car’s design. Toyota

Before you drive the 2023 Toyota Crown, you have to bear witness to it, which is where the weirdness starts. The Crown is most definitely a sedan, and Toyota agrees, but it’s still a funky one. The cladding over the wheel arches adds some visual height to the affair, yet the car only rides 0.1 inches higher off the ground than a Camry.

There’s also a lot of visual bulk around the rear end, definitely the strangest part of the Crown, with strange panel cut lines around the taillight edges that give off Lucid Air and Lincoln MKC vibes. However, the Crown has a standard-shaped trunk opening, unlike the two aforementioned cars, which use that cut line as part of the liftgate. Heaven help you in a rear-end collision; there are a lot of small, individual bits to replace. 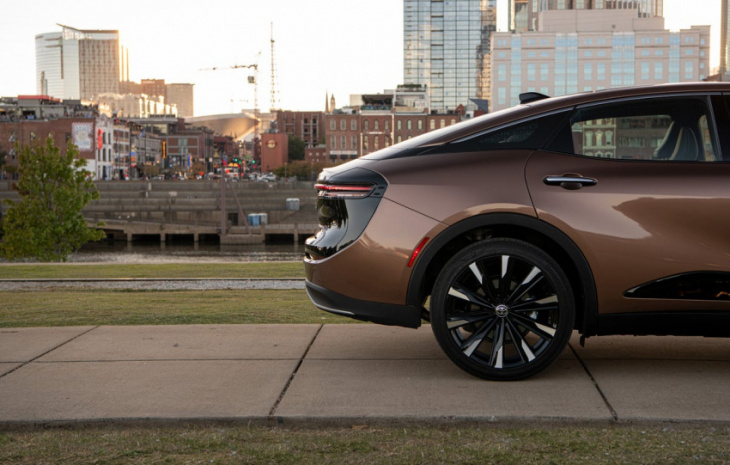 The lines back here are funky, but they do help break up what would otherwise be a very visually bulky area. Toyota

The interior is more straightforward. The fit and finish is standard higher-end Toyota, in that there are some darn decent touch points above the belt line, with a surprising number of harder plastics in the lower half. The layout is good, with moderately sized cup holders within easy reach, plenty of physical buttons for quick muscle-memory actions and a proper volume knob smack-dab in the center of the dash.

However, the ergonomics are where the Crown gets puzzling once again. The center console has a large trim piece that sort of builds a wall between the driver and front passenger, leading to a slightly claustrophobic feeling when riding shotgun. Despite sharing a similar ride height to the Camry, a Crown driver sits 4 inches higher. I really wish the seat’s lower bound for height adjustment was, you know, lower, because even when bottomed out, if I lean my head to the left, it contacts the hard plastic oh-shit handle on the headliner above the door.

Anyone stuck in the middle of the backseat loses at least an inch of headroom due to a massive hump of seat material, which is troubling, as all three potential rear passengers will find themselves bumped up against a surprisingly large ceiling protuberance — probably the motor for the glass roof’s sunshade. 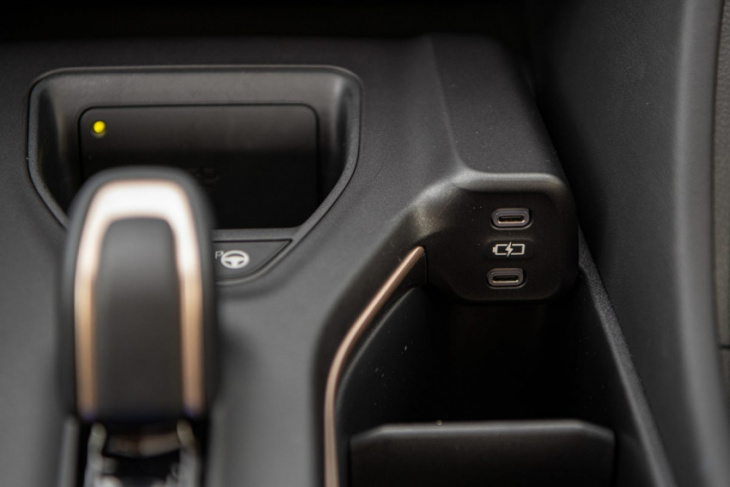 Credit to Toyota for having one of the most ingeniously designed wireless device chargers in the industry. Toyota

Down to brass tacks

Despite some of the issues I’ve mentioned, which could’ve been avoided by making this sedan a little more, I don’t know, sedan-ish, the 2023 Toyota Crown is still a solid successor in the automaker’s full-size lineup. It’s comfortable, it’s efficient, and buyers can throw a few more bells and whistles (and horsepower) into the mix by opting for the Platinum and its Hybrid Max powertrain. Will it resonate with everybody? Probably not. But for those looking to stray just a few microns off the usual path, there’s a lot to like here.