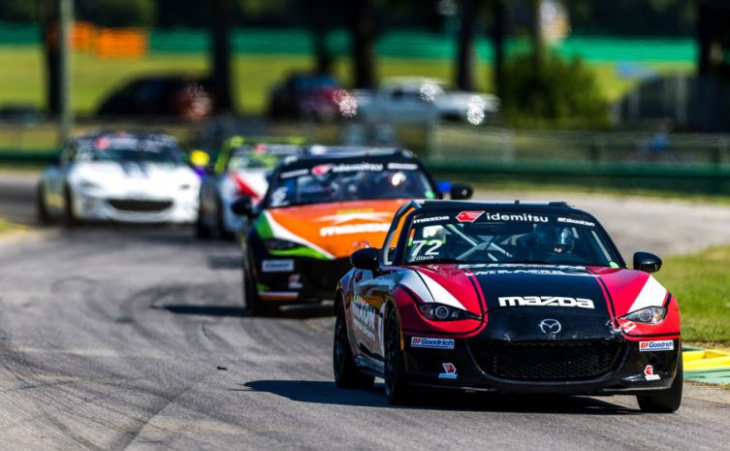 After a race-long battle with defending champion Gresham Wagner and defending rookie of the year Sam Paley, Zilisch beat Wagner to the finish line by a half-second in his No. 72 Hixon Motor Sports entry.

Zilisch started the 45-minute race alongside polesitter Aidan Fassnacht. The duo held those spots for two laps before the only full-course caution of the race was issued on lap three to retrieve the car of Joey Atanasio from turn 10.

When green flag racing resumed, Fassnacht lost the draft and fell down the order, handing the lead to Zilisch.

Much like Saturday’s race, Zilisch and Wagner were nose-to-tail lap after lap, trading the lead as they attempted to break free from the rest of the field. The progress they made came undone when Zilisch made contact with the back of Wagner’s car in turn one.

Both drivers were able to avoid spinning out completely, but Fassnacht and Paley caught the duo and were now part of the lead battle.

“That was completely my fault,” Zilisch admitted. “We braked at the same point. I braked a little earlier if anything, but the last third of the brake zone I got a hard pedal and it just kind of went. I’m really glad he was able to save it. I really didn’t mean to do that. I’m sorry to Gresham [Wagner], but I’m just happy we were both able to keep going.”

“I think most people probably would have spun out there,” Wagner said. “I had that flash of spinning out and losing all the points. It was like time stood still there for a second, but I managed to gather it up and just recalibrate. At that point it was a four-car race, but I knew Jared [Thomas] wasn’t having the best day and Connor [Zilisch] was my main competition.”

Not long after, Fassnacht was eliminated from that fight when his engine expired in the downhill rollercoaster.

Zilisch was determined not to repeat Saturday’s race where he came up just shy of the win. The Mazda MX-5 Cup Shootout Scholarship winner planted himself firmly at the front and let Wagner and Paley duke it out for the remaining podium spots.

“I knew what I wanted to do,” Zilisch said. “We got the lead coming to the white flag and just had to defend going down the back straightaway the right way, which I did. I was able to keep him [Wagner] behind me going through Roller Coaster and down into Hog Pen. I’m super proud of the car the team brought me once again.

“We had the best car and it showed. We were finally able to get that win here at VIR. To win three of the last four races in MX-5 Cup is pretty awesome. I’m really looking forward to Road Atlanta and making it a championship fight.”

It is Zilisch’s third win of the season.

The 16-year-old also won both races at Road America. Not only does this strengthen his bid for the $80,000 Rookie of the Year prize from Mazda, but Zilisch is a real contender for the overall championship.

Wagner’s approach to Sunday’s race was the same as Saturday’s: less risk is reward. The defending champion made his moves where he could and led five laps of the contest, but in the closing laps he was focused on finishing.

“It’s still a good day because for the weekend as a whole, third and second, with the struggles that everyone else had, I think it’s kind of like two wins,” Wagner said. “Especially after an up and down year, to put it together here when it matters at the end and get back to the championship hunt is super important.”

Zilisch and Wagner have great respect for each other, which made for spectacular racing all weekend.

“He’s [Zilisch] somebody you want to race hard with and that you can trust to race smart,” Wagner said. “He’s also one of the hardest people you will have to race for the win.”

“We both trust each other on the track,” Zilisch agreed. “I think that’s why we are able to race together so well and make it work. I’m glad he and I are on good terms.”

A third-place finish was a relief for Paley, who started 10th and had to be very careful to pick his way through the field in the opening laps.

“The draft is so big on this track: you’re always kind of in it and you pick your way through the field and be smart about it,” Paley said. “You need to make calculated moves and not take big risks. Luckily there were some incidents we didn’t get involved in and then kind of got up to that front pack. I was sitting third or fourth knowing we had a good car and Gresham [Wagner] and Connor [Zilisch] got into it.

“I just tried to hold on, but the car fell off a little bit at the end. I tried to make a move on the last lap, but I backed out because it was a little too risky. It was a good race and I’m happy. Thanks to Country Damn Music and McCumbee McAleer Racing!”

After a disastrous race on Saturday, championship leader Jared Thomas was horrified when Sunday’s race appeared to be going the same way. Quick work from his crew turned the day around.

“At the beginning it was a nightmare and I had seen it before,” Thomas said. “The car was un-drivable actually. I went out and said ‘guys I don’t think I can drive this, I’ve got to come back’ and they were like ’we’ll jack it up and see if we can move the alignment.’ Sure enough, we found something, just winged it and hoped it was good enough. I can’t thank those guys enough.

“Thankfully we caught that caution and I just put my head down and went. I had a really fast car. I’ve had a fast car all weekend, we just had terrible luck. Everything after that went right for the most part. We were able to come away with some bonus points and a top five finish.”

En route to his fourth-place finish, Thomas also set the fastest lap of the race, earning him a further 10 points.