YouTuber's Lamborghini Huracan STO Crashes And It's Easy To See Why

Nobody was hurt, though we can't say the same for the track-focused supercar. 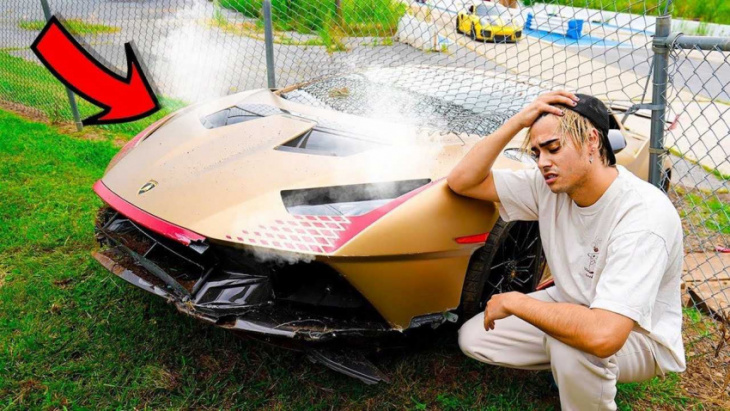 Armed with lots of aeros, a lighter carbon fiber body, and a better set of Formula 1-derived Brembo CCM-R brakes, the Lamborghini Huracan STO makes for a track-focused V10 supercar that deserves respect. But no matter how well-equipped a car is, improper use or the lack of proper skills is a huge threat to the car and its occupants.

That’s what we have here: a Huracan STO owned by YouTuber Darius Dobre. He’s one of the Dobre Brothers – a YouTube channel that puts out various types of content and currently has 10 million subscribers. The channel’s latest upload (embedded atop this page) showed a Huracan STO, driven in what appeared to be an abandoned drag strip.

At first, it was fine. The Lamborghini Huracan STO was speeding through the strip, timed by the other Dobre brother. On its return, that’s when the accident happened. The STO was speeding back to what should have been the starting line. Both the onboard and outside cameras showed that the Huracan braked too late, resulting in a horrible crash that saw the supercar driving through a fence.

Thankfully, despite the lack of proper gear (except for the gloves), nobody was hurt. We wish we could say the same for the fence, which received massive damages from the impact.

The Lamborghini obviously sustained damages at the front, including the bumper, side mirrors, scratches on the paint, and a leaking fluid on the left side. Needless to say, the owner/driver was shocked from the incident. He said that it was his first car crash (and what better way than in a $300,000 car).

Let this be an example of how not to drive a powerful supercar. Vehicles of this magnitude are a different breed and definitely demand tons of respect.

As for the YouTuber, he said he’ll be back someday with the Huracan STO, presumably after the costly repairs… or maybe in a Bugatti Chiron. Yikes.

Keyword: YouTuber's Lamborghini Huracan STO Crashes And It's Easy To See Why

Supercars Production of Lambo’s V12 hypercar has come to an end. Got something in your eye? If life is a Lamborghini Aventador, then the mad king’s lament from That Scottish Play rings true. It has strut and fret its hour upon the stage, and it will soon be heard no ...


View more: Arrivederci, raging bull: this is the last ever Lamborghini Aventador

This time assembly is really over.

Production of the Lamborghini Aventador reached an end last week, marking a new milestone for Lamborghini in more ways than one. The final example was an Aventador LP 780-4 Ultimae Roadster, finished in a custom light blue color chosen by its Swiss buyer. The Ultimae version of the Aventador ...

Lamborghini has posted yet another teaser clip of its gravel-munching Huracan Sterrato off-roader, this time wearing a blue livery thrashing its way along a coastal strip. The clip released by Lamborghini’s official Youtube channel is titled Beyond the Concrete – Part 2, and shows the upcoming Sterrato is no stranger ...

Image: Lamborghini The Lamborghini LMDh car will miss the first year of competitive racing in the class with its racing debut earmarked for 2024. From the early teasers though, it should still look as radically styled as road-going Raging Bulls, just with V8 power this time around. Image: Lamborghini ...

The car that replaces the Lamborghini Huracán is rumored to get a twin-turbocharged hybrid V8 possibly making something like 850 horsepower. The engine’s origins and details remain in the shadows, but it’s possible we’ll get a preview of some of its components in Lamborghini’s LMDh prototype racer. The Italian ...

This Ducati is the perfect accompaniment for your Lamborghini

Why The Heck Did Lamborghini Build The Urus Performante?

Want this Ducati? You might need to buy this Lamborghini first

Is A Ducati Lamborghini Streetfighter V4 Coming At World Première 2023?

How Lamborghini is saving the V12