Lucid makes one of the world’s most power-dense electric motors pound for pound - this is how it was achieved. 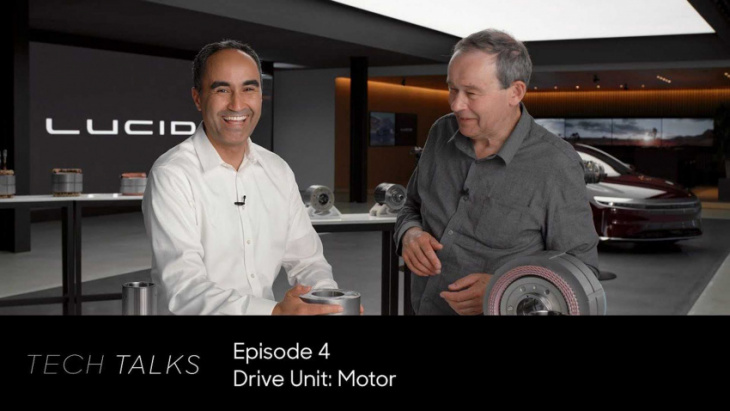 Lucid has just released the fourth installment in its Tech Talk series that describes various elements of company’s first offering, the Air sedan. This latest video is arguably the most interesting to many people because it explains the fundamentals of electric motors, how they work and what Lucid did to create a motor whose power density is “well beyond anything else offered on the EV market.”

The host for this video is Lucid founder, CEO and CTO Peter Rawlinson, an engineer by training, who does a great job of explaining some fairly complex physics. He starts by going into the basics of how torque and energy work, as well as how they are affected by the number of rotations per minute, gearing and other factors – it’s quite a good watch even if you think you know how electric motors work, although you will need over an hour free to watch the video in its entirety.

Peter Rawlinson enlists the help of Emad Dlala, Lucid VP of powertrains to compare the Lucid motor to equivalent units from Tesla and Porsche, mentioning among other things that its motors have a very unique cooling solution for the stator and that the copper winding process is done entirely by machines. This is apparently an industry first and it makes the stator lighter and more efficient and in combination with a smaller and lighter rotor, the Lucid motor ends up weighing just 31.4 kg (69.2 pounds), compared to the Tesla motor’s 40.1 kg (88.4 pounds) and Porsche motor’s 47 kg (103.6 pounds).

Basically what Lucid is trying to say is that its motor offers better power density compared to similar units powering other commercially available rival electric sedans. The side by side comparison of the three stators and rotors also shows how different electric motors actually are and how companies are trying to find different solutions to the same problems.

Weighing just the stator and rotors, they calculated that the Lucid motor provides 2.5 times more power than a Tesla motor (with a carbon-wrapped rotor) out of a tri-motor Model S Plaid. According to Lucid, its complete drive unit, which includes the inverter and reduction gear sets, weighs 74 kg (163.1 pounds), considerably less than the competition.

Keyword: You Will Understand Electric Motors After Watching This Lucid Tech Talk

Luxury electric car maker Lucid Motors is looking to beef up its working capital. To accomplish this, the company filed for a new offering of up to $8 billion earlier this week. The funding should help Lucid keep its operations going as it continues to ramp the production and ...

This comes as no surprise since it also appears Lucid is planning a massive expansion at its Arizona factory.


View more: Lucid Will Raise Another $8 Billion Via A New Offering

Lucid Motors added a new executive position within its software team this week and filled it with a former Apple employee with over two decades of experience. Lucid officially appointed Derrick Carty as Vice President of Platform Software Engineering, the company announced yesterday. “In this newly created role, Mr. ...

Lucid previously announced its intent to expand in Casa Grande, and now it has 2,000 acres.

Three Motors, 1200 horsepower Focused on Performance Vidéo : The Lucid Air on the Road in California Photo: Lucid The Lucid Air’s latest special edition – the Sapphire – was on display at the Quail Lodge during Monterey Car Week and joins the lineup as a high-performance iteration of ...

Watch as Ryan from The Kilowatts YouTube channel rides shotgun in the "incredibly powerful yet balanced" Air Sapphire prototype.


View more: Ride Along In A Lucid Air Sapphire Prototype As It Laps Laguna Seca

Is a 2022 Lucid Air GT Performance Faster Than a Dodge Charger Jailbreak?

Lucid Air May Be the Most Efficient Electric Car

Despite a 520-Mile Driving Range, the Lucid Air Has Worse Fuel Economy Than 1 EV