Yes, This Is An Aprilia Tuono V4 Snowbike And You're Not Imagining It

How do you feel about 173 horsepower and 89 pound-feet of torque in the snow? 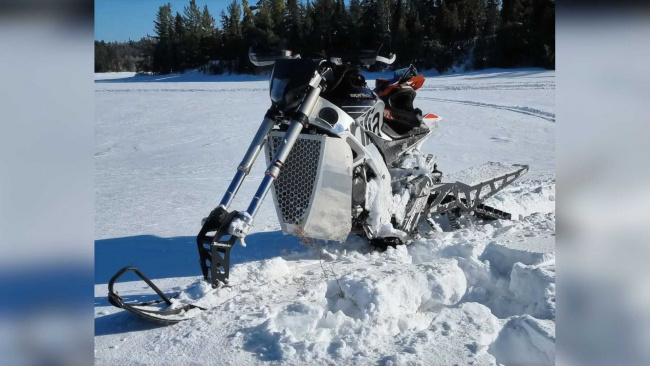 “Will it snowbike?” wasn’t a theme we expected to occupy January, 2023. Apparently, though, we were wrong! Earlier this month, the guys at the Grind Hard Plumbing Company YouTube channel successfully turned a used 2005 Suzuki Hayabusa into a snowbike and eagerly shared the results with the world. Using a Timbersled Riot conversion kit meant for dirtbikes, they successfully proved that it’s possible—even if the end result will need a few extra tweaks before they’re able to truly put it through more than just a test run.

Back in 2022, a different madman with a camera and a YouTube channel decided to document their bonkers snowbike build. Instead of a 500-plus pound Hayabusa, though, an Ontario, Canada-based creator with the username Mechatist decided to work his magic on a salvage-title 2019 Aprilia Tuono V4. (That’s totally the first thing you think of when you think of snowbikes, right? Right.)

While Mechatist also used a Timbersled conversion kit for this project, he chose an Aro kit instead of a Riot kit. Here’s how Timbersled characterizes the two kits: “the Timbersled ARO platform gives riders unbeatable precision and handling in all snow conditions, while the RIOT was designed for those that want a more playful, dirt-bike-like feel on the snow.”

In any case, as with the Timbersled Riot kit, the Aro kit was similarly not created with a powerful naked sportbike like the Tuono V4 in mind. It, too, was made for dirtbikes—so some serious modifications were in order to make the bike and the Timbersled conversion kit play nicely together. From Mechatist’s YouTube build video series, it seems that he was able to see his vision through, including machining some parts to make it all come together. (Unfortunately, the final video that shows it running is shot vertically, unlike previous videos in the series. However, you can find it linked in our Sources if you want to watch.)

Some KTM and Honda parts also made it into this build, but the bulk of the bike (including that unmistakable V4 powerplant) is all Aprilia. In one video, Mechatist also mentions sending the ECU away to AF1 in Texas to get it tuned in accordance with this application. The end result looks like ridiculous fun. Will we ever get to see it take on the Hayabusa in a future crossover video? Geography may be an issue, but you never know with YouTube creators.

Keyword: Yes, This Is An Aprilia Tuono V4 Snowbike And You're Not Imagining It