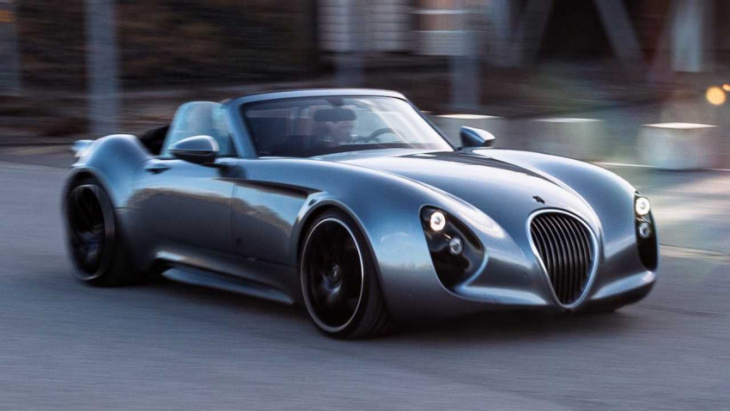 It’s still unclear when Wiesmann’s Project Thunderball will enter production. Information about the electric roadster has been trickling out for months, but its launch date remains a mystery. However, it should be getting close as Wiesmann is now taking orders for the car.

The roadster rides on a bespoke architecture. Wiesmann positioned the cabin as far back as possible in an effort to retain a classic shape, but the packaging proved difficult with the electric powertrain. Two electric motors sit behind the cockpit, powering the rear wheels. The T-shaped battery, positioned to lower the car’s center of gravity, occupies the central tunnel and runs into the front of the vehicle.

The 92-kilowatt-hour battery, of which only 83 kWh is usable, is expected to provide 311 miles (500 kilometers) of range. Wiesmann cools it with a water-glycol mix, while a bespoke Battery Management System allows engineers to fine-tune and optimize it for all driving conditions. It features 800-volt architecture, allowing for 300-kilowatt fast-charging capability. Wiesmann hasn’t specified how long it’d take to recharge the Li-ion NMC battery, which weighs 1,102 pounds (500 kilograms). The car, which has a carbon-fiber body, weighs a little more than 3,747 lbs (1,700 kg).

The powertrain delivers 680 horsepower (500 kilowatts) and 811 pound-feet (1,100 Newton-meters) of torque to the rear wheels. This propels the car to 62 miles per hour (100 kilometers per hour) in a claimed 2.9 seconds. Drivers can pick from five regenerative braking settings, which are accessible through the steering-wheel-mounted paddle shifters.

“Thanks to endless research and testing, the roadster will blend our bespoke cutting-edge powertrain technology with Wiesmann’s trademark German engineering excellence,” said Wiesmann CEO Roheen Berry. “We are putting the emotion back into EVs.”

Wiesmann will build the car at its “Gecko” factory in Germany. The company hasn’t announced when the model will go on sale, but the reservation books have been open since September. The company has already filled three-quarters of its first-year production allotment. The production version of Project Thunderball, which is just a codename, will have a starting price of €300,000 ($307,879 at today’s exchange rates).

Wiesmann is back, and this is the new Project Thunderball

Niche German performance marque Wiesmann made a return earlier this year under new ownership, plus a new focus on electric mobility with the reveal of the Project Thunderball electric sports car. However, the company hasn’t abandoned its heritage of gas-powered sports cars just yet. In fact, it’s working on ...

DUELMEN (Germany): German boutique sports car manufacturer Wiesmann is showing signs of life again after the coronavirus scuppered a previous comeback in 2019. Dubbed Project Thunderball, the prototype car is another classic two-seat roadster with a trademark oval grille, but this time with two powerful electric motors providing the ...

We haven’t heard much from Wiesmann lately, but the company has been promising a new model for what feels like an eternity. However, it’s been delayed as Wiesmann has quietly updated their website to say “Given the changes in the market over the last few years, a new exciting proposition ...

Wiesmann, the low-volume sportscar builder, has returned to production with the GTMF5 Coupe and an MF4 Roadster


View more: Wiesmann is back

Wiesmann returns with Project Thunderball, an all-electric roadster (Image credit: Wiesmann) Join our newsletter All the best features, news, tips and great deals to help you live a better life through technology Thank you for signing up to T3. You will receive a verification email shortly. There was a problem. ...

Wiesmann, a German carmaker founded by two brothers, has been in existence since 1988 although it may not be as well known as other specialist carmakers. Until it ran into financial problems and ceased operations in 2014, it had a steady business making and selling retro-styled sportscars with BMW ...

Electric The retro sports car builder is claiming a 0-62mph time of 2.9 seconds and a range of 311 miles When Wiesmann teased its new Project Thunderball roadster a month or so ago with some camouflaged winter testing pics, we wondered what BMW M division engine would be hiding under ...

The German sports car manufacturer Wiesmann has presented an all-electric roadster with 800-volt architecture under the project name Thunderball. It is still a concept, but it is intended to go into series production: Interested parties can already pre-order the 500-kW sports car. Although it is a purely electric car, ...

The Wiesmann Project Thunderball Is 680 HP of All-Electric Fury