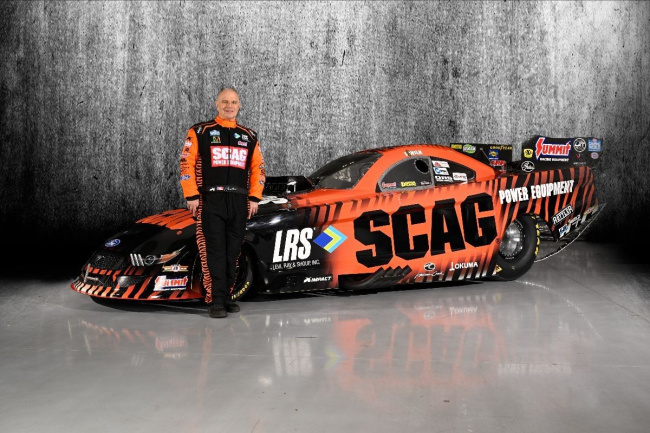 Years ago, NHRA Funny Car owner-tuner-driver Tim Wilkerson said that when he’s trying to sort out a situation, he gets out his lawn mower and cuts the grass.

So Tuesday’s announcement that the Springfield, Ill., privateer has merged his operation with that of Joe and Cathi Maynard’s JCM/DSR Racing team and acquired SCAG Power Equipment as his primary sponsor sounded like the perfect fit.

The Maynards will serve as co-owners of the 62-year-old Wilkerson’s Funny Car operation, which will compete as Maynard Wilkerson Racing (MWR). Wilkerson’s entire crew will remain intact, with Richard Hartman at the forefront. Levi, Ray & Shoup, his sponsor for more than two decades, will stay on as an associate sponsor. (SCAG’s commitment, he said, “has taken us over the top . . . but I didn’t want to lose that relationship. I’m a little bit of a sentimental guy. I had a hard time with that.”)

Wilkerson will be a teammate to eight-time Top Fuel champion Tony Schumacher. 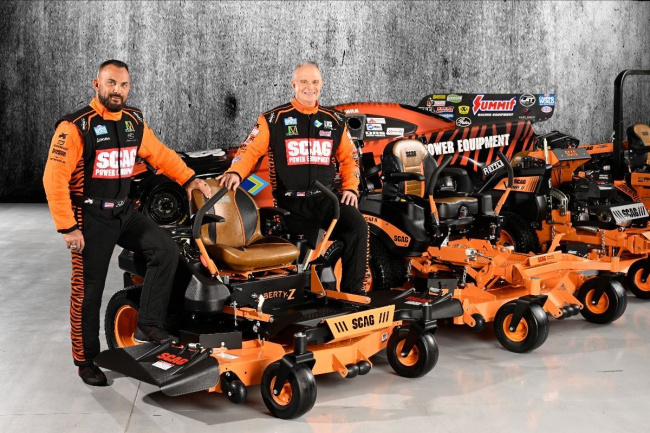 Tony Schumacher, left, is the Top Fuel side of the new racing merger.

“This is an opportunity to grow my team financially with Joe and with SCAG, Wilkerson, the 22-time Funny Car winner and 2008 series runner-up, said. He said his strategy for too long has been what he calls “racing scared” – wanting to be aggressive but forcing himself to play defense more often to conserve his equipment. While he won’t treat his fresh supply of new parts (and a new car that’s on the way) cavalierly, Wilkerson said that “a little bit of money is really going to make a big difference.

“We know what to do with the parts. If we have an issue, we’re going to be okay. And that’s going to keep me from racing scared. We got a darn good car. If you can make it 10-percent better, we’ll be in the top five easily.”

Maynard predicted his new two-car team can do better than that.

“I would love to see (some) double-ups, which you can’t count on. But I think as a goal for the team, both teams, we’ve set two to two-and-a-half (round-wins) a race, which is a good way to stay in the points,” Maynard said. “And if I had my real druthers, I’d see Tim Wilkerson win his first (championship), and Tony Shumacher could get his ninth, and then my wife would be smiling all the way home from that last race.

“So the outlook is to be very, very competitive and be a top-three team. And I think by the grace of God, possibly one or two championships could be in the mix.”

Wilkerson indicated he’ll still be the ringmaster in his own show. He’ll continue to trust his own experience and knowledge but lean occasionally on Schumacher’s trio of tuners—Mike Neff, Jon Schaffer, and Phil Shuler—if he gets into a jam.

“I’ve already made it clear that I don’t want somebody over my shoulder, chirping at me every run, because I’m not good at that,” Wilkerson said with a laugh. “If I get lost in my little rat maze, I got plenty of people to talk to now.”

The 2023 season will open March 9-12 at Gainesville, Fla., with the Amalie Motor Oil Gatornationals.

Susan Wade Contributing Editor Susan Wade has lived in the Seattle area for 40 years, but motorsports is in the Indianapolis native’s DNA.

Keyword: Why Tim Wilkerson Is Staking His NHRA Future with Maynard Wilkerson Racing