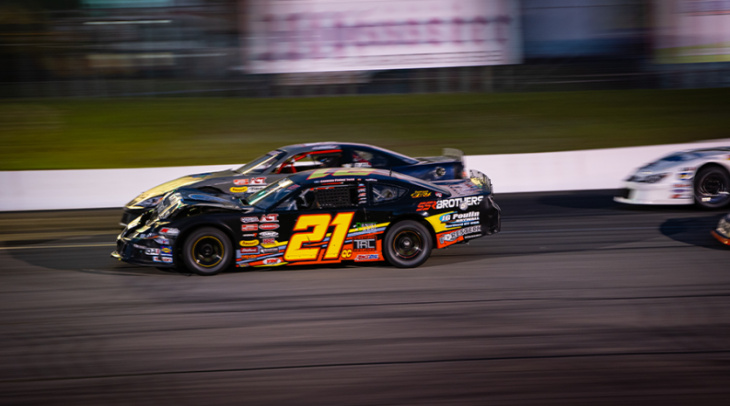 BARRE, Vt. — After taking a week off, the American-Canadian Tour returns to their Granite State home at North Woodstock, New Hampshire’s White Mountain Motorsports Park for the 44th Fall Foliage 200.

The extra-distance, $5,000-to-win Fall Foliage event is the final of three at the New Hampshire oval for the American-Canadian Tour in 2022 and comes at a pivotal time of the season.

With tracks across Quebec and New England wrapping up their championships, ACT Officials expect another big field of talented teams making the trip to one of the most popular tracks on the circuit.

D.J. Shaw has nearly completely shored up his American-Canadian Tour title run following his win just over one week ago at the 44th Labor Day Classic at Thunder Road.

After dominating the field to win July’s Milton CAT Midsummer Classic 250, Shaw is one of the leading prospects going into Sunday’s event with the A.H. Fence Ford Mustang.

Shaw returns to the place that introduced the New Hampshire native to full-fendered stock car racing and is looking to add yet another American-Canadian Tour crown jewel to his trophy case.

Top rookie contender Alexendre ‘Fireball’ Tardif is in desperate need of a win and White Mountain Motorsports Park is, statistically speaking, not his best track.

Tardif finished 15th in June’s Spring Green 122 and 18th in July’s Midsummer Classic 250 but the Quebec team is far from giving up.

Putting on the strongest title run from a Quebec team in recent memory, the Tardif crew has a lot of uncertainty coming up with never seeing the grounds of Seekonk Speedway in Massachusetts or Connecticut’s New London-Waterford Speedbowl.

They’ll need a strong run at the Fall Foliage to keep their title hopes alive.

If you’re looking for the closest example of a ‘sure thing,’ look no further than North Dartmouth, Massachusetts’ own Derek Gluchacki.

Gluchacki has been nothing short of perfect at White Mountain after sweeping all three of the Wall’s Ford Platinum Late Model Series at the track throughout the summer, en route to the inaugural championship.

The versatile team has also taken down wins at Oxford Plains, Thompson, Seekonk and New Hampshire Motor Speedway this season, speaking to their ability to regroup quickly for the best results.

With four events still left in the season, both Gluchacki and Tardif are still mathematically capable of taking over the championship at or just before the season ending New London-Waterford Speedbowl 150 in October.

Unfortunately for them, the Arny Hill – D.J. Shaw combination continues to have just one finish outside the top ten in over 30 events together. Stranger things have happened in racing, we’ll just have to wait and see.

Williamstown, Vermont’s former American-Canadian Tour Champion Jimmy Hebert will make the short trip over the Kancamagus Highway to one of his favorite racetracks next Sunday.

Hebert is looking to make it two-in-a-row at the Fall Foliage after taking last year’s event over Gabe Brown and Gluchacki.

North Haverhill, New Hampshire’s Ryan Olsen has also submitted his entry for the Fall Foliage 200 after powering up to a 10th-place finish at the Midsummer 250 along with Waterbury Center, Vermont’s Tanner Woodard.

Woodard took a 5th-place finish in just his second American-Canadian Tour start at Maine’s Oxford Plains Speedway in August, he’ll be one to watch at his home-away-from-home this Sunday.

Part of a doubleheader Fall Foliage weekend, the Pro All Stars Series Super Late Models and Modifieds roll into town on Saturday, September 17 joined by the Woodsville Guaranty Savings Bank Strictly Stock Minis as they crown their White Mountain track champion and the Dad’s 4 By Tool & Supply Kids Division.