The 2023 Chevrolet Tahoe is one of the most popular full-size SUVs on the market, and it comes with many crowd-pleasing features. However, as with other full-size SUVs, the Tahoe isn’t cheap. Still, Chevy offers a handful of trim options that should have a little something for everyone. Here’s a look at the 2023 Chevrolet Tahoe and which trim may be the best for you and your budget.

The 2023 Chevy Tahoe LS is the cheapest trim available 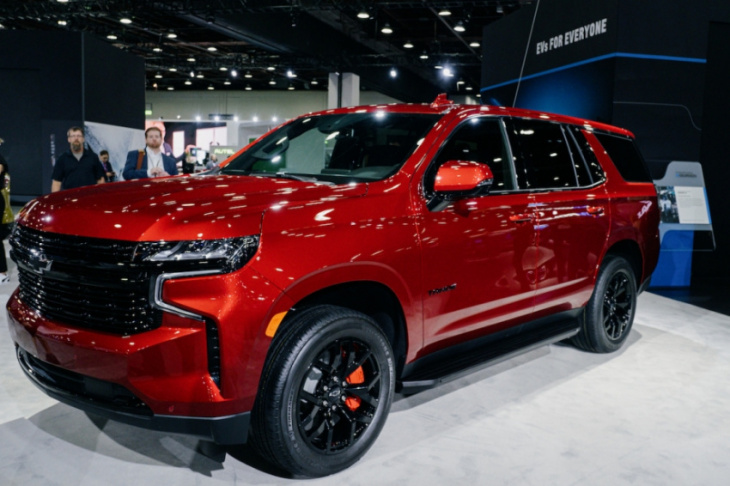 According to Cars, the LS trim is the Tahoe’s base trim, and as such, it’s the cheapest trim. It starts at about $56,000 and includes some powerful specs and valuable equipment. For example, it comes standard with an 8-inch touchscreen display, wireless Apple CarPlay and Android Auto compatibility, and a tri-zone climate control system.

It also has a 5.3-liter V8 engine paired with a 10-speed automatic transmission. The V8 gives the Chevy SUV 355 hp. Rear-wheel drive is standard, and shoppers can upgrade that to a four-wheel drive system by paying $3,000.

The LT trim starts at about $61,500 and is similar to the LS trim. The main difference between the two trims is that the LT trim has some additional premium equipment. This Chevy SUV has a 10.2-inch touch screen instead and a 12-inch digital instrument cluster. It gets a hands-free liftgate, wireless phone charging capability, and a premium nine-speaker stereo system from Bose as well.

The 2023 Chevy Tahoe RST is performance-oriented

The RST trim is the Tahoe’s performance trim, but car shoppers will have to pay extra to access its best features. The RST trim starts at $64,000 and gets some exclusive accents that make the SUV look slightly different. It comes standard with the 5.3-liter V8 that’s standard on the other trims, but it gets access to an optional 6.2-liter V8 that gets 433 hp. When fully equipped, the RST is the fastest Tahoe Chevy ever made.

The Z71 trim is for off-roading adventures

The Z71 trim costs $66,000, and it’s designed for off-roading. As such, it comes with off-roading upgrades, some of which are exclusive to the trim. For example, Chevy enhanced the SUV’s ground clearance, added a front-mounted skid plate, and has 20-inch all-terrain tires. Chevy gave the Z71 four-wheel drive, unlike the other trims, as a standard feature.

The 2023 Chevy Tahoe Premier is a luxurious SUV

The Premier trim starts at a bit over $69,000 and pushes the Tahoe toward being a luxury full-size SUV. It’s similar to the other Tahoes under the hood but has much more equipment and a nicer interior. The Premier trim has leather seats, a 10-speaker premium stereo system from Bose, and power-operated second and third-row seats. On top of that, Chevy Super Cruise, which is Chevy’s semi-autonomous self-driving feature, is an option on this trim.

The High Country trim is the Tahoe’s top trim

The High Country trim starts at just under $75,000, and it’s the Tahoe’s top trim. Like the Premier trim, the High Country trim pushes the Chevy SUV into being a luxury SUV. In addition to the other premium features carried over from other trims, it gets leather seats in the first two rows, heated and ventilated seats in the first row, and a wood trim design. It has 22-inch wheels, exclusive badging, and owners can equip this Chevy SUV with Super Cruise as well.

Keyword: Which 2023 Chevrolet Tahoe Trim Is Best for You and Your Budget?

The driver was allegedly street racing and only received minor injuries.

What is special about the Corvette Z06? Which is faster, a Corvette or a McLaren? Is a Corvette as fast as a Lamborghini? Is the 2023 Corvette Z06 a supercar? The new 2023 Chevrolet Corvette Z06 takes the formula of the C8-generation Corvette to the next level. However, the ...


View more: Is the Chevrolet Corvette Z06 Faster Than Other Supercars?

Witnesses say the Corvette was possibly racing on the freeway when the crash occurred.


View more: This C7 Corvette Ejected Its Whole Engine in a Highway Crash

Before the exhaust was taken off, the Z06 was able to lay down 640 hp to the wheels on a dyno.


View more: Listen to the Incredible Sound of a Straight-Piped C8 Corvette Z06

Revisiting the 2002 Chevrolet Avalanche, MotorTrend’s Truck of the Year

Need advice: Buying a 2017 Chevrolet Cruze for 7L. Worth it?

The 2019 Chevrolet Malibu Is Autotrader’s Pick for the Best Used Midsize Sedan Under $20,000