I’ll be blunt as an F-150 bullnose: referring to a square body Ford pickup truck is a great way to piss some people off. And honestly, when someone says “square body trucks” they are usually talking about a 1973 through 1987 Chevy or GMC. But some classic F-Series owners–myself included–will refer to our trucks as square body Fords.

Is square body only Chevy?

Usually, the phrase square body truck refers to either a Chevy or GMC from 1973-87. But it is a slang term, and thus up to interpretation. I’ve honestly heard both Dodge and Ford owners refer to their 1980s classic pickups as square body trucks.

In the case of Dodge, the phrase square body is most commonly associated with the first generation of the Ram truck built from 1981 through 1993. But its use could extend to the round headlight, square body pickups Dodge built from 1972 through 1980.

In the case of Ford, I most often hear square body Ford in reference to the 1980 through 1997 F-Series trucks. This coincides with the seventh, eighth, and ninth generation of the Ford F-150. These are also among the generations of trucks considerd old body style, or OBS Ford trucks–according to J.D. Power.

You could certainly make a case that some of the older, slab-sided F-150 trucks were square body Fords. But I think the reason that this terminology is rarer for earlier trucks has to do with the Chevies of the era.

The 1970s Chevies were squarer than the Fords

Ford built an ornate, slant-nose version of its F-150 from 1967 through 1972. It built a slightly more utilitarian-looking, but still slant-nosed F-series from 1972 through 1979. In 1980, Ford introduced the “bullnose” F-150 which had a very square body. It continued building the bullnose style until 1986.

Today's truck of the day:1983 Ford F-150!
Fun fact: People like to call this style of Ford the Bullnose pic.twitter.com/YtV22BdESO

Why are the 1972 through 1979 F-150s rarely called square body Fords? It may be because their contemporary Chevy/GMC trucks were even squarer. These fifth-generation F-Series trucks still had a lot of chrome, round headlights that weren’t set into square bezels, a hood that jutted out over the grille, and rounded fenders. But in 1973, Cheverolet introduced a decidely square generation of the C/K trucks that it would build until 1987.

Fast-forward to 1988, and the Ford trucks were still much squarer. Chevy introduced the GMT400 series of its pickup truck with rounded body panels and stacked lights. GM was quick to brag that it was the first truck designed for aerodynamics. In contrast, the F-series had a very square body for the next nine years.

What year did Ford stop making a square body truck?

Classic pickup fans may disagree on the first year of square body Ford trucks. But they can all agree that the rounded design language Ford introduced with the F-150’s 10th generaiton, for 1997, spelled the end of the square body Ford. 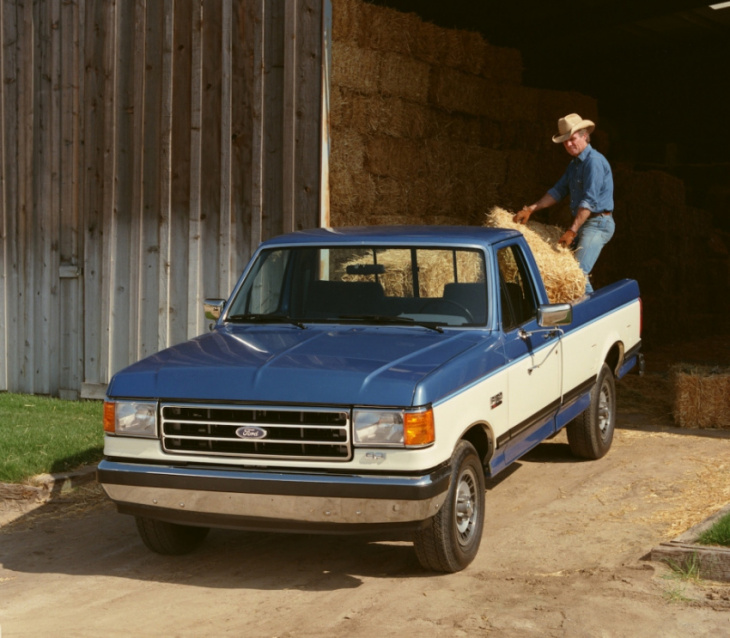 The backward slanted grille and sloped headlights of the 1997 F-150 were so popular, they remained an important part of the truck’s design through 2014. The 10th geneation also featured curved fenders and a rare stepside configuration. Many Ford fans consider the 10th generation of the F-150 an OBS Ford, even if its not a square body Ford.

Keyword: What Years Is a Square Body Ford Pickup Truck?