Today, automakers design pickup trucks in wind tunnels and brag about a low drag coefficient. But this was not always the case. The first generation Dodge truck to carry a Ram badge had about the same wind resistance as a brick. But its no-nonsense work truck looks and bulletproof drivetrain have endeared it to many classic truck lovers. Fans of this pickup truck lovingly call it the square body Dodge.

Dodge rolled out its first “Ram” pickup truck for the 1981 model year. It featured a huge, flat, crosshair grille and a square, slab-sided body. It also had rectangular headlights. Its industrial, unadorned style signaled its design as a no-frills work truck. Many classic truck fans refer to this first-gen Ram as the square body Dodge. A few fans claim that the “square body” generation actually began in 1972.

Square body truck is probably a term that originally described the 1973-1987 Chevy and GMC C/K series. Ford also has its generation of square body pickups. Dodge was very much following the design trend in Detroit with its 1981 Ram pickup truck.

The 1970s Dodge pickup trucks are easy to differentiate from the later square body. They have round headlights and grid-shaped chrome grilles. That said, they also have relatively square bodies. This is why certain truck fans also use square body Dodge to refer to any pickup truck the automaker built between 1972 and 1980.

Dodge introduced the second generation of its Ram trucks for the 1994 model year. These trucks featured a tall grille and pronounced fenders, giving them a less square body. Dodge continued building this second-generation Ram into 2002. 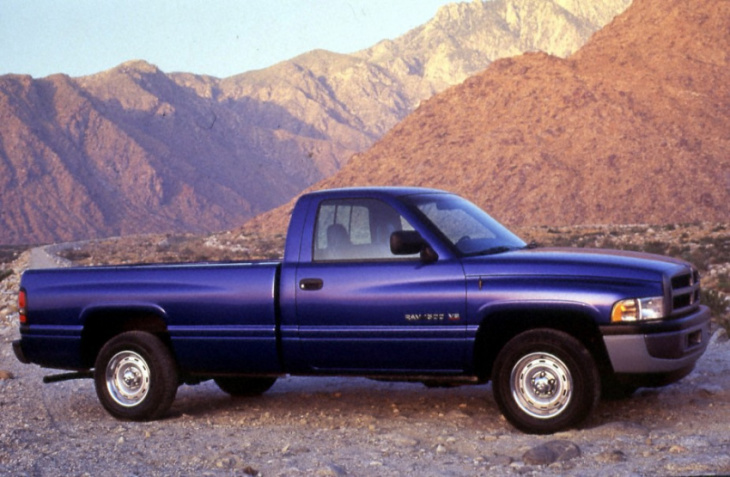 While other automakers such as Chevrolet have revisited the big-grille and flat sheet metal of the square body era, Ram never has. Every Ram redesign has been a slight variation of its more rounded second-generation truck. The automaker even continued using its signature crosshair grille until 2018.

Why are square body trucks so popular?

Many classic truck enthusiasts prefer the no-frills design of the squarer bodies popular in the 1980s. Part of their devotion might be to these drivetrains, but many also appreciate the classic styling. Some modifiers prefer the blank canvas of a truck with a simple, squared-off body.

While square body truck is usually a phrase reserved for General Motors pickups, it can also apply to the contemporary Dodges. With the marked difference between the 1993 and 1994 Ram, if you refer to a square body Dodge, most Mopar fans will know what generation you are referring to. Some classic truck fans love Dodge square body trucks so much that they have even dedicated a Facebook fan page to them.

Beginning in 1989, Dodge offered industrial-grade Cummins turbo diesel engines in its first generation Ram trucks. The torque, fuel efficiency, and reliability of the 6BT engine has made these first-generation Cummins Rams incredibly popular. Examples with 4WD and a manual transmission command the highest resale prices, some fetching more than $20k.

Next, find out the rarest and most expensive trucks of all time or see how the first-generation Ram stacks up to other square body trucks in the video below:

Dodge’s first new vehicle in 10 years The 2023 Dodge Hornet’s price, specs, and features The Dodge Hornet is a rebadged Alfa Romeo The Hornet will bring young buyers back to Dodge After years without a new model in its lineup, Dodge has released a lineup of new vehicles. ...


View more: Everything You Need to Know About the 2023 Dodge Hornet so Far

How much should an affordable used car cost? The Dodge Charger costs over $40,000 in Hawaii Other states where used muscle cars are too expensive Supply chain shortages keep popping up everywhere, prompting shoppers to purchase used cars rather than wait for new ones. However, combined with the aftermath ...


View more: The Dodge Charger Is the Least Affordable Used Car to Buy in Hawaii, According to iSeeCars

Ram owners were asked to rank their truck in 10 categories What do the experts say about the Ram 1500’s interior? There might be a simple explanation for the disconnect Truck owners are some of the most loyal auto enthusiasts out there. Consumers who buy trucks tend to be ...

Iveco Bus, a brand of Iveco Group N.V., has signed a framework agreement with the Flemish government-owned public transport enterprise De Lijn for the sale of a first batch of 65 E-WAY full electric city buses and further batches up to a total of 500 vehicles


View more: Iveco Bus signs a framework agreement for the sale of up to 500 electric buses in Belgium