From the December 2022 issue of Car and Driver.

Ford’s performance-focused Special Vehicle Team (SVT) made its debut with two 1993 models: the SVT Mustang Cobra and the SVT F-150 Lightning, a souped-up pickup that immediately divided the Car and Driver staff into “Why?” and “Because!” camps. Enough buyers fell into the latter for the F-150 Lightning to get a sequel with a big bump in power for the 1999 model year.

From 1999 to 2004, Ford produced just over 28,000 second-gen SVT F-150 Lightnings clad in the love-it-or-hate-it aero body (and Flareside bed) that arrived with the ’97 truck. Not enough to make them common, but enough to build a cult following such that, even today, owner forums thrive, and enthusiast meetups occur around the country.

Models from 2001 forward got a revised Triton 5.4-liter V-8 with more power, a shorter rear-axle ratio, and Bilstein monotube dampers. The best examples are 2003–04s, which benefit from factory updates that resolve common issues. The abundance of mods calls for careful parsing of potential purchases. Ensure work was done correctly and consider replacing any substandard parts.

A common issue with 10th-gen F-150s is the V-8’s tendency to eject spark plugs, and the Lightning is no exception. The 2003 and ’04 models got more threads in the cylinder heads to help resolve the problem, but it’s worth checking the plugs. Just be careful when removing them as their two-piece design is prone to breaking off in the head.

The arrival of the new electric F-150 Lightning has spurred a renewed interest in yesteryear’s supertruck, with prices jumping dramatically in the past two years. The days of sub-$20K second-gen Lightnings are largely gone, though the occasional 1999 or 2000 example may stray close to that range. Low mileage and originality are prized above all else and drive most high-dollar sales, with the upper end of 2001–04 models ranging from $40,000 to just under $50,000.

F-150 Lightnings for the 1999 model year had an Eaton supercharger strapped to a 5.4-liter V-8 that produced 360 horsepower and 440 pound-feet of torque. The 2001 model got a revised air-intake opening and mass airflow meter, plus a higher-flow intake, upping output to 380 horsepower and 450 pound-feet. Some final tweaks for 2003 included heavier rear leaf springs that increased payload capacity from 800 to 1350 pounds, in case you intend to use your Lightning to haul more than ass.

“The Lightning has broken our staff into those who think a high-performance pickup is dumber than bottled water.”— Larry Webster, C/D, April 2001 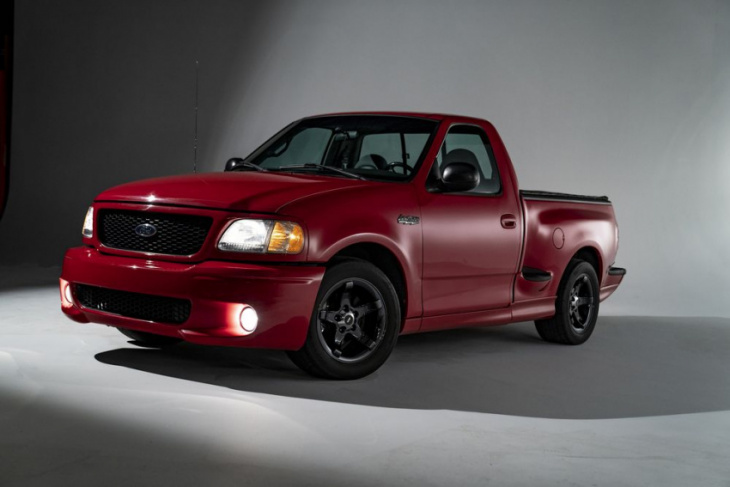