What does sensor fusion mean for the future of radar?

Gideon Kedem argues that cameras, radars and LiDAR are all vital to autonomous driving

There has been much debate about sensor technology within the automotive industry and the role that cameras, radars and LiDARs will play in the future of autonomous driving. The discussion has centred around the cost and viability of each sensor type, prompting some automakers to move away from radar and LiDAR solutions in favour of camera-based autonomous technology.

The reality is that each sensor type has its own strengths and weaknesses, and all three technologies are vital to the advancement of autonomous technology. Cameras excel in reading street signs and classifying objects but are limited in poor weather conditions. Radars provide accurate measurements of speed and distance and excel in poor weather but cannot read signs and struggle with traffic lights. LiDARs are highly accurate at measuring objects but are expensive.

While the use of radar in the automotive industry dates back to the 1980s, radar technology has been the subject of significant debate for years. That’s because legacy vehicle architectures limit the amount of data that radars can transmit to the CPU.

Does this mean the end for radar within automotive design? Not necessarily. 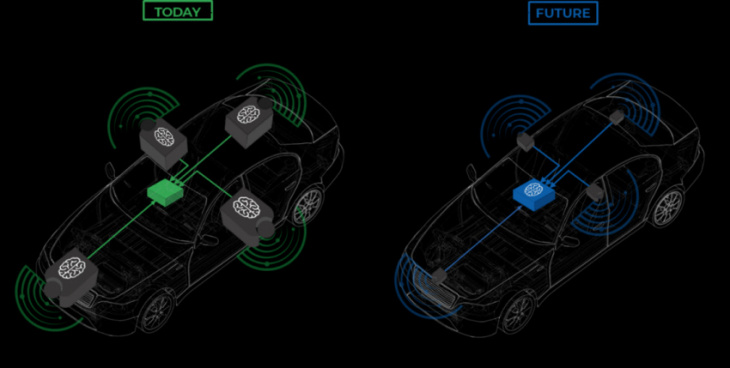 Radars generate massive amounts of data, but existing links simply do not offer sufficient bandwidth to support the transmission of raw data from radars to ECUs. This has forced radar manufacturers to dedicate local processing capabilities within their radars themselves. From a system perspective, this is sub-optimal as there is no single ECU capable of receiving all the raw data to make a robust decision based on it.

For radar manufacturers to make inroads in autonomous systems, they should transition from this architecture—where the radar and ECU are coupled at the edge—to a satellite architecture. This would move the data processing to a more centralised location in the vehicle, enabling an ECU to access raw data from multiple sensors. The more raw data processed by an ECU, the more accurate the decision can be.

This follows the trend of sensor fusion taking place in the automotive industry, which enables a vehicle’s central computing unit to account for various radars, cameras and LiDARs—each of which have their own strengths and weaknesses. Sensor fusion has the potential to significantly lower complexity and costs in this era of software defined vehicles, while helping cars make safer decisions. Centralised processors in the car can extract much more information from raw data using AI and machine learning techniques, which are harder to implement when processing the data from each radar sensor locally. With a significant number of software companies developing such algorithms, this can enable even higher accuracy and performance.

The satellite radar architecture has other advantages. By removing heavy local processing from the sensor unit, radars will become much more power efficient, as well as less expensive. Power efficiency is a top priority for OEMs as, with the electrification of the engine, power consumption by the various devices in the vehicle has a direct impact on the driving range of the vehicle. Reducing costs is also important because radars are usually located in vulnerable places within the vehicle that are susceptible to impact and damage.

Satellite architecture requires the tunneling of raw data at high bandwidth and low latency between the host processor and the remote sensors. This is the type of high-speed connectivity solution that the MIPI A-PHY standard aims to achieve. For the first time, the industry now has a streamlined, standardised solution to send high bandwidth raw data from radars to a central ECU.

All sensor types will play a vital role in enabling the next stages of autonomous driving, creating less uncertainty around the navigation environment. Centralised processing has the potential to vastly improve the current implementation of various sensor solutions, and this is where radar will continue to play a vital role moving forward.

The opinions expressed here are those of the author and do not necessarily reflect the positions of Automotive World Ltd.

Keyword: What does sensor fusion mean for the future of radar?

How will LiDAR impact the progression of autonomous driving?


View more: How will LiDAR impact the progression of autonomous driving?

How is ISO 26262 factored into autonomous vehicles? By Elle Farrell-Kingsley

Can Europe’s aerospace capital reinvent itself as a future mobility hub?

Toulouse is positioning itself as a centre for mobility talent, investment and innovation, writes Megan Lampinen


View more: Can Europe’s aerospace capital reinvent itself as a future mobility hub?

How can driving dynamics keep up with the autonomous, electric revolution?


View more: How can driving dynamics keep up with the autonomous, electric revolution?

An inside look at the UK’s Automated Vehicles Act

The UK is pushing ahead with revolutionary proposals to promote autonomous vehicles. By Paul Kirkpatrick The Law Commission for England and Wales and the Scottish Law Commission recently unveiled proposals for the creation of a revolutionary new Automated Vehicles Act. The proposals seek to regulate vehicles which are capable of ...


View more: An inside look at the UK’s Automated Vehicles Act

Alletta Brenner explores how existing liability rules could affect the speed and manner in which driverless trucks are adopted Truck driver shortages are one of the leading reasons for recent supply chain woes but the issue is hardly new. Lack of drivers has been the top-rated problem affecting heavy trucking ...

Regulation of self-driving vehicles: the recommendations of the Law Commissions


View more: Regulation of self-driving vehicles: the recommendations of the Law Commissions

Managing Volatility: The race to conquer an uncertain future in the CV industry

Megatrend development is enacting a profound change on the commercial vehicle sector, writes Roland Berger’s Wilfried Aulbur, Walter Rentzsch, Frank Pietras and Wenbo Yuan The transportation industry has seen solid growth over the last 20 years. Markets like the EU and North America have seen a CAGR of 3.8% during ...


View more: Managing Volatility: The race to conquer an uncertain future in the CV industry

Location data: the keystone of the software-defined car

Does the future of the automotive industry look secure?

The cyber security catch: the joys of connected cars comes with a caution

Where next for autonomous freight development?

The chip shortage is not about to end. What can automakers do about it?

Autonomy promises the ideal driver for every vehicle

An inside look at liability in the era of autonomous vehicles

AUTOSAR is the backbone of AVs and ADAS, but for how long?

Where next for location data?

Can autonomous CVs provide a realistic and sustainable future for last-mile logistics?