If you’re blessed with space for wrenching and thinking, never miss an opportunity for either. 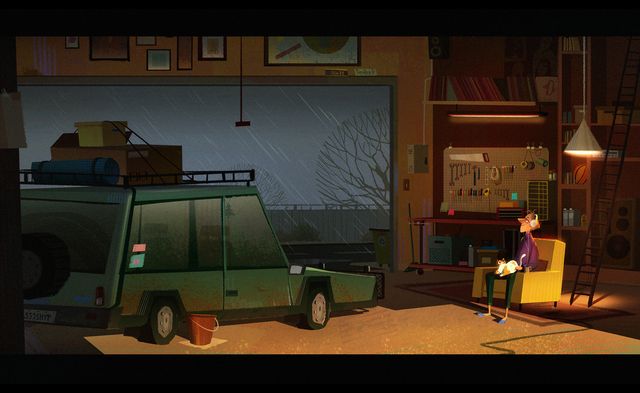 Weezer really said it best. “In the garage, I feel safe.” Those lyrics buzzed through my head last weekend when I sat down to drink a beer in my garage. That moment will seem unremarkable to nearly anybody reading this website, but I’ll tell you, that beer tasted something like quiet triumph.

It’s been a long time coming; If you regularly read Kinardi Line, you’ll know that my wife and I finally bought a house near Seattle after six restless years chasing R&T across the country. Between the moving boxes, packing tape, and removal of ancient pink toilets, there’s hardly been a breath for reflection. As anyone who’s moved recently can tell you, it takes years to whip a new place into shape. We’ll be lucky to have the last U-Haul box emptied by 2030.

But in the chaos, I stole away for a moment. To celebrate in some small way. A polite Seattle rain fell on the roof, a soft drumroll against the garage’s single broad window. It felt like a good moment for a sit, for a think, for a cold beer. So I sat and thought and drank.

Home ownership still feels like a distant stretch, even after my wallet’s been dented by the first mortgage payment. Seattle’s housing market rode a wild upswing for more than a decade, driven by high-paying tech jobs that outstrip the wages of middling writers like myself. We knew it’d take something special – possibly even miraculous – to land a house within our budget.

For that miracle, I must thank the almighty garage.

At the showing for our house, we met the owner’s son. He’d stopped by at that exact moment to mow the lawn. It proved serendipitous. Curious about the house, I struck up a conversation just before he left. We got to talking.

Turns out his family are fans of my beloved Washington State University Cougars. The home’s late matriarch was the most devoted of the bunch. She traveled for away games and sent her grandchildren off to the university in droves. After swapping WSU stories, the son led us around his old house, regaling us with memories. Eventually the conversation moved into the garage.

There, he told me the house had been occupied by racers. My ears perked up. The family’s two sons and their father ran a NASCAR-sanctioned stock series in the Eighties, he said. Their efforts produced dozens of trophies and thousands of memories, the garage’s rafters stuffed with old parts, a race trailer parked in the back yard. You could still catch a whiff of old gear oil or worn race tires around the edges of the place, but since his mother’s passing, the garage had been emptied of old racing junk. Only a single beam hung across the ceiling as a reminder. It was put up decades ago to pull engines at the end of each race weekend. The son said he’d feel better selling the family’s home if that old beam – and the garage that holds it – might see likeminded use in the future.

We offered asking price for the house, a maneuver that’d failed us maybe twenty times before. The owners graciously accepted, though the open market would’ve certainly brought more money. When we moved in a month later, after a nightmarish buying process, I found the son had left me a photo at my new work bench. It was an image of a race car in the house’s front yard, flanked by a dozen trophies. His brother stands there in the photo, a beaming smile with Eighties sideburns.

Larry Voeks dug septic tanks for a living. His “garage” was more like a full workshop tucked into the foothills of the Cascade Mountains. It rains a lot there. He ran his small business from the shop’s three wide bays, servicing the diesel engines and hydraulic fittings that powered his vocation.

On weekends in my early twenties, I’d show up at the north end of his shop and open the bay door with a long chain that hung from the vaulted ceiling. My grandpa was long retired by that time. Usually he was napping when I arrived. A series of heart attacks had slowed him, but he always seemed to appear at the right moment to offer advice (which I usually ignored) or a lukewarm beer (which I always accepted).

We never talked about anything pressing, but sharing beers under the roof of his shop changed dynamic between us. I felt more worthy of recognition in his eyes when my shirt was stained with oil, and yet, he always asked about my writing. Unlike conversations with strangers or even friends, I never felt ashamed to share my hopes and insecurities on that front. In turn, I learned about how he grew up, about his favorite spot to skinny dip as a teenager, about lifting a salmon or two from the nearby hatchery when food went scarce at home. Visits to his shop became a weekly ritual.

In time, that garage became a place of reprieve. A temple. It always seemed to be drizzling on that thin tin roof and sometimes I’d close my eyes and just listen instead of turning wrenches. When Microsoft laid me off in 2014, it took more than six months to find work again. Application after application was launched into the void, unanswered, ratcheting up the tension in my personal life. But I could always count on the garage to diffuse my angst.

As the jobless months wore on, I fiddled with my car for the sake of fiddling, heading out to the shop for projects that kept me busy instead of wallowing. One can find order in any garage; If something is broken, it can be fixed. Real life isn’t so easily understood.

Eventually I found work again. When it was raining in my new office, my thoughts often drifted to Grandpa’s shop, but my visits there went erratic and infrequent as my life moved forward. In time, my grandparents moved and my grandpa passed away. I’m left only with the memories.

The pattering rain sounds different in my own garage, dulled and hollow, but the rhythm brings back the smells and sounds of that old shop, and with them, a sense of melancholy. What can we do but keep driving into the fog?

My own garage is shaping into a space of its own, slowly. Hopefully I’ll hoist an engine or two with the help of that trusty old beam. Maybe in time I’ll grow grey and give up refrigeration and keep a pallet of cheap lager chilling on the floor and learn something new about my own grandson. Who could say?

If you yearn for a garage like I did, my advice is to hang in there. You never know when life will swing its arm around your shoulder and draw you close. If you’re lucky enough to have such a space already, go spend some time there alone with the sound of the roof in the rain. Cherish it. Take a moment to let gratitude wash over you, then get busy. In the garage, if nowhere else, you are safe.

Keyword: We Raise a Glass to Garages and Rain