GM says this is the first such failure of any supercharged LT4 V-8. 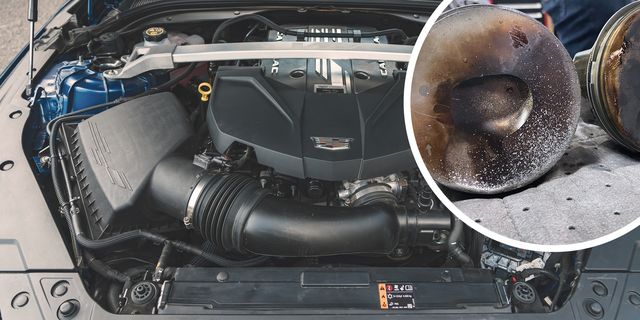 Our elation after taking delivery of a 2022 Cadillac CT5-V Blackwing for a 40,000-mile long-term test quickly turned to despair after its 668-hp supercharged V-8 suffered a catastrophic engine failure during our initial test session. After respecting the 1500-mile break-in period—keeping the revs below 4000 rpm and not sitting at a constant speed for extended periods—we hit the test track with just over 1800 miles on the odometer to log its initial performance figures. 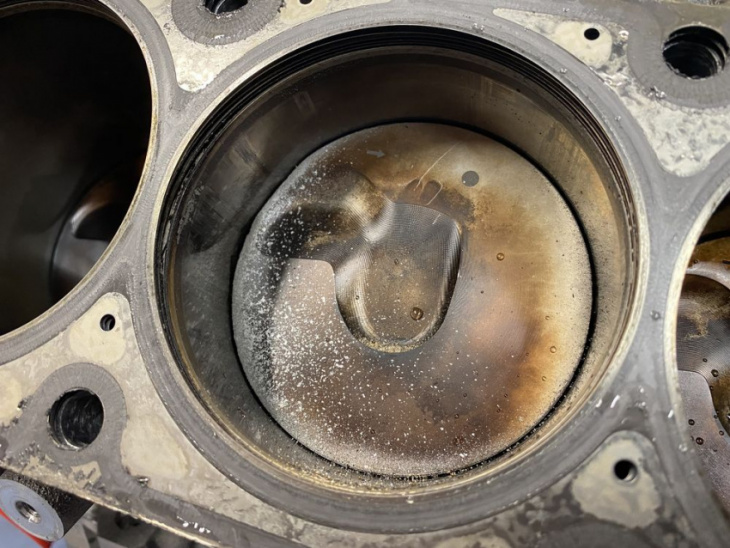 We took our time playing with the Blackwing’s exceptionally adjustable launch-control feature that allows the driver to select separate launch-rpm and slip-target settings, and then tried a few unassisted dances on the pedals with our ham hocks to see if we could beat it (we could). After about 15 launches, we were almost ready to call it when disaster struck. While coasting to the far end of the straightaway after a run, a host of warning messages popped up on the gauge cluster, all tied to a severe misfire. 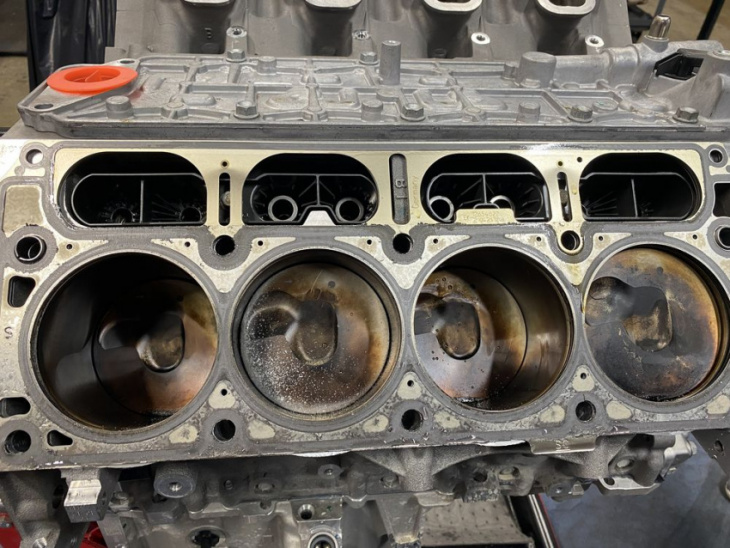 The LT4’s even cylinder bank where all the damage occured.

What happened? That’s a good question, one that wasn’t answered conclusively even following a complete teardown at GM’s powertrain headquarters in Pontiac, Michigan, where the engine went after it was removed by our local Cadillac dealer. The damage was limited to the even-numbered cylinder bank, with cylinder six taking the brunt of the carnage; its cylinder walls were scored, and aluminum plucked away from the edge of the piston and sprayed on top of it as well as on the exhaust valve. The severe temperature and pressure also blew off the ground strap at the end of the spark plug, and even the cast-iron cylinder liner showed some pitting.

Bad fuel could have caused this kind of pre-ignition or knocking, but then both banks would have been affected. So small-block assistant chief engineer Mike Kociba thinks it was likely one of two things that happened: Either the fuel supply on that side of the rail was somehow depleted—a contaminant restricting the flow somewhere—or a similar blockage in the cooling system that allowed things to get too hot. But, during the teardown, they didn’t find such a blockage in either system. 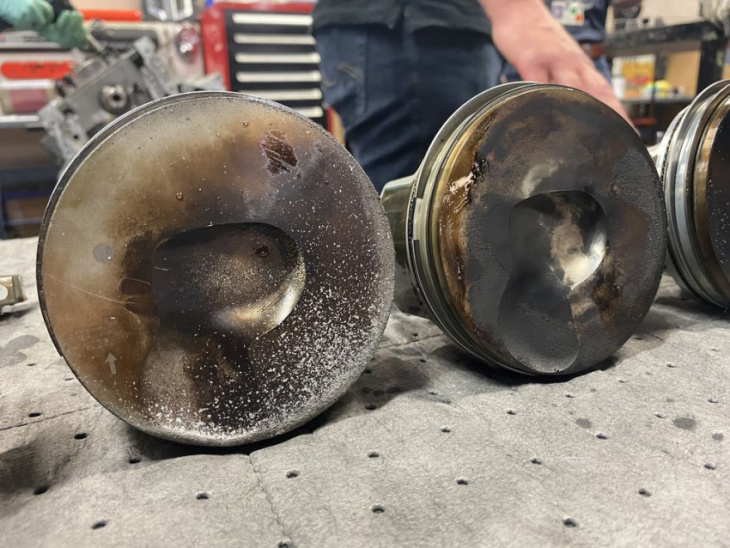 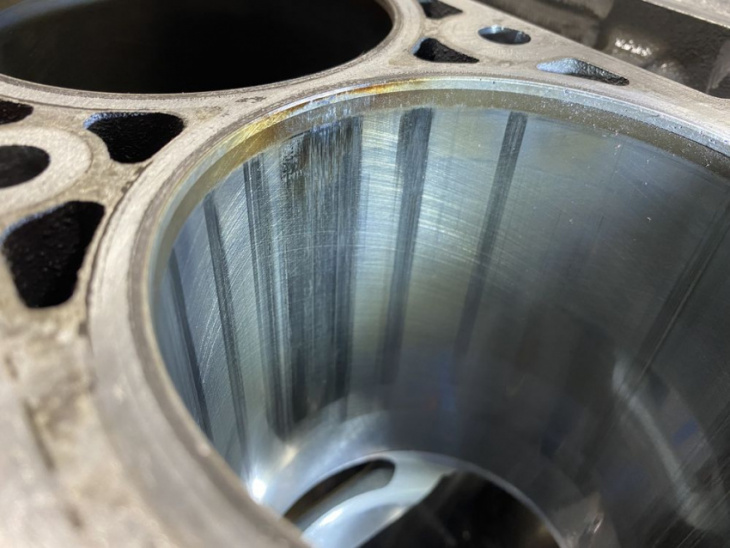 Kociba assured us it had nothing to do with the severity of our use, and that the engine can happily do standing-start launches all day. Furthermore, he said that of the roughly 20,000 supercharged LT4 variants of the Gen V small-block V-8 the company has sold to date—in the C7 Corvette Z06, Cadillac CTS-V, Camaro ZL1, and now the CT5-V Blackwing and Escalade V—ours is the first and only such failure.

However, this isn’t the first time a Gen V small block let go in our hands. The naturally aspirated LT1 V-8 in our long-term 2014 Corvette needed to be replaced after a connecting-rod bearing failed, likely due to a metal burr that originated from the block or oil-filter threads.

With our CT5, it took about six weeks for our local dealer to remove the engine, receive a new one from GM, and install it. And then, of course, we had to take it easy once again during a second break-in period.

Then we again hit the test track for much hard running, and this time it took it in stride, clocking a sprint to 60 mph in 3.7 seconds and 11.7 seconds through the quarter-mile at 124 mph, and shrugging off repeated runs. Just as we’d expect from one of the fiercest-ever sports sedans.

Keyword: We Blew Up the Engine in Our Cadillac CT5-V Blackwing During Initial Testing

My first experience with Super Cruise Is the XT6 a good three-row SUV for a large family? Final thoughts Schools are generally made up of a bunch of cliques — like jocks, nerds, and the all-around popular group. The 2022 Cadillac XT6 feels like one of the main stars ...

Long before Bugatti made 16 cylinders its calling card, Cadillac launched V-16-powered cars in a bid to outdo other luxury automakers. A prime example is this 1930 Cadillac V-16, today part of the Nethercutt Collection, which recently appeared on an episode of “Jay Leno’s Garage.” To keep the V-16 secret, ...

We drove the 2022 Bugatti Chiron Super Sport and found it hyperactivates the hypercar experience. With 16 cylinders, four turbochargers, and the ability to move from 0 to 60 mph in 2.4 seconds, the $4 million Bugatti should be intimidating, and it only is if you think about its ...

Tackling EV Torque Head-On Two Left Feet…Of Flame New Tech Old School High Stop me if you’ve heard this one before: an ultra-heavy truck that somehow manages to scorch the quarter mile in the 12-second range, while also dispatching the 0-60 sprint with a time that would have shamed ...


View more: Test Drive Review: The 2023 Cadillac Escalade-V Is A Horsepower Hammer In The Face Of The EV SUV Invasion

How powerful are we talking here? Does it keep up with the Germans inside and out? Come on, then – how does it drive? Cadillac CT5-V Blackwing: verdict Most powerful Cadillac driven Available with a manual gearbox Is it America’s answer to the German norm? It’s almost as if ...

In news to no car shoppers, the average transaction price for new cars reached another record high in August, creeping above $46,000 for the first time, according to J.D. Power. Electric car prices have been especially sensitive to increased demand and constrained supply, with popular models such as the ...