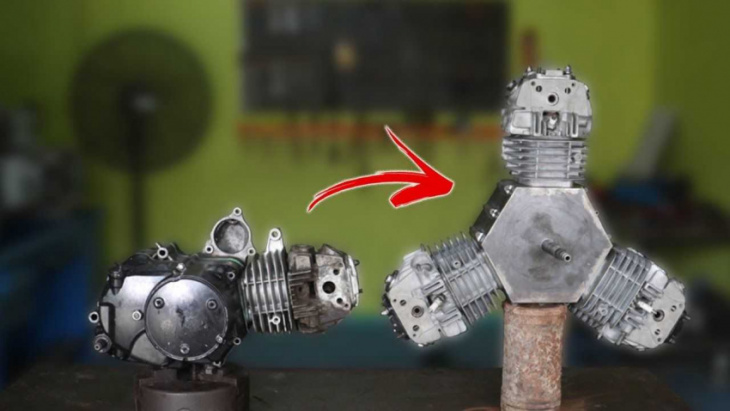 If you’ve got thirty minutes and a fascination for fabrication, then perhaps this video’s worth a view or two. Lets Learn Something posted part one of his three-cylinder radial engine project.

Radial engines aren’t totally outside of our spectrum of topics because however quirky these engines are, some people have been nutty/ingenious enough to fit them in a motorcycle’s chassis. On top of that, the engines used in this video were from Hondas.

Anyway, the near-thirty-minute video documents and details all the steps that were taken in order to turn three separate Honda motors into a (not yet working) radial engine. “Project no.34” as the channel owner calls it, was posted on YouTube late in June 2022, and he marked it as part 1. Who knows how many more parts there will be? Spoiler alert, by the end of the video we still won’t get to see the radial engine fire up.

Since the video was posted, however, Lets Learn Something hasn’t given us any updates. The description in the video reads: “after a few months of finding some materials and engine parts, here’s part 1 of my engine modification [which is still] in progress.”

It’s been about three months since that video was posted and it is very likely that the project is still ongoing and waiting for parts to arrive, such is the plight that many motorcyclists have to endure when waiting for parts for our project bike.

It’s likely that the video creator is waiting for a bunch of parts and raw materials to arrive. By the end of the video, we get a layout of the radial engine with the three-cylinder heads attached to a crankcase, plus a crank already installed.

I hope to see part two soon enough. Radial engines are fascinating because they’re so rare. Again, it’s been three months since the video was posted, and I’m eagerly waiting to see this project conclude with a start-up clip.

Keyword: Watch Someone Turn Three Old Honda Engines Into A Radial One