Watch: Mustang Does Donuts Runs Over Spectator Strips Pants Off

Spectators at street takeovers and car shows should know better than to get too close to Mustangs, given their penchant for drivers losing control. Unfortunately, one spectator never got the message. The tire-spinning Mustang ran him over when he got too close. And in the process of getting his legs run over, it ripped off his pants and underwear from the donut-spinning tires of the Mustang. No, we’re not kidding.

Watch what happens when a Mustang does donuts

This happened in Sacramento, California, at a shopping center parking lot near the International airport. This isn’t the first time the parking lot attracted this type of activity. The donut spree resulted in several arrests of participants and spectators. 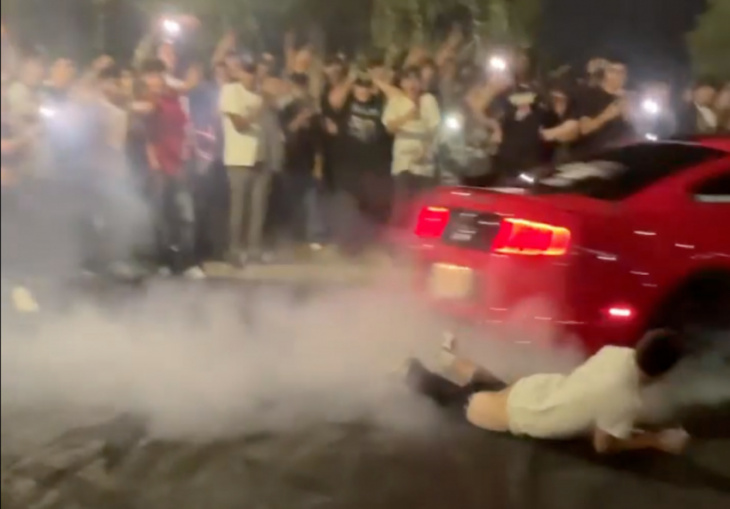 A spectator got way too close to the spinning-tire red Mustang. Especially when it’s a Mustang. He must have been angling for the money shot in his mind. Whatever the motivation, the Mustang cut sharp, never slowing down. Then, it quickly knocks the spectator to the ground.

Unfortunately, the impact swung the man’s legs under the car at the door. The Mustang then proceeds, running over both of the spectator’s legs before he has a chance to roll away. As the tires keep spinning, and with the spectator’s body momentum pulling away, his black pants and underwear get stripped off of him.

How bad were the spectator’s injuries? 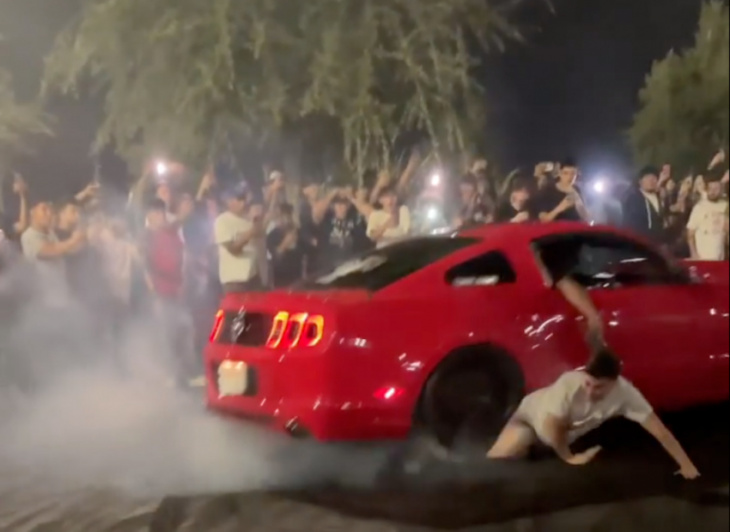 Miraculously, he pops up onto his feet and quickly yanks up his underwear and pants. Instantly, he is swarmed by other spectators helicoptering around him with phone flashes blazing. It is unclear why they would want photos instead of wanting to help him.

A picture souvenir apparently is more precious than providing some help. However, it doesn’t look like the victim suffered any serious injuries. So why not get something exciting for Tiktok? Now the knocked-down guy can be famous for something nobody wants to be famous for.

Why do Mustangs always lose control?

So, why do Mustangs get out of shape so quickly? First, it’s a live rear axle, with two coil springs and a stabilizer bar. For straight-line racing, as well as cost, it works great. But in many cases, the inside wheel in a turn grips the pavement, but the outside wheel loses traction. That’s how and why a car drifts.

But with Mustangs, especially without a limited-slip differential, each rear wheel bites and then spins independently of each other. This makes for an unpredictable cocktail of not-so-good. So the driver is dealing with instances of both understeer and oversteer in short bursts. Slightly overcorrecting for understeer, or instantly going from understeer to oversteer, leads to uncontrollable situations.

So that’s why you should give any hooning Mustang a wide berth. With the unpredictability of surface conditions, tires, and a possibly compromised driver, anything can and usually does happen. Keep this in mind the next time you’re watching cars leaving a gathering. You’ve seen those YouTube videos, so you know what can happen.