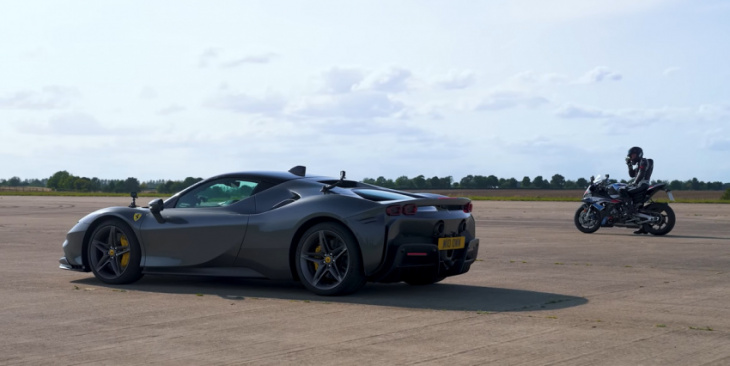 On the cheap end, production bikes are faster than production cars. With a $10,000 budget you’d have no problem getting a bike that could run away from any internal-combustion car that costs five times as much. But when you get to the ridiculous, over-the-top end of the performance spectrum and add in electric motors, cars are hard to beat.

Proof comes in the form of this new video from CarWow, which pits the Ferrari SF90 up against the BMW M1000 RR. The bike is BMW’s fastest, a special edition with M-branding and 212 hp on tap from a 999-cc inline-four engine. That’s quite a bit for a package that ways just over 400 lbs unloaded.

But it doesn’t matter. The Ferrari, with its half-million-dollar price tag and sophisticated hybrid system, is too quick. The gas-sucking V-8 makes 769 hp all on its own, but with the three onboard electric motors, total system output is 986 hp. That power goes to four driven wheels, giving the 3500-lb Ferrari a much bigger traction patch with which to unleash its 590 lb-ft of torque.

The result is a browbeating for the bike. An all-wheel-drive, 1000-hp hypercar is just too much to handle. But, given our first impression of the SF90, we’d bet the BMW rider had more fun.

Keyword: Watch a Ferrari SF90 Destroy a Superbike in a Drag Race