Waltrip Part I: Perseverance Through Adversity 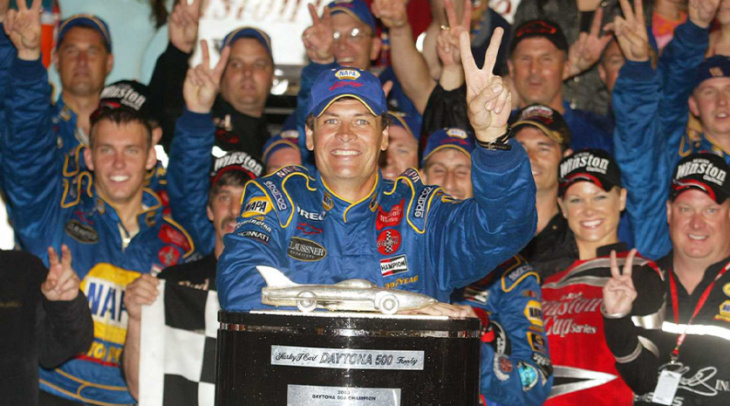 Editor’s Note: This is the first of a two-part series on former NASCAR driver Michael Waltrip. Part two will run tomorrow.

Michael Waltrip’s road to joining the exclusive list of multi-time Daytona 500 winners was unconventional to say the least.

After scratching and clawing his way to the NASCAR Cup Series, Waltrip endured a 15-year journey before breaking through in victory lane.

Before the ups and downs, there was a dream.

All Waltrip wanted to do was be like his older brother, 2012 NASCAR Hall of Fame inductee Darrell Waltrip.

“When I was born, my brother was 16 years old. When your brother is a future Hall of Famer and NASCAR champion, and he’s 16 years old, you know what he’s doing? He’s out racing somewhere,” Waltrip told SPEED SPORT. “By the time I knew what was going on in the world, he had moved off to Nashville and was racing in NASCAR.

“I just wanted to be like my big brother. I wanted to be a race car driver and race against Richard Petty, David Pearson, Bobby Allison and all the stars of the day back then, I just dreamed of that.”

Despite Michael Waltrip’s aspiration of becoming a race car driver, Darrell advised against it.

“I think I was 12, I called my brother and asked him if he would buy me a go-kart so I could go racing. As I reflect on this, I think it’s probably a lot of direction from my mom and dad. Darrell said, ‘Brother it’s too hard of a road. Mom and dad are getting up toward retirement age, they don’t have any money. You don’t have any money. So it’s probably just going to be a waste of your time and effort to think you could do this.’

“I hung up and thought, ‘Well, damn, that didn’t work out.’ But I had something that the other kids in my neighborhood didn’t have. That was my last name meant something in the racing world.” 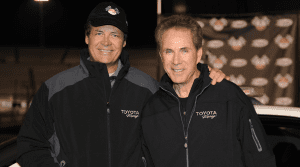 Thus, Waltrip sought to become a race car driver, despite his brother’s advice. The Owensboro, Ky., native purchased a go-kart and began competing at local tracks.

Though, a go-kart was just the beginning for Waltrip.

“I was a senior in high school, and a buddy of mine that helped me with my go-kart had built a race car in his garage by himself,” Waltrip said. “He said if I would help him work on it, I could drive it. His name was Carrie Everly.

“We got a little bit of sponsorship together from here and there and went out and won the mini modified track championship in 1981. That enabled me to get a ride in the NASCAR Dash Series and we won the championship there in 1983.”

With his immediate success behind the wheel, Waltrip’s confidence was at an all-time high.

“At that point in my life, with all I had accomplished on the go-karts and winning the track championship at Kentucky and winning the dash series, I thought, ‘I’m gonna be the next Richard Petty, I’ve got this,’” Waltrip said. “When I got to Cup racing, it just was a really long dry spell, trying to get to victory lane.”

Despite early success in the NASCAR Busch Series, which included a victory at Dover (Del.) Int’l Speedway in his fourth start in 1988 piloting his brother’s car, Waltrip endured a dry spell that lasted 462 races in the Cup Series. That number loomed over Waltrip’s career for years.

“I’d beat them all before, just beat them on Saturday in the Busch races. I’d beat them on Sunday and sat on poles, and I just believed I was a good driver,” Waltrip said. “I think it’s fair to say, I don’t guess I was a great driver, or I would have been able to overcome whatever challenges I had, but I was a really good driver, and I knew that.”

One person who saw his potential was seven-time Cup Series champion Dale Earnhardt.

“I just couldn’t get it worked out on Sundays for some reason,” Waltrip said. “Then along came Dale, and he said, ‘I’m gonna help you out brother, I think you got what it takes, you just need some coaching and some management.’”

Waltrip signed with Dale Earnhardt Inc. to drive the No. 15 NAPA Auto Parts Chevrolet in 2001.

Despite heading into the Daytona 500 with an 0-462 record in Cup Series action, Waltrip was as determined as ever.

“That’s what was so interesting about that Daytona 500. I woke up that morning, and I said, ‘They’re not beating me today. I’m gonna win this race. I’m winning today.’ That was after 462 tries,” Waltrip said. “Along the way, there were a lot of times when I had the fastest car and I felt like I was gonna win, and it just didn’t happen. I’m just thankful that I woke up that morning with so much confidence in myself. That was a good feeling.”

Waltrip’s confidence, along with the teamwork of Dale Earnhardt Jr. and Earnhardt, led to his first triumph. 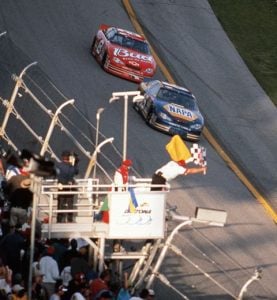 However, the victory was overshadowed by the death of Dale Earnhardt in a crash on the final lap of the race.

As Waltrip reflected on the moment, he felt thankful that Earnhardt saw their plan come to fruition.

“I’m really proud that Dale saw where Dale Jr. and I were headed before he left this world,” Waltrip said. “He put a plan together, he told us we were going to work together. I remember thinking, I looked in the mirror every lap and saying, ‘Did Dale tell Dale Jr. this plan? Because I didn’t talk to him. I don’t know if he did or not.’

“So, just thinking about how proud he must have been of us driving off to win that race.”

With the groundwork that Earnhardt built, DEI strived for more on the superspeedway tracks of Daytona Int’l Speedway and Talladega (Ala.) Superspeedway.

Waltrip, who added a second Daytona 500 in 2003 and a victory at Talladega that season, felt Earnhardt’s vision was the driving force to their success.

“That’s what he instilled in his people. When he was building DEI, and when we lost Dale, I think it just inspired everybody at the shop that had anything to do with the cars or the engines, they said, ‘We got to make them the best, because that’s what Dale expected.’”

The chemistry between Earnhardt Jr. and Waltrip was apparent when it came to drafting on the high banks. Even though their execution was near perfection, Waltrip admitted there wasn’t much preparation that went into each event.

“Dale Jr. and I, we weren’t really friends. There was no strategy like all these team meetings that they have these days, there was none of that,” Waltrip said. “We just would get out there and race and then we’d look around and we’d be running one-two, or in a position to do just that, and just execute it. We respected each other and executed, and it brought us a lot of success on those big tracks.”

When his successful run at DEI concluded, there was a new beginning for Waltrip on the horizon.

Check back for part two — tomorrow.