The Volkswagen Tiguan R is not something you might be expecting CAR magazine to cherish – high-performance SUVs are a fundamentally flawed concept in many ways, and your average, everyday VW Tiguan isn’t exactly one of the most exciting options in the conventional mid-size SUV segment.

However, since buyers’ tastes show no signs of slowing their slathering for taller and chunkier transportation, it is at least heart-warming to know that enthusiastic driving is still be catered for. And if you are in the market for a fast motor with a more challenging centre of gravity, it’s good to know that there are some decent options now. Including this one.

Just how high-performance is the VW Tiguan R?

The Tiguan R is powered by a 316bhp version of VW’s current 2.0-litre turbo petrol engine. With 310lb ft as well it is suitably rapid – 0-62mph takes just 4.9 seconds and top speed is electronically limited to 155mph. 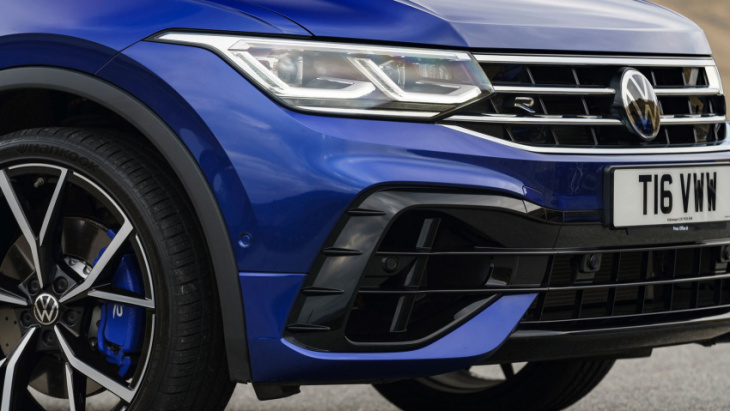 The transmission’s more interesting. Power is sent to all four wheels of the Tiguan R’s wheels via a seven-speed DSG auto, with as much as 50 per cent available at the back. But VW’s ditched the Haldex setup it used previously in favour of a new torque-vectoring rear differential capable of splitting drive between the rear wheels via a pair of clutches.

It’s at its most aggressive in the Sport and R modes, and monitors yaw rate and steering angle as well as accelerator position to determine how much power to send where.

The Tiguan’s R character depends very much on which of its three driving modes you opt for. Sport is the default, and thus it should remain – flip into Comfort and though the ride is undeniably relaxed the gearbox shifts into an Eco mode which saps any enjoyment whatsoever and makes the Tiguan R feel lethargic.

Keep the gearbox in D in Sport mode and you’ll enjoy acceleration when you need it but a gearbox that’s more than happy to cruise in a high gear. 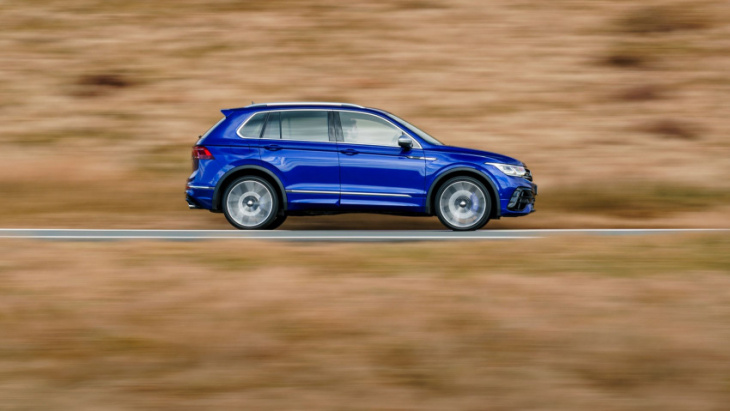 Driving modes can now be selected from a button on the steering wheel, and if you hold down the R button you’ll immediately be put into the most aggressive of the Tiguan’s driving modes: Race.

It’s here you’ll feel the effect of that new rear diff best. The system’s able to send 100 per cent of rear torque to the outside wheel when you’re cornering hard, leading to cornering ability unthinkable in the standard car. It turns in sharply and barely understeers, while the steering is light and pinpoint accurate. 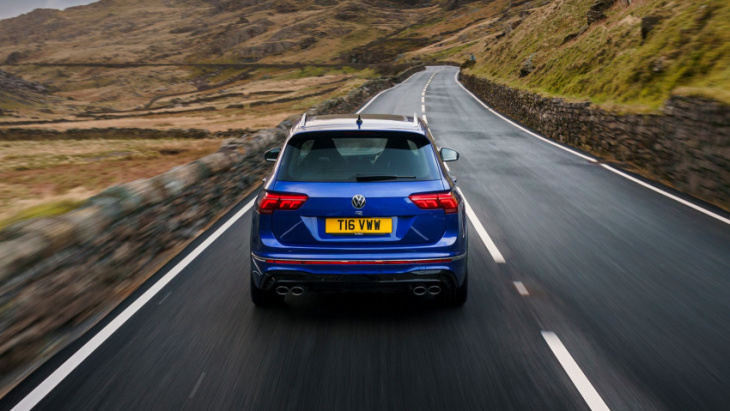 Despite the lowered ride height, 21-inch wheels and firmer dampers, the Tiguan R still rides well, too – comfort levels are more than high enough for this weapon to be used on a daily basis.

Here come the usual moans – it’s not as poised as a smaller, lighter hatchback would be with the same system. It rolls more and leans on its traction control to stop things getting out of hand. It’s rapid, but not especially playful – but that’s been a hallmark of VW R models since the beginning.

An optional Akrapovič exhaust is available. Don’t bother if you don’t want to be antisocial (or add £3200 to the price tag), but you shouldn’t panic too much either as a great deal of the noise in the cabin is artificial. The real thing does sound good, though. 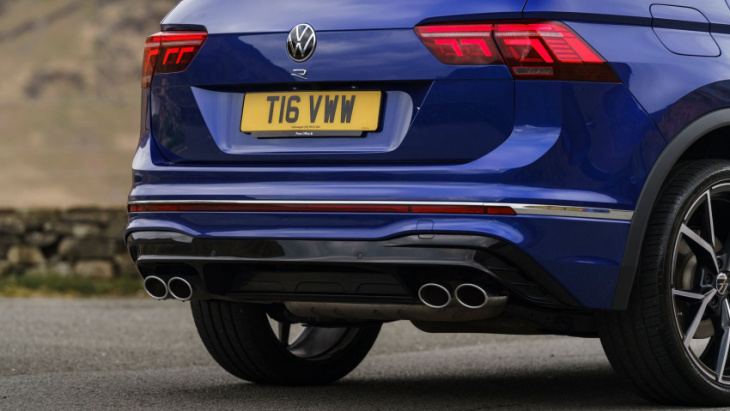 Other improvements are the same as you’ll find across the rest of the facelifted Tiguan range – an infotainment screen that works brilliantly, a touch-sensitive climate control panel and steering wheel that do not. Sorry, VW – physical buttons are easier to use on the move, and all the haptic feedback in the world won’t convince us otherwise.

The basic Tiguan platform remains the same. That means plenty of space – four adults can stretch out in comfort, five at a push, with a 615-litre boot that’ll fit all the flat-pack furniture your heart desires.

The front seats are new, though. They’re single-piece Alcantara and fabric affairs printed in a particularly fetching blue check. Supportive and supremely comfortable, and they’re applied to the Arteon R, too.

Maybe the Tiguan R’s been too long coming, but it’s been given enough thought and executed with the sort of German precision that makes us happy to have waited. No, it’s not as good as a hatchback would be – but as SUVs go it’s a cracker, and we’d be inclined to pick it over the almost-identical Cupra Ateca or the Mercedes-AMG GLB 35.

It’s fun, aggressive when you want it to be and remarkably civilised when you don’t. Cars like this rarely make sense, but the Tiguan R is one case where that argument starts to falter.