VW May Have Shelved Building a Cool New Pickup for America

But the brand has not completely ruled it out. 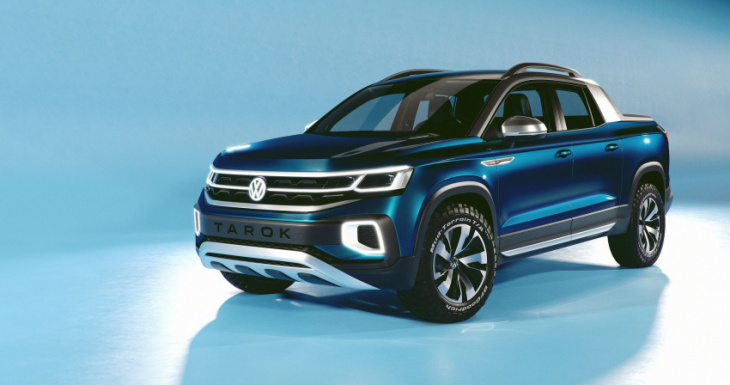 Volkswagen has pivoted its model offerings in America to American tastes. During the past few years, we’ve seen VW ditch its base Golf variants and welcome crossovers like the Taos, Atlas and Atlas Cross Sport. The next rational step — while going full-on ‘Merica — would be to launch a cool new pickup. And VW teased us with the Tarok concept back in 2019. But it does not appear that a Volkswagen-branded pickup is happening — at least this decade.

VW, like many manufacturers, is pivoting hard toward electric vehicles. And the brand’s global head Thomas Schäfer has more or less ruled out VW building an electric pickup based on Scout’s new platform, noting that ” at the moment, our focus on the lineup doesn’t include it” and “we have a clear lineup all the way through the second half of this decade.”

Pablo Di Si, VW’s new North American head, was more equivocal, saying that VW has the “knowledge” to build an electric pickup truck and said VW would “play the game and see where that kind of takes us.”

Where does that leave us on VW getting a pickup in America? It’s ambiguous. We can surmise that a new pickup would need to be electric. The window to launch a new combustion pickup is closing. And VW has said it will skip hybrids and go straight to EVs in America.

American VW dealers would surely want a pickup, though that has been true for some time. And previous VW Group of America CEO Scott Keogh, now heading Scout, called building a new electric truck “the chance of a lifetime.” VW did form Scout to capitalize on that chance. However, forming a new Scout brand may be a way to cut out current VW dealers.

Theoretically, the comments don’t preclude VW from launching a more crossover-like affordable pickup on the current MEB EV platform — think ID.4 but a truck. But that prospect would be some time off with VW launching the ID. Buzz and ID. Aero in the coming years.

Keyword: VW May Have Shelved Building a Cool New Pickup for America