Spy shots have revealed an updated Arteon is coming, but maybe not to the US. 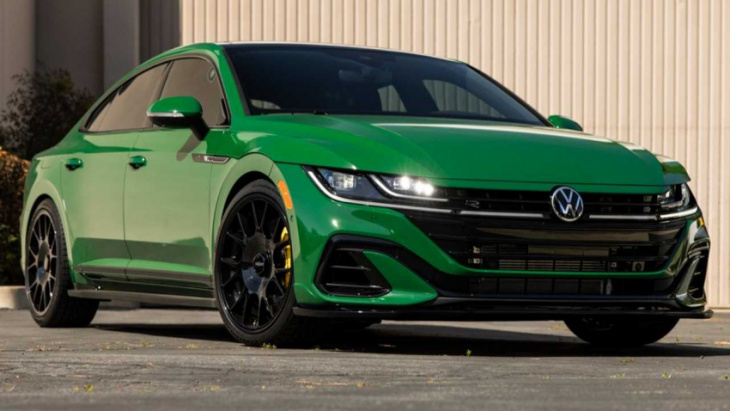 Volkswagen of USA pulled the plug on the aging Passat last year with a Limited Edition serving as the midsize sedan’s swan song. A new report from Automotive News claims the Arteon will also suffer the same fate as early as 2024 when it’ll reportedly be dropped from the lineup. Already confirmed for North America, the ID. Aero – pictured below as a concept car – is expected to indirectly replace the stylish ICE-powered liftback.

It’s worth pointing out that our spies caught a prototype of the Arteon at the end of June featuring a modified interior with a tablet-like infotainment. Much larger and sticking out from the dashboard as it does on the ID. models, the screen came along with a reworked center console featuring different switchgear. The test vehicle in question was the more practical Shooting Brake, which VW sadly isn’t selling in the US.

It’s too early to say whether the prototype portrayed a second-generation Arteon or another update for the existing model, but it looks like the US won’t be getting that car. With rumors stating the Europe-bound, next-generation Passat will come exclusively in wagon guise, perhaps VW wants to keep the Arteon in its lineup as a substitute. It would serve as a fancier alternative to the mechanically related Skoda Superb, which the Czech automaker has already said will be offered both as a liftback and wagon.

As for the ID. Aero, the MEB-based EV was supposed to be shown as a concept in April at the Beijing Motor Show but the event was canceled due to a resurgence in coronavirus cases. Essentially an evolution of the 2018 ID. Vizzion, the car will initially go on sale in China next year before heading to Europe and the United States.

Technical specifications are largely shrouded in mystery, but we do know it has a drag coefficient of only 0.23 and can cover 385 miles (620 kilometers) in the WLTP cycle. VW said the ID. Aero is almost five meters (16 feet) long and comes equipped with 22-inch wheels, at least in concept form.

The production model could go by another name, possibly ID.7, thus slotting above the ID.3, ID.4, ID.5 and China-only ID.6. An ID.8 has been announced as a larger electric SUV about the same size as the Atlas / Teramont. Logic tells us the Aero / ID.7 will also spawn a wagon version in the same vein as the 2019 ID. Space Vizzion concept.

Keyword: VW Arteon To Be Axed In The US In 2024, Replaced By ID. Aero: Report