The plug-in hybrid Volvo V60 Recharge estate came onto the market before its rivals the Audi A4 Avant, BMW 3 Series Touring and Mercedes C-Class estate had their own plug-in versions. Previously known as the V60 T8 Twin Engine, its name later changed, with Volvo’s ‘Recharge’ branding now used on all of its plug-in hybrid and electric models.

Volvo’s T8 engine was very powerful, and there was a performance version above it. But both were discontinued in favour of a ‘T6’ engine with slightly less power. It’s still very quick, and suits the V60 Recharge’s relaxed character very well.

The V60 Recharge T6 consists of a 2.0-litre supercharged and turbocharged petrol engine that drives the front wheels, paired with an electric motor that sends power to the rear wheels. This gives a total output of 345bhp with the car capable of a 0-62mph time of just 5.4 seconds. Perhaps more importantly, however, the V60 Recharge is capable of a range between 31 and 54 miles on electricity alone.

Don’t expect the V60 Recharge to feel as quick as its on-paper performance figures might suggest – it’s not particularly sporty or engaging to drive, but it’s a very competent and sophisticated cruiser. Its high-quality interior is beautifully designed, feels effortlessly upmarket and is a nice place to be, and yet there’s no drop in practicality compared with the conventional petrol and diesel models. 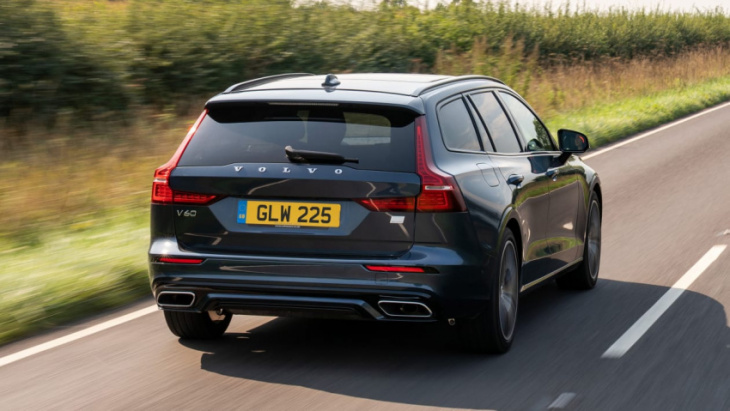 When it was available, the V60 Polestar Engineered T8 offered an impressive 399bhp. Power came from an upgraded version of the same 2.0-litre petrol engine and hybrid powertrain used in the T6. Despite the power, the petrol-based plug-in hybrid powertrain lacked excitement and the car was too heavy to be genuinely engaging to drive when compared to rivals like the Audi S4 Avant.

Like every plug-in hybrid model, the fuel-efficiency you achieve in the V60 Recharge hybrid will depend entirely on how much you drive using battery power. From a full charge, this powertrain can officially cover up to 54 miles in electric mode, so many will be able to carry out daily commutes using barely a drop of petrol. Drive with the battery empty and fuel economy for both models drops to between 35 and 40mpg. Charging the battery takes around 2.5 hours from a home wallbox or around six hours when connected to a three-pin domestic plug socket.

Officially, the V60 Recharge’s hybrid engine returns triple-digit fuel economy of more than 140mpg while emitting CO2 of 18-46g/km. With a fully charged battery, it can manage a distance of between 31 to 54 miles using electric power only.

When it was on sale, the more powerful Polestar Engineered T8 version offered fuel economy of up to 134.3mpg and CO2 emissions of 48-56g/km. It was capable of a pure-electric range of up to 37 miles on a full charge.

Thanks to its low emissions figures, the V60 Recharge qualifies for a low Benefit-in-Kind banding for company-car drivers.

You'll pay the discounted VED (road tax) rate from the second year onwards but due to the V60 Recharge costing well in excess of £40,000, the additional annual surcharge is also due the first five times you renew.

Not only is the V60 Recharge T6 the greenest model in the V60 lineup, it’s also the fastest. The 2.0-litre turbocharged and supercharged petrol engine sends power to the front wheels via an eight-speed automatic gearbox, with an electric motor driving the rear wheels, giving it four-wheel drive for excellent traction. In total, the powertrain produces 345bhp, putting it close to fast estate rivals like the BMW M340i xDrive Touring and the Audi S4 Avant. 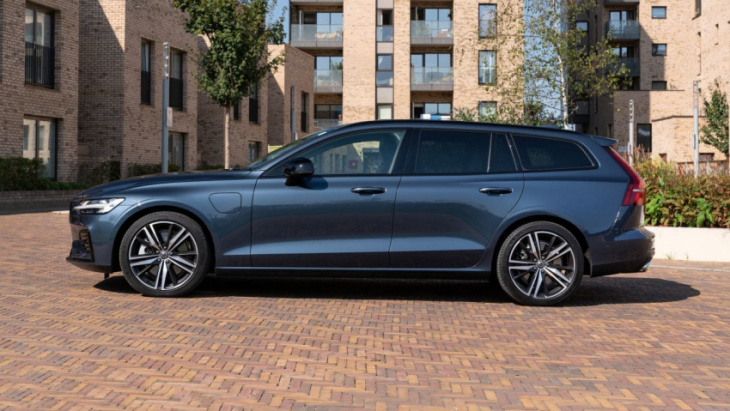 It combines to give the V60 Recharge impressive performance too, propelling it from 0-62mph in just 5.4 seconds in its hottest 'Power' driving mode. It's very different to the all-electric 'Pure' mode the car defaults into when you first start it, which sees the car glide away silently when you first press the accelerator. Push on harder and the petrol engine springs to life, with 'Hybrid' seeing the two motors juggle power seamlessly.

At the higher speeds you'll do on the motorway, the petrol engine is doing most of the work, and while it doesn't sound very exciting there is potent performance available. However, even with the supercharger, turbocharger, petrol engine and electric motor all contributing in 'Power' mode, the V60 Recharge never feels quite as fast as its stats suggest.

For even more performance, the now discontinued Polestar Engineered T8 used a tweaked version of the same 2.0-litre turbocharged and supercharged engine, increasing power to 399bhp. This made it slightly quicker off the line than the standard V60 Recharge, with 0-62mph taking 4.6 seconds. It also received a number of upgraded parts, including larger Brembo brakes and Ohlins adjustable suspension dampers that helped sharpen up the car’s responses. The result, however, was a car that was too stiff and hardcore for what was meant to be a comfortable family estate.

Volvo has mastered the cool and calming interior

The Volvo V60 Recharge majors in comfort but there was a noticeable stiffness in the suspension of the R-Design version we tried, which could be down to its sportier setup and the extra weight of its plug-in hybrid technology. Still, it wasn't crashy and an Audi A4 S line with sport suspension is harder still. 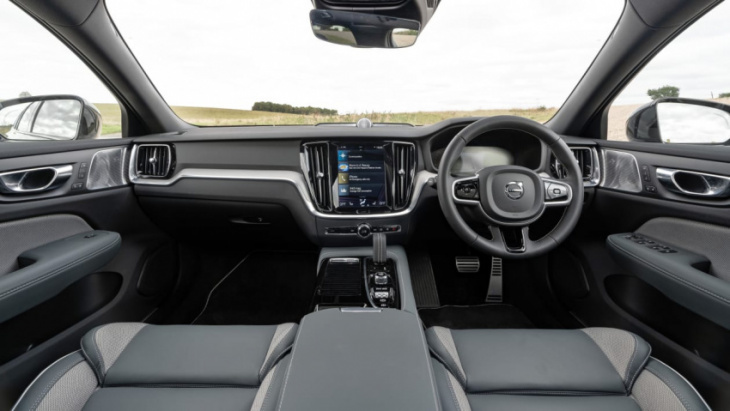 We're already big fans of the V60's interior, and that remains the case with the Recharge hybrid. It has fancy features like an Orrefors crystal gear selector that adds character. The dashboard is entirely digital, with a crystal clear instrument screen and nine-inch touchscreen in the centre of the dashboard with an intuitive user interface.

Buyers can spec the V60 Recharge in two trim levels. The luxury-focused Inscription and sporty R-design models have been replaced with Volvo’s new Plus and Ultimate trims, while the more basic Core trim level is only available on the non-hybrid V60.

Plus features sat nav, keyless entry, a powered tailgate and 19-inch five-triple spoke alloy wheels. It’s available in a ‘Dark’ theme, with gloss black exterior trim pieces or a ‘Bright’ theme with chrome and silver exterior trim pieces. The Ultimate trim includes all Plus features as well as extras such as a 360 parking camera, Driving Assistance pack (including Volvo’s Pilot Assist and Adaptive Cruise Control), a panoramic sunroof and premium sound-system.

A plug-in hybrid without compromises

Sit the latest V60 and its predecessor next to one another, and you'll see Volvo has gone back to its traditional boxy design language without making it look dowdy. This has paid dividends inside, where there's loads of space for tall adults to sit comfortably. Our only gripes are limited foot room under the front seats and a large transmission tunnel that impedes comfort for a middle back seat passenger. 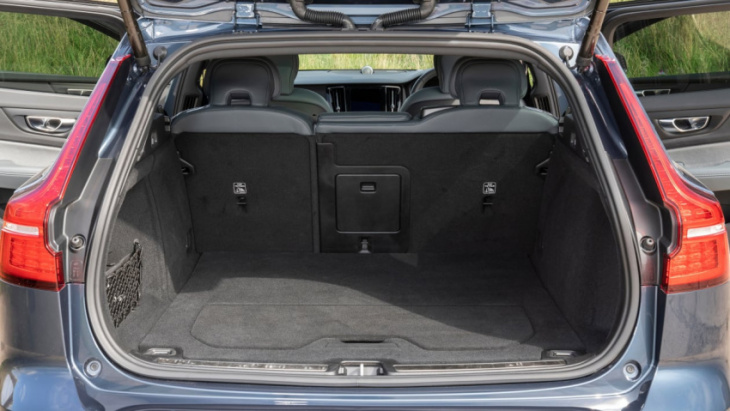 Impressively, Volvo has also managed to keep just as much boot space in the V60 Recharge by positioning the electric motor under the middle of the car. So you get 529 litres behind the rear seats, beating the Audi A4 Avant and BMW 3 Series Touring.

In our 2022 Driver Power owner survey, Volvo finished eighth out of 29 manufacturers, which is an improvement on its ninth-place standing in 2021. However, the brand’s famous reputation for reliability has taken a hit in recent years, with 27.7% of owners telling us they'd experienced a fault within the first 12 months this year. 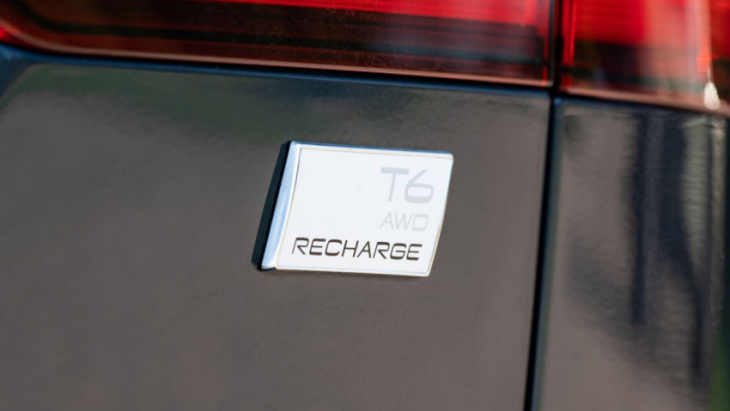 Volvo has a long history of pioneering safety technology, and its cars are still amongst the very safest on the road. It easily achieved a five-star rating from Euro NCAP thanks to its strong design and active technology like City Safety, automatically braking or helping you steer around a vehicle, pedestrian, cyclist or large animal that's detected in your path.