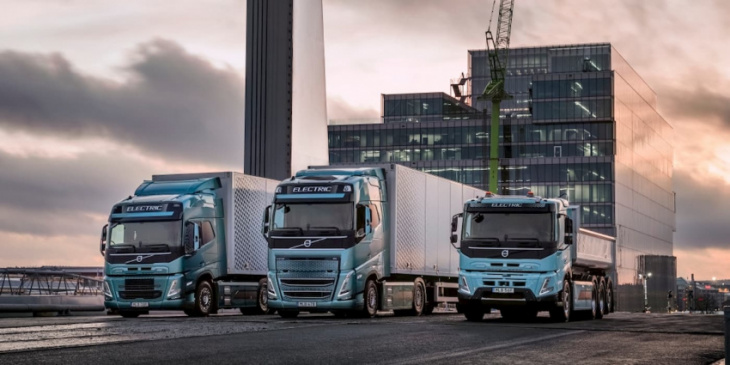 Volvo Trucks hit another milestone Wednesday, as the heavy-duty truck maker announced its massive 44-ton electric trucks are hitting the production line. With the addition of three of its heaviest electric truck models, Volvo now has a six heavy-duty EV lineup – the largest in the industry.

Volvo Trucks is leading the charge for sustainable solutions in some of the biggest commercial trucks around us.

Behind passenger vehicles, heavy and medium-duty trucks contribute the most greenhouse gases in the transportation sector. According to recent EU data, heavy-duty vehicles contribute about 25% of total transportation emissions. Not only that, but the figure is expected to continue rising if nothing is done.

Volvo Trucks, which is not affiliated with the automaker Volvo, is one of the world’s largest truck-makers (they also make buses and construction equipment), with customers in over 130 countries.

More importantly, Volvo is driving the transportation sector towards a cleaner, sustainable future with its electric trucks.

It first started with the Volvo FL Electric and the Volvo FE Electric in 2019, and then the Volvo VNR Electric was introduced to North America in 2020. Last year, Volvo Trucks accelerated its efforts as its medium and heavy-duty models started rolling out across Europe and North America.

And more recently, Volvo Trucks announced plans for a large-scale battery factory in Sweden to accelerate its electrification efforts.

Now, three new Volvo Trucks are ready to roll out – the Volvo FH, Volvo FM, and Volvo FMX – some of the truck makers’ heaviest models.

Converting the heaviest commercial vehicles to electric has been a challenge thus far, but Volvo Trucks is about to change that with its new heavy-duty EV lineup.

This is a milestone and proves that we are leading the transformation of the industry. It’s less than two years ago since we showcased our heavy electric trucks for the very first time. Now we are ramping up volumes and will deliver these great trucks to customers all over Europe.

The demand for electric trucks is rapidly increasing in many markets, with one driving force being the need for transport buyers to shift to fossil-free transports in order to meet their sustainability goals. Volvo Trucks’ electric portfolio could cover around 45% of all goods transported in Europe today.

The truck maker says production is set to begin in its Tuve factory in Sweden, and then in 2023, it will start at its Belgium plant.

Volvo Trucks has sold about 1,000 heavy-duty electric trucks and over 2,600 overall. In addition, it believes as businesses look to achieve their climate goals, demand will continue building.

Most of the largest global trucking companies have set aggressive climate goals as policymakers enforce strict regulations. For example, in March, the EPA proposed higher industry standards to “significantly” reduce emissions in heavy-duty trucks beginning in 2027.

The electric trucks will be built on the same production line as their traditional models. That being said, Volvo Trucks aims for 50% of its vehicle deliveries to be electric by 2030.