The new Volvo EX90 comes as the company’s plans to reveal one new fully electric car each year.

Volvo has also committed to sell only fully electric cars by 2030, as part of the company’s ambition to be a climate-neutral company by 2040.

The Volvo EX90 was revealed earlier this month and will be built in the USA starting next year and later also in China. By then, Volvo aims for those two production facilities to be climate-neutral.

The Volvo EX90 is described as a stylish family car with modern proportions, combined with cutting-edge technology in core computing, connectivity and electrification to optimise safety, efficiency and aesthetics.

Jim Rowan, Volvo’s Chief Executive said:“The Volvo EX90 is a statement for where we are, and where we are going. It’s fully electric with a range of up to 600 kilometres on a single charge, designed to further raise our safety standards, the first Volvo car to be truly defined by its software and part of a wider ecosystem, connecting to your home and your other devices. The Volvo EX90 is the start of something new for Volvo Cars in many ways.”

Volvo has confirmed that the standard of safety in the Volvo EX90 is also higher than any Volvo car before it.

The vehicle has an invisible shield of safety enabled by our latest sensing technology, inside and outside. Sensors such as cameras, radars and lidar are connected to the car’s high-performance core computers, where NVIDIA DRIVE runs Volvo Cars’ in-house software to create a real-time, 360-degree view. 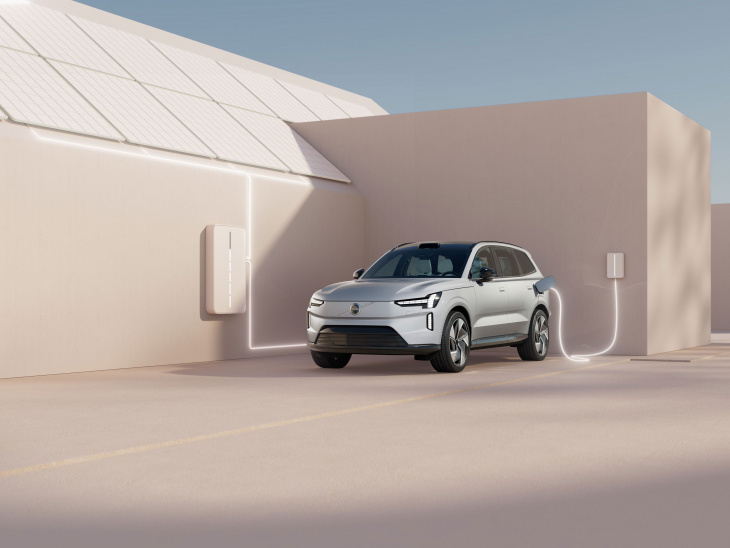 Volvo’s lidar, delivered by Luminar, can sense the road ahead, whether it’s day or night, also at highway speeds. It can see small objects hundreds of metres ahead, creating more time to inform, act and avoid. The sensors are also said to improve the reliability and overall performance of Volvo’s assisted driving function Pilot Assist, with a new steering support while changing lanes.

Due to the sensor set including lidar, the Volvo EX90 is the first Volvo that’s hardware-ready for unsupervised driving in the future.

Volvo describe the Volvo EX90 as being like a highly advanced computer on wheels.

How can the EX90 support a more sustainable lifestyle?

The Volvo EX90 can deliver up to 373 miles (600 kilometres) of tailpipe-emission-free driving range on a single charge, according to the WLTP test cycle, it charges from 10 to 80 per cent battery capacity in under 30 minutes.

The initially available twin-motor all-wheel-drive version is powered by a 111kWh battery and two permanent magnet electric motors together delivering in its performance version 380kW (517hp) and 910Nm of torque.

From news to politics, travel to sport, culture to climate – The Independent has a host of free newsletters to suit your interests. To find the stories you want to read, and more, in your inbox, click here.