From the October 2022 issue of Car and Driver.

What to do in a long, cold Swedish winter after the glow of winning the 2017 FIA World Touring Car Cup championship has worn off but before the next season starts? Some might dog-sled under the northern lights or plot that year’s Gävle Goat arson, but the Cyan Racing team in Mölndal, Sweden, had a different plan for offseason entertainment: rewriting history. What if the classic Volvo P1800 had the performance to match its design? The folks at Cyan (formerly Polestar Performance before Volvo bought the name) were just the ones to take on the task of making a P1800 as fast as it is pretty. The work took more than three years, but Cyan eventually introduced its finished product amid a pandemic. Now the P1800 Cyan has finally made it to the States. So we took it to our desert proving grounds to get the numbers. Skål!

Volvo built the original P1800 from 1961 through 1973, with few cosmetic changes during its run. Any year of the classic coupe can form the basis of Cyan’s P1800. “Because so little of the original car is used, we can start out with a donor car beyond what would normally be seen as restorable,” says Hans Bååth, Cyan Racing general manager.

Cyan strips and sandblasts the donor car, then replaces all exterior body panels with carbon fiber. Only a small portion of the original’s chassis and transmission tunnel remains. Every surface has been lightly tweaked from stock. The whole car looks smoother and lower. The cabin is set back, or rather the wheel wells are moved forward, the hood elongated, and the rear fenders shortened for less overhang and a leaner stance.

The final product weighs 2424 pounds (a new P1800S weighed about 2320 pounds), with only 47.8 percent of that mass on its front axle—perfect for drifting in Gothenburg or, as we did, going on a brisk 200-mile journey over the California mountains in search of Swedish pancakes. 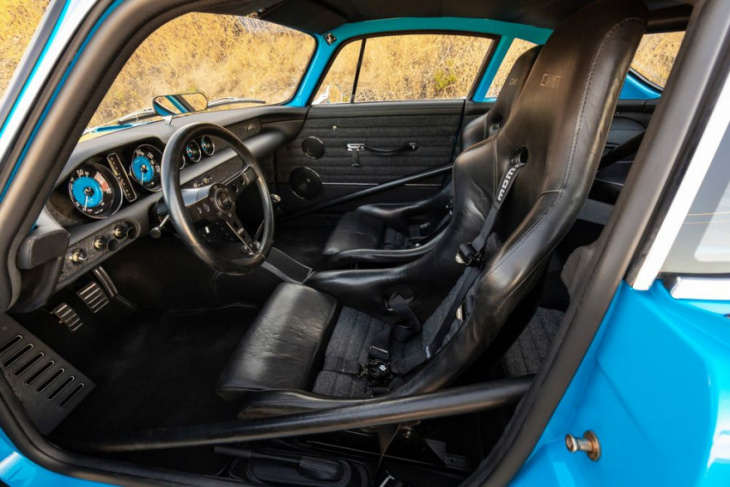 The optional roll cage is titanium. It’s fairly unobtrusive unless you need to pull the hand brake, which is tucked against the lower bar. Racing buckets look snazzy with a five-point harness but are available with more padding if you enjoy being comfortable.

Reflecting the understated design Scandinavia is famous for, the P1800 Cyan’s interior is soft gray felt and black leather. A beautifully modernized gauge cluster appears vintage, and the radio is Bluetooth compatible, so you can cue up ABBA songs. 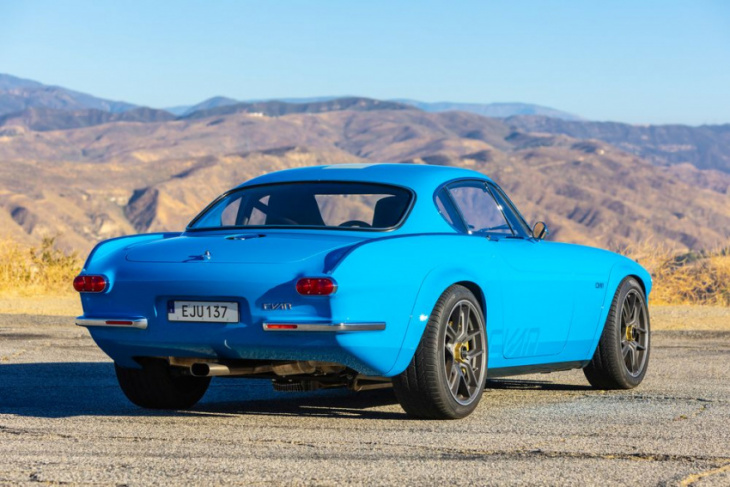 With most modern powerplants hidden under plastic covers, one doesn’t expect beauty when popping the hood anymore. This makes the Cyan’s elegantly displayed turbocharged 2.0-liter that much more stunning. Based on the race engine from the Volvo S60 TC1 car, it makes 420 horsepower and 336 pound-feet of torque. An Inconel header tucks neatly below the block, and a low-mass titanium-aluminide turbine wheel spins up quickly on ceramic ball bearings. Peak boost pressure is 24.7 psi. The transmission is a Holinger five-speed, and the slim shifter works with the sweet click of a money-filled briefcase being opened in a backroom. 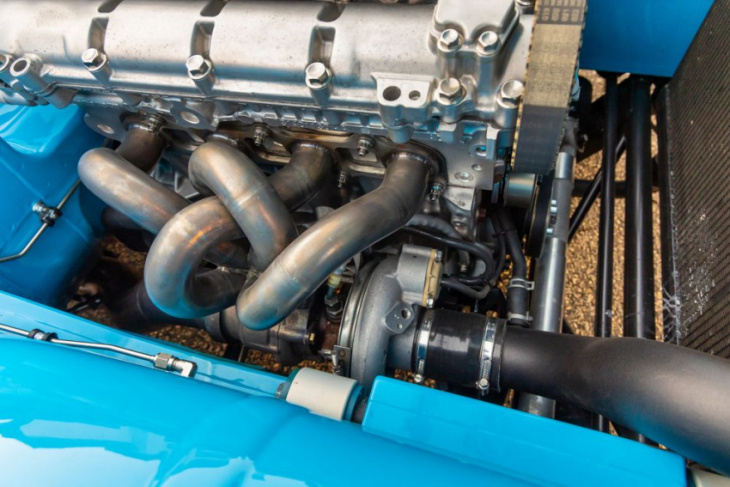 The P1800 body might be classic, but in updating it, Cyan turned to the latest design software to do 3-D modeling and printing. The team also engineered the chassis geometry in-house with the same simulation programs it uses for its winning race cars.

Cyan reinforces the unibody with steel and carbon fiber. The adjustable suspension, with unequal-length control arms front and rear, is Cyan’s own design. Custom Öhlins dampers, adjustable for compression and rebound, provide a surprisingly smooth ride. Goodbye, live rear axle; the rear wheels move independently of each other and receive torque through a carbon-fiber driveshaft hooked to a Holinger limited-slip differential packed with Cyan’s custom gearset. Tubular anti-roll bars help the Cyan corner flat (unlike Roger Moore’s white P1800 in The Saint). 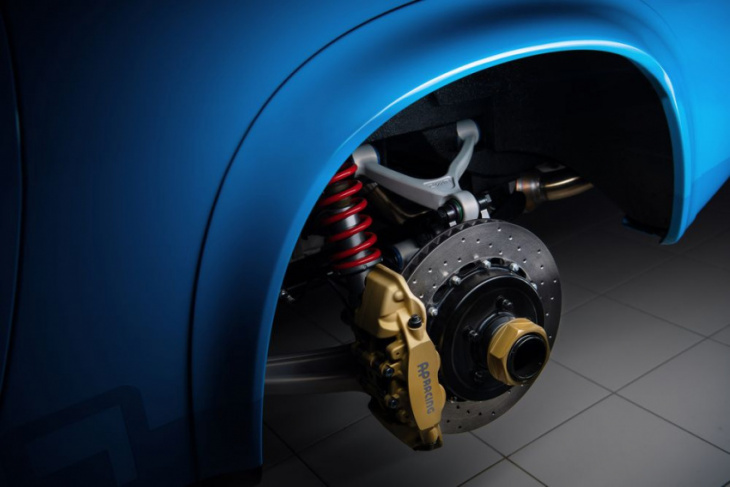 Electrically assisted rack-and-pinion steering efforts are pinkie-out light. Braking gets no power assist, but AP Racing four-piston calipers all around easily bring the lightweight Swedish steed to a stop. Eighteen-inch forged alloy wheels are wrapped with Pirelli P Zeros, 245/40R-18 front and 265/35R-18 at the rear. The open-spoked design ruins any chance at sleeperdom, but Cyan customizes anything, so you could opt for stock ’64 hubcaps. 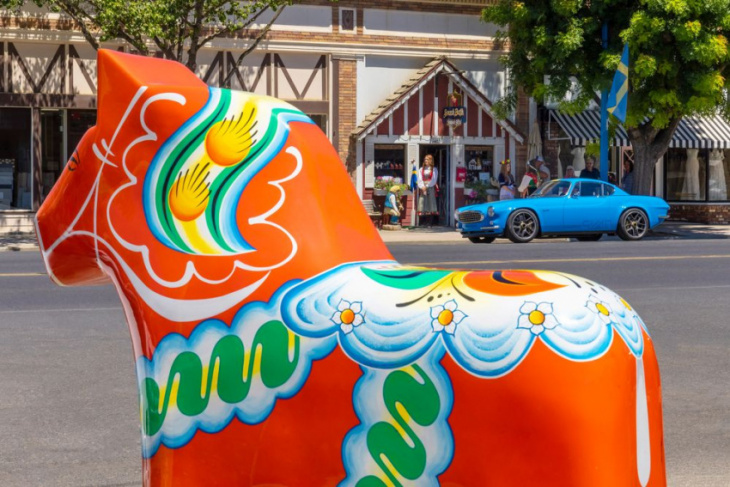 The road to Sweden climbs the Tehachapi Mountains and crosses the dry, golden plains of California’s Central Valley. Just south of Fresno, on Highway 99, a sign painted with a red Dala horse appears before the freeway exit. “Välkommen to Kingsburg,” it says. 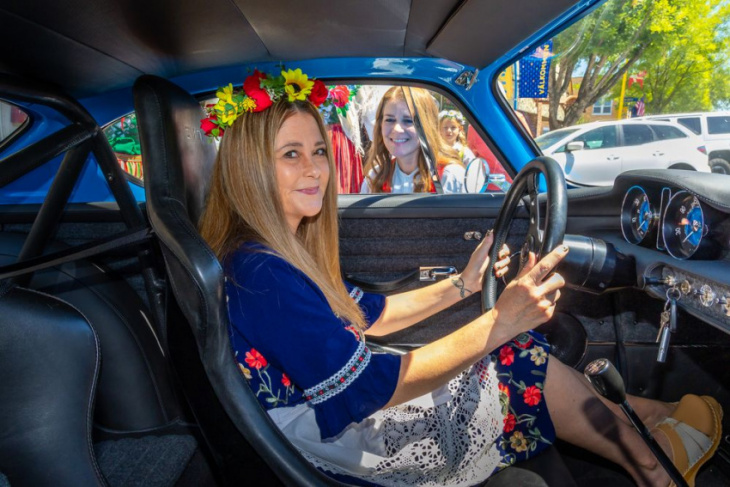 Established as a rail stop in the late 19th century, Kingsburg developed into a farming town with the state’s largest population of Swedish immigrants by the 1920s. In the 1960s, as freeway expansion sent travelers speeding past small towns, Kingsburg decided to try to capitalize on its heritage by highlighting Swedish architecture and holding themed festivals.

This was the perfect destination for a Volvo painted in the colors of the Swedish flag, and the desert and mountain journey was a good test of the P1800 Cyan’s comfort, performance, and air conditioning. The car made the long drive without a hiccup and received a hero’s welcome in town. Even Mayor Laura North showed up in traditional attire to greet us. We ate Swedish pancakes at Kady’s Country Kitchen, and Cyan’s Hans Bååth gave them his seal of approval: “My own grandmother couldn’t do better.”