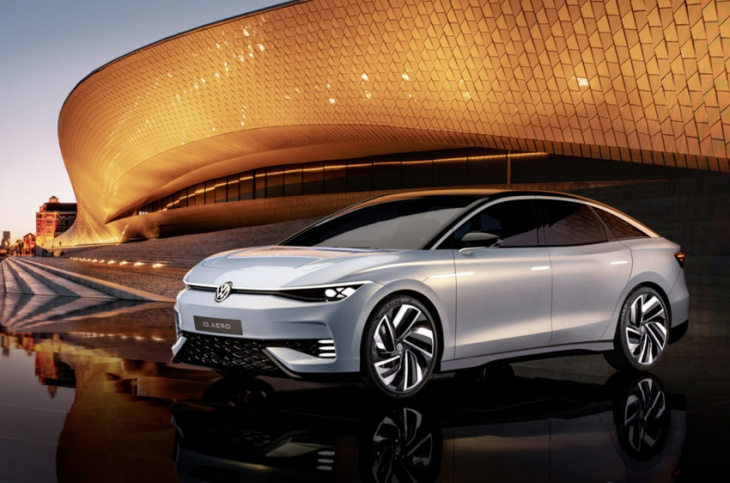 After releasing sketches of a new model in its BEV (battery electric vehicle) ID. range, Volkswagen has now issued the first pictures of the concept car that will be the basis of the flagship of the range. To be known as the ID. AERO, it will be the sixth member of the ID. family, after the ID.3, ID.4, ID.5 and 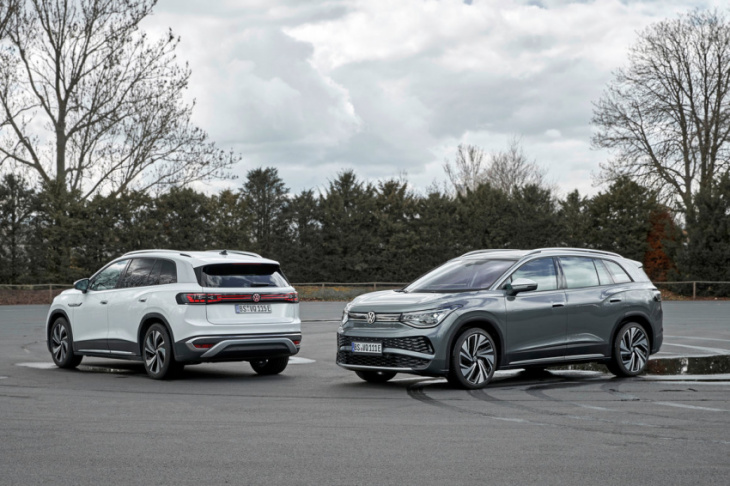 as well as the iconic ID. Buzz.

The future model will be positioned in the premium midsize sedan segment and offered worldwide as the brand’s first global BEV sedan. the production version for China, a very important market for  Volkswagen, is expected to go on sale in the second half of 2023. The European and global version will be made in Germany from 2023. 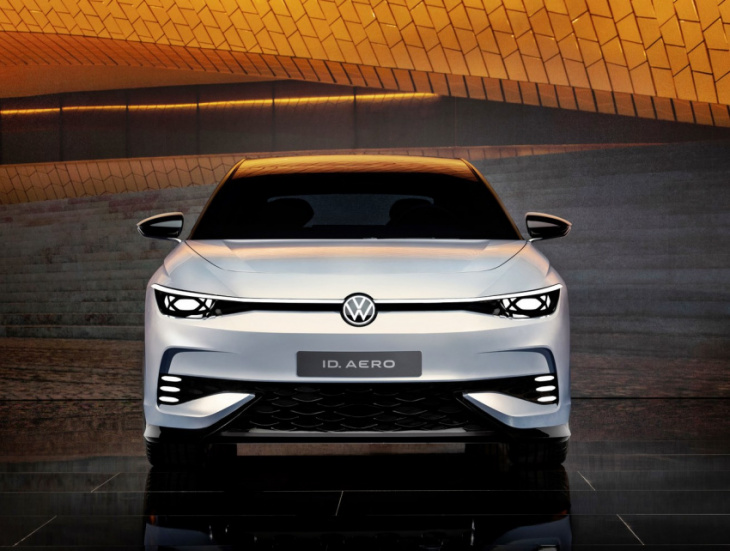 Two versions are planned for the world’s largest car market – one for each Volkswagen joint venture. Based on its regional strategy, Volkswagen is aiming to become the leading supplier of sustainable vehicles in China. As early as 2030, it is planned that at least every second vehicle sold in China will be an electric vehicle. 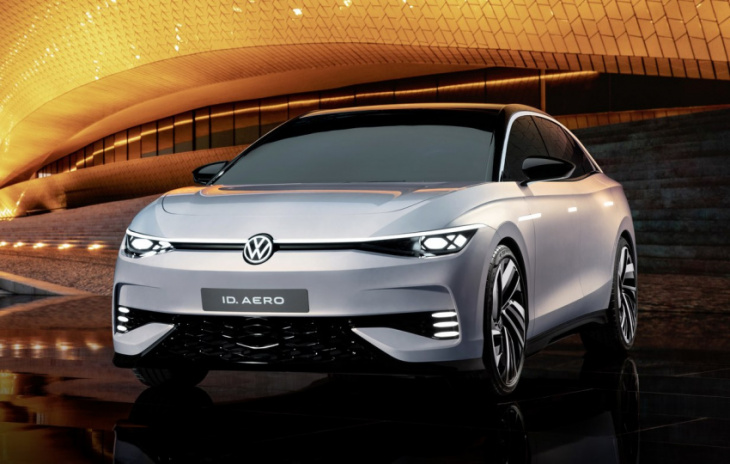 Elegant design characterised by aerodynamics
The concept car is almost 5 metres long and its design is greatly influenced by aerodynamic principles. The roof slopes elegantly to the rear in coupe style and contributes to achieving a very low drag coefficient of 0.23 Cd.

Stylistically, the ID. AERO transfers the design of the ID. family to a sedan in the premium midsize segment for the first time. The aerodynamically designed front end and roof ensure that air flows optimally over the vehicle. The airflow is calmed by the slightly drawn-in rear end with a separation edge. 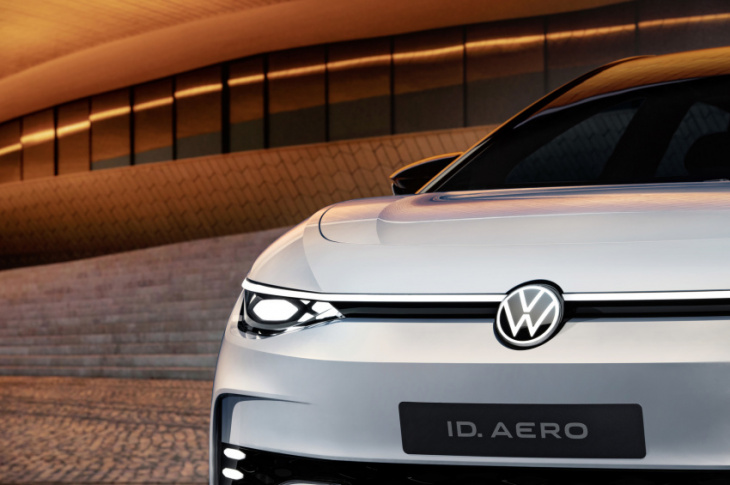 The front end is characterised by the ID. honeycombs typical for the ID. family. The front is horizontally split into two in the bumper and is a defining style element for the ID. AERO design. As another distinctive feature that makes the ID. AERO stand out in the crowd, a narrow light strip extends horizontally across the front out to the left and right of the illuminated Volkswagen badge and above the IQ.LIGHT LED matrix headlights, wrapping into the wings and side panels.

This light strip is continued visually to the rear end with a few interruptions. The dominant rear end features a striking dark light strip and LED taillight clusters with honeycomb structure that create an exclusive look. 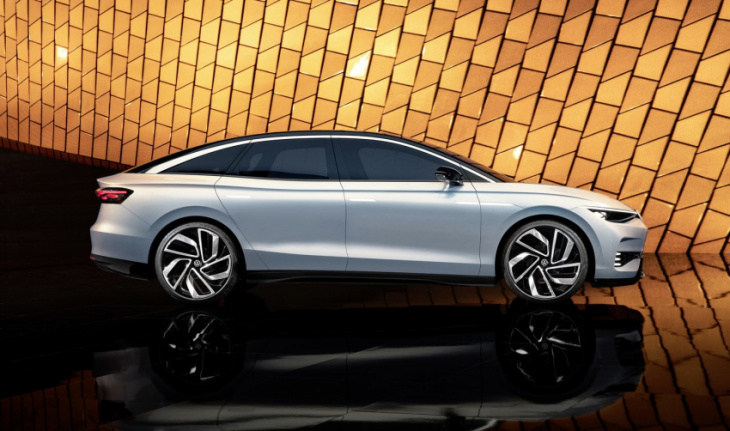 The sporty 22-inch two-tone wheels are designed in the style of a turbine and are integrated flush into the wheel housings. Classic door handles are replaced by illuminated touch surfaces, which reduce the drag even further.

At the top of the silhouette, the bold tornado line and downward sloping roof line shape the design. The powerful shoulder section of the ID. AERO is located above the tornado line. The contour lines make the electric sedan appear flatter and give it a dynamic look.

Modular Electric Drive Matrix (MEB)
Volkswagen’s modular electric drive matrix (MEB) permits short overhangs, a long wheelbase and an exceptionally spacious vehicle interior. The ID. AERO will have a powerful lithium-ion battery with a net energy content of 77 kWh. Thanks to the interaction of the efficient drive system and the excellent aerodynamic properties, the carmaker claims that ranges of up to 620 kms will be possible. 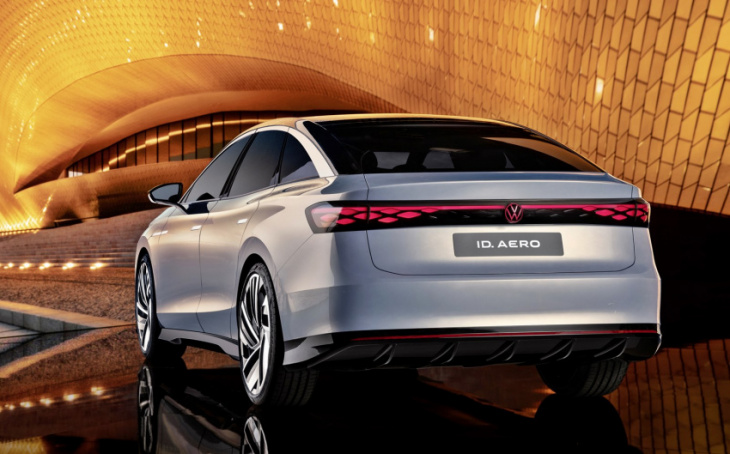 “With the ID. AERO showcar, we are revealing a preview of the next member of the ID. family. A car with an emotional and at the same time extremely aerodynamic design, a range of over 600 kms, an extraordinary amount of space and a premium interior,” said Ralf Brandstatter, CEO of Volkswagen Passenger Cars. “With our ACCELERATE strategy, we are intensively driving forward the electrification of our model range. Following the ID.4, this model will be our next global car for Europe, China and the USA. ” 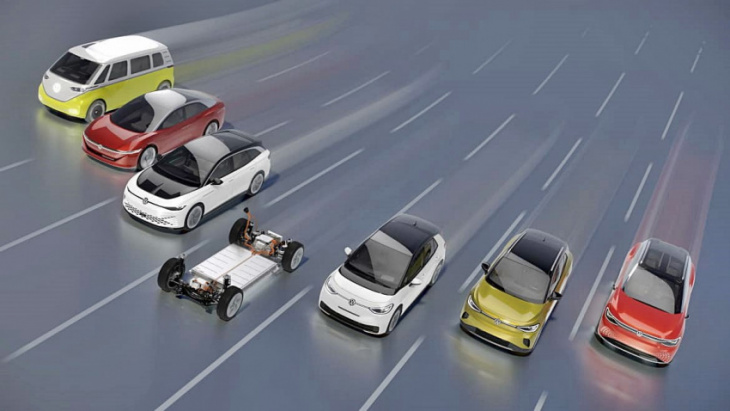 The ID. family is Volkswagen’s range of the future with all battery-electric models using the MEB platform.

jwplayer-thumbnail-2895337.jpg Volkswagen Norway has revealed a five-wheeled driveable office chair prototype. The product, which is yet to be named, resembles a gaming chair and uses the same technology as the company’s electric vehicles. Designed by Volkswagen Norway’s Commercial Vehicles department, the chair is intended to feel like the user ...