You read the headline correctly. Volkswagen has unveiled a bespoke new electric vehicle that would make any staff member the envy of every colleague in their office building.

The team at Volkswagen’s commercial vehicle division in Norway has designed and built the one-off electric office chair and equipped it with a host of features you’d expect to find in its latest battery-powered cars. 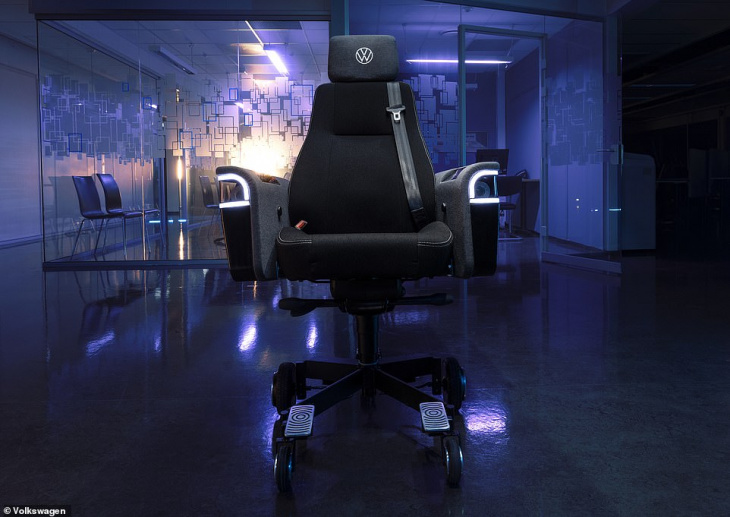 Volkswagen’s latest electric vehicle might not be what you were expecting: VW’s commercial vehicles division in Norway has created a one-off battery-powered office chair that has a range of 7.5 miles and can hit 12.4mph

The electrified office chair is a one-of-a-kind creation, so you won’t see a worker buzzing through the town centre on the morning coffee run anytime soon.

VW said it took ‘months of tedious work and testing’ to create – which does make you wonder how much time it is dedicating to developing battery-powered vans that businesses can use in the future.

But the vehicle isn’t supposed to be serious. Instead, it’s a tongue-in-cheek project that’s more about showing how much electric car tech can be crammed into a tiny package, like a piece of furniture.

VW says the 7.5-mile range is enough for office workers to ‘breeze to and from both coffee machines and meetings throughout the day’ and the 12.4mph top speed would help users be ‘first in line for lunch’ at their workplace canteen.

It features a tiny battery, which is removable for charging purposes.

The main control panel to make the chair move is on the right armrest, which has a full suite of switches to adjust a variety of other features you’d expect to find in an EV sold in the brand’s showrooms today. 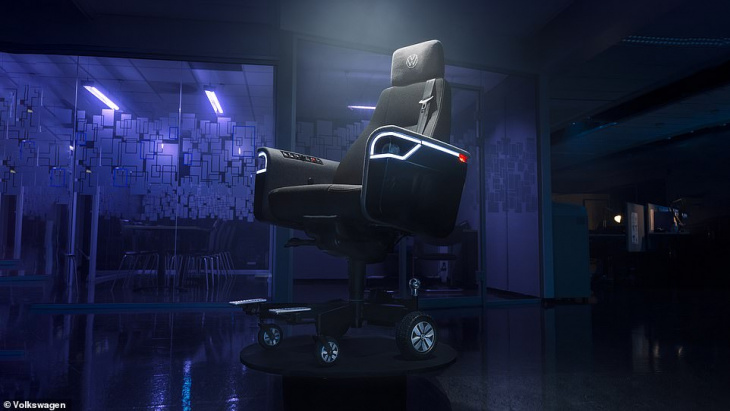 VW says the 7.5-mile range is enough for office workers to ‘breeze to and from both coffee machines and meetings throughout the day’ and the 12.4mph top speed would help users be ‘first in line for lunch’ at their workplace canteen 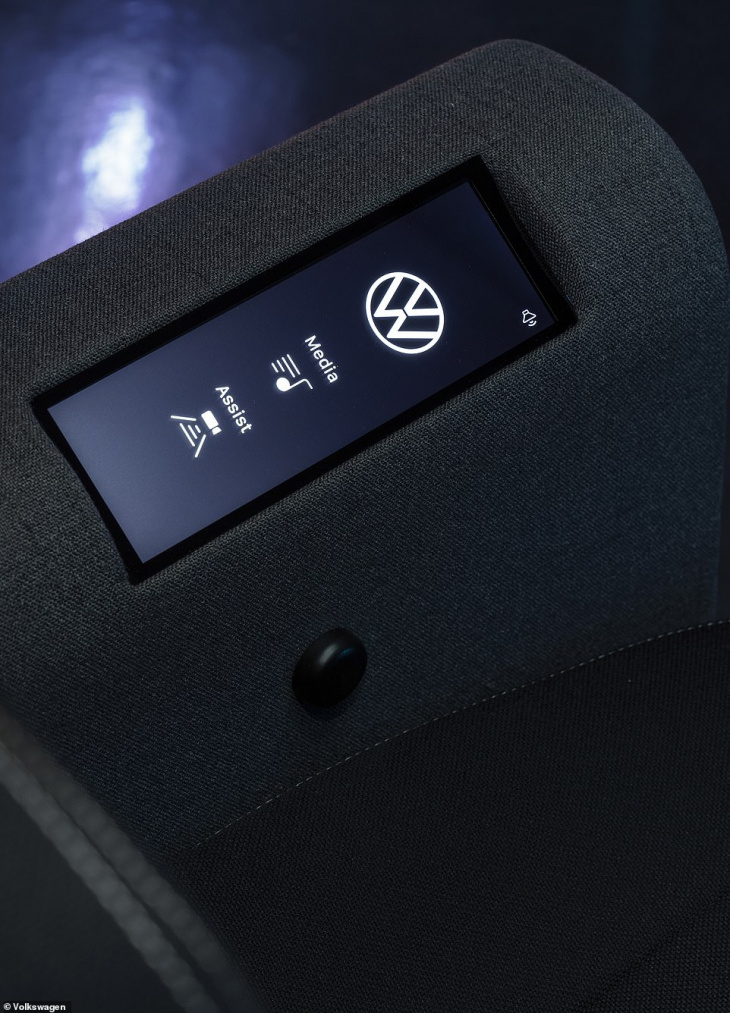 The right armrest has the control panel for the steering, accelerating and reversing, as well as the switches for the LED lights and horn. The left armrest (pictured) has a full-colour touchscreen that doubles as the rear-view camera view

This includes LED headlights built into the front of the arm rests and brake lights towards the rear, a number of driver assistance systems and even speakers so you can play music at your desk.

The lights can be used for additional illumination if you’re working in the office late into the night, but also double as multi-colour disco lights that will make you the life and soul of any work Christmas party.

The technicians fitted the chair with a rear camera, with the touchscreen infotainment display located in the left armrest providing a view of what’s behind the seated occupant.

It even 360-degree parking sensors so you can manoeuvre into tight spaces – and so that you don’t run over the boss’ feet.

There’s a horn too, just in case you’re running late for a meeting and need to notify other employees that you’re extracting the full 12.4mph of speed while taking a blind corner at the water fountain. 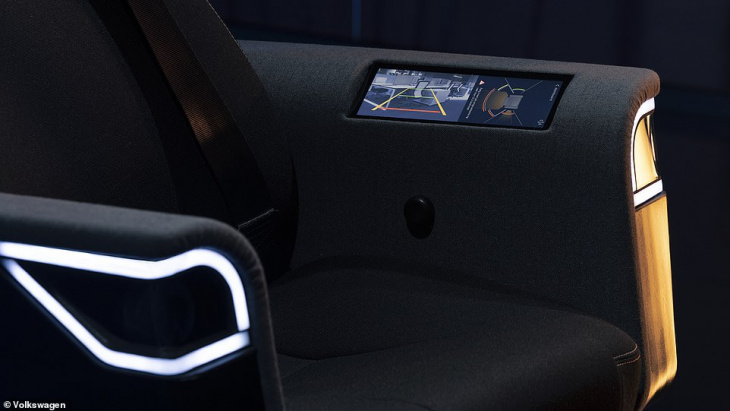 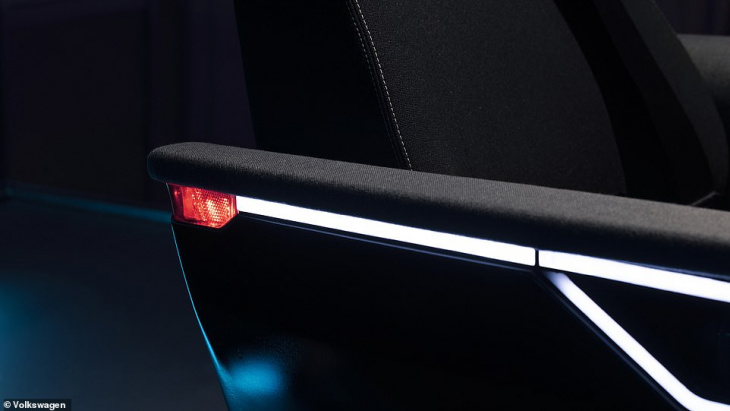 The LED lights run from the front to back of the armrests. They also double as disco lights if you want to be the centre of attention at the office Christmas party

As with most electric Volkswagen cars on sale, the seat itself is heated and embossed with the VW logo.

For the highest possible stability and cornering control, there are five wheels, all of which are designed to replica alloy rims on a full-size car – though these are just four-inch aluminium hoops.

Power is sent to only two of the five wheels.

The team fitted a small panel – or ‘boot’ – at the back and added the capacity to tow a trailer full of documents, post and brimmed tea mugs. 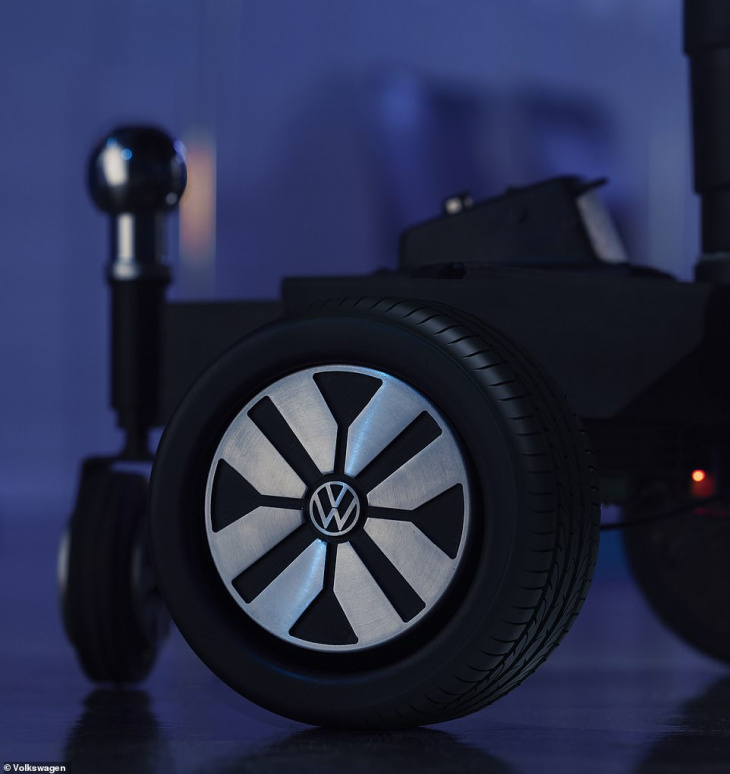 Power is sent to only two of the five wheels. The 4-inch rums are designed to replica alloys on a full-size Volkswagen electric car, like the ID.3 hatchback and ID.Buzz van 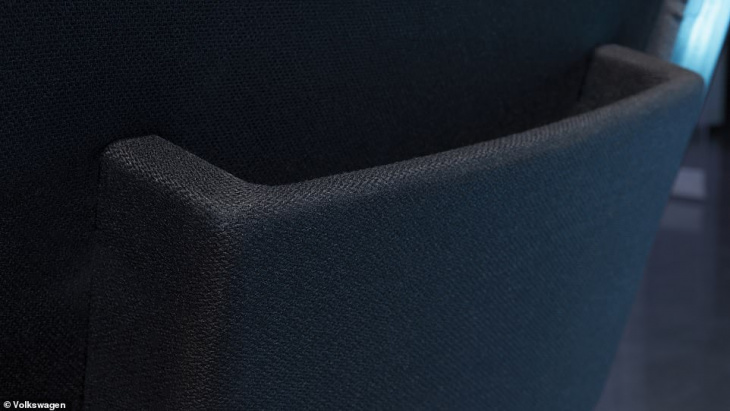 The team fitted a small panel – or ‘trunk’ – at the back so that office workers can carry their laptops, notepads and documents safely

‘The chair even features a practical trunk in the back with 0.005 m3 of space,’ the official statement from VW says.

This is ‘perfect for things like a laptop, quarterly reports, and other documents relevant to an office job,’ it goes on.

‘More documents than the trunk can handle? No problem – the trailer hitch enables workers to drag them all around the office with ease.’

While Volkswagen Norway reiterates that this won’t ever go into production, it is offering a limited number of test drive opportunities to people in the country at varying locations in the coming months.

If employers want to find a way to convince their staff to ditch working from home for good, this might be it!