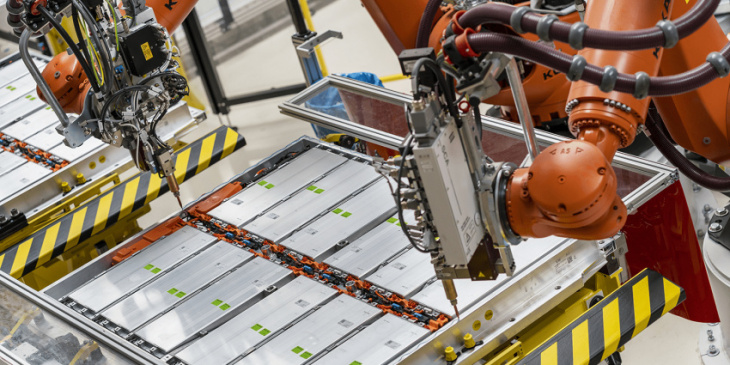 Chinese equipment supplier LEAD announced a major deal with Volkswagen to deliver lithium battery manufacturing equipment. In a first step, LEAD and Volkswagen agreed to supply battery production equipment for a capacity of 20 GWh in Salzgitter but the company claims the cooperation would go further.

Volkswagen plans to install six battery cell factories totalling a capacity of 240 GWh. In addition to Salzgitter, Germany, and Skelleftea at Northvolt in Sweden, Sagunt near Valencia is the third confirmed location for a battery factory of the VW Group. The equipment VW has already ordered from LEAD – whose full name is Wuxi Lead Intelligent Equipment Co., Ltd – will be equivalent to 65 per cent of all the equipment at the Salzgitter factory, says the Chinese company. LEAD does not provide details on the financial scope of the deal. Still, LEAD says it will become Volkswagen’s core supplier across all gigafactories by 2030.

This covers the entire range of cell production. LEAD also offers equipment for other areas, such as slurry mixing or high-speed laser notching machines – but does not mention these when announcing the VW order. The Chinese supplier’s cell assembly systems can be ordered in variants for large cylindrical cell formats or for prismatic or pouch cells. VW will have opted for the prismatic cell because the VW standardised cell relies on this design.

In its statement, LEAD emphasises Volkswagen’s “strict quality standards and requirements” for its suppliers – and how it has won the trust of the German company “with high equipment quality and performance.”

The company considers the deal “a result of its global operation strategy,” which includes “European localised services” and agreements with core suppliers such as Siemens, ABB, and Festo. These partners have helped build a mature European local supply chain, so LEAD.

To expand its presence in Europe, the Chinese supplier is making an appearance at the Battery Show in Stutttgart this week in Hall 10, Booth H20. LEAD shows a production line for prismatic cells alongside the MES system for in-house lithium-ion battery production.

According to the manufacturer, the production line and MES system are modular and flexible. LEAD also lists functions for managing and optimising manufacturing, such as automated scheduling and transport, data uploading or intelligent analyses. This enables traceability and digital management of each component during production, thus improving quality and efficiency.

The Amarok will go in sale in diesel and petrol guise next year but an electrified version is coming. Battery electric and plug-in hybrid versions of the Amarok are being actively considered by Volkswagen as the company determines the best way forward as Euro 7 deadlines loom. Both the ...


View more: Volkswagen Amarok is going to be electrified by 2025 - but will it be plug-in hybrid or battery electric?