The Volkswagen ID. Buzz, an electric minivan inspired by the iconic VW Microbus, has finally entered production after years of anticipation. However, Americans will still have to wait to get behind the wheel of the new ID. Buzz, as Volkswagen is currently only producing the vehicle for Europe. Once it does get to the U.S, though, the ID. Buzz will have some unique features not seen in the European model.

Volkswagen is currently producing Volkswagen ID. Buzz models in Hannover, Germany, and the rollout is expected to be slow but methodical. Autoweek reports that the company only expects to produce 15,000 ID. Buzz units this year. Next year, Volkswagen expects to produce up to 130,000 units, which will again be exclusive to the European market.

The limited VW ID. Buzz units have been selling quickly. Automotive News Europe reported in August that there had already been more than 10,000 advance sales, with a majority of these sales coming from Norway and Germany.

Once customers begin receiving their ID. Buzz units, the hype will likely only increase for the much-anticipated Volkswagen. However, for American drivers, the wait will have to continue. The ID. Buzz will not reach the U.S. until 2024. 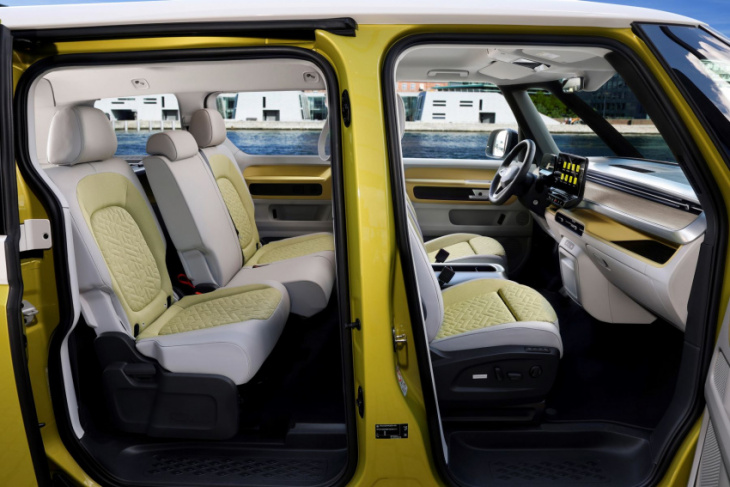 The Volkswagen ID. Buzz won’t be on American roads for at least another year, but there is an upside to the later arrival. When it does get to the United States, the ID. Buzz will have a few additions not yet seen on the European models.

According to The Drive, the U.S. ID. Buzz model will have three rows rather than two like the European models. This will make the ID. Buzz more similar to other minivans in America, like the Kia Carnival and the Chrysler Pacifica. Because of this, the third row of seating could make the electric Volkswagen minivan more competitive in the American market.

To accommodate for the added row of seating, the ID. Buzz in the U.S. will be longer than the European model. The Volkswagen sold in the United States will be 196.1 inches long, which is 10.6 inches longer than the European ID. Buzz. This added length is not necessarily a selling point for the new Volkswagen, but it will make it closer to the length of other minivans on the market.

What else is known about the American release of the VW ID. Buzz?

Once again, the Volkswagen ID. Buzz will arrive in the United States in 2024. An exact American release date has not yet been announced, and other new features may be added before the ID. Buzz finally arrives.

In terms of power, the Volkswagen ID. Buzz will come standard with a 201-horsepower motor, and early models will only feature rear-wheel drive. Range is one of the most important factors to look at in any EV and the European ID. Buzz gets a respectable range of about 260 miles per charge.

According to Car and Driver, Volkswagen will later release a dual-motor version of the ID. Buzz. This model will increase the power of the minivan to 295 horsepower, and it will give it all-wheel drive. For some drivers, it might be worth waiting for this dual-motor version, but it is not known when this variant of the ID. Buzz will make it to the U.S. The same Car and Driver preview states that the base ID. Buzz could be priced at around $40,000 when it finally comes to the American market.

Keyword: Volkswagen ID. Buzz Will Have Some Extras Available in the U.S. To Get Excited About